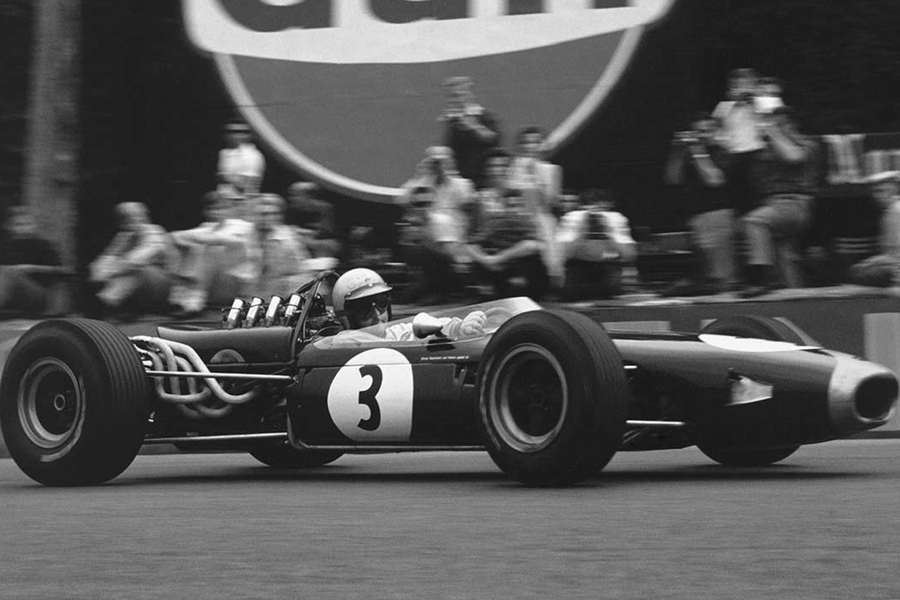 The Brabham marque returns to motor racing this weekend as a BT62 sportscar competes at Brands Hatch, and it it worth remembering that the name was for many years a force in Formula One, Brabhams winning 35 Grand Prix and taking drivers to four World Championships.

Having raced for Cooper, and become World Champion for them, Jack Brabham was keen to push car design further and faster than Cooper seemed happy with, so in 1961 set up Motor Racing Developments with Ron Tauranac to build race cars. The early cars were called MRDs, but soon became labelled as Brabhams (one oft-quoted reason possibly because if the initials were pronounced in French it had unpleasant connotations), and though the new team ran a Lotus 24 for Jack for the first part of the 1962 Formula One season, he took fourth in the last two races of the year in the new Brabham BT3 Climax.

A second place was the best result for Jack in the next three seasons, but it was when the change to three-litre engines came in 1966 that the team suddenly came to the fore. As other teams looked to develop state of the art new engines, Brabham adopted a V8 from  Repco in Australia, which while not the most powerful option was easily the most reliable and a run of four consecutive wins mid-season in his BT19 (pictured above)saw Jack take his third championship.

The Repco engine was still good enough in 1967 to take Brabham’s team-mate Denny Hulme to the title, the duo recording 14 podium finishes from 11 races and coming first and second in the final points. As well as Formula One, Brabham produced chassis for a host of lower formulea, many of which are still racing today, Jochen Rindt winning the first ever round of the European Formula Two series in a Brabham BT23 at Snetterton in March 1967.

The team was sold in the early 1970s to Bernie Ecclestone, and with Gordon Murray designing the cars produced some legendary, and successful chassis, such as the lovely BT44 (below) which took three wins in 1974 for Carlos Reutemann, and the famous BT46B - which with a fan sucking the car down onto the track won its only race in Sweden.

The team hit the heights again with Nelson Piquet in the 1980s, the Brazilian champion in 1981 and 1983, but once he left times were hard, and at the end of 1987 Ecclestone withdrew the team for Formula One. The name returned under new ownership in 1989 but was a shadow of its former self, notable only for giving David Brabham his only season of Grand Prix racing in 1990, and Damon Hill his debut in 1992.