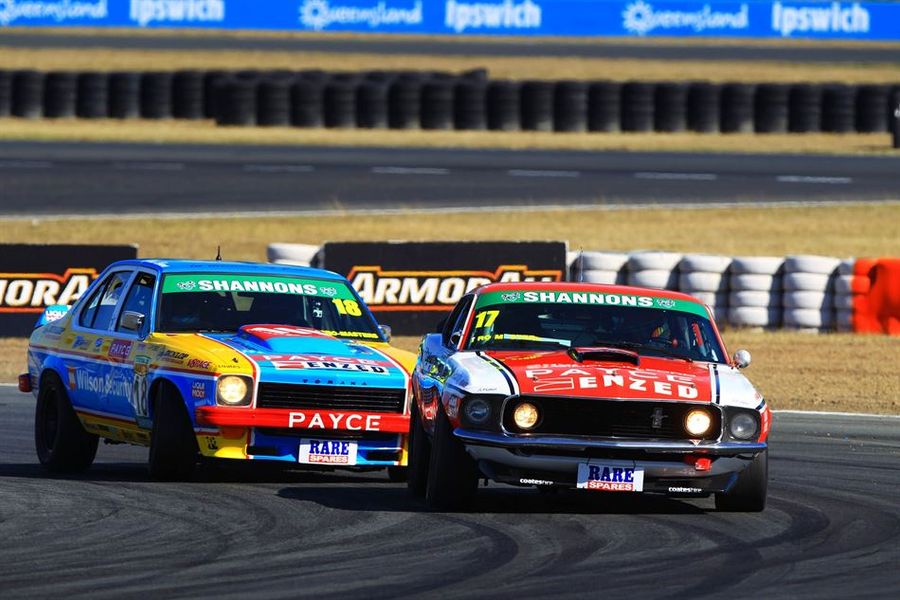 Neil Crompton will race John Bowe’s Ford Mustang ‘Sally’ in next weekend’s sixth round of the 2015 ENZED Touring Car Masters at Sydney Motorsport Park – however a two-way switch will ensure that Steven Johnson will retain his place on the grid as well.  Johnson, who has won three rounds from three starts driving Bowe’s famous Mustang this season, will trade US-built Ford for a genuine Aussie product at the Muscle Car Masters when he races a Ford Falcon XY GTHO instead. In a two-way deal with major sponsors PAYCE and Wilson Security and a fellow TCM racer, Johnson will drive a GT Falcon owned and once raced by regular TCM competitor Tony Karanfilovski at the popular Father’s day long weekend event. It will ensure the Johnson name continues on this year’s TCM grid alongside contemporaries the likes of Bowe, Miedecke, Richards and Seton – and now newcomer Crompton.  Johnson will retain Number 17 on the Falcon whilst Crompton will race with No. 7 on the side of the Mustang. “I’ve had to hand the keys back to ‘Sally’ to JB for the weekend, kicking and screaming, to allow Neil to drive the car,” Johnson said. N“Tony Karanfilovski races a beautifully built yellow and black Mustang in the series and also has an XY GTHO Falcon TCM car in his stable, and he was keen for me to drive it to help get the car sorted. “It’s a really well built car and prepared by Spencer Rice and his team at Classic Speed Shop in Sydney, and he really knows his stuff. I think we should be able to race somewhere near the front. Tony has indicated that the car could be for sale so let’s hope we can give it a really good send off at the Muscle Car Masters event and help get it to a good home after the weekend is complete. “I’ll miss driving ‘Sally’ but it should be a really good project for us and an exciting challenge.” Crompton said he was looking forward to trading in his usual Father’s Day routine for a turn behind the wheel of the Mustang. “It’s not often you get thrown the keys to an iconic race car like Mustang Sally, this is an incredibly generous opportunity thanks to John and his supporters Wilson Security and Payce and it is one I deeply appreciate,” he said. “You never lose the passion for race driving but as life changes the opportunities diminish. It’s not an easy thing to do well, especially when you’re low on mileage, so the best approach is be positive, relaxed and realistic. On that theme, realistically, I have no expectations other than to have fun and avoid trouble in that order.“As you can imagine, at my age, trading out of my Father Day slippers, dressing gown, a warm fire and a knitted blanket, for a day at the SMSP in the Mustang for Muscle Car Masters was an easy decision. Heaps of my paddock mates like Jimmy, Seto and Andrew have been urging me to do something like this for a while so it will be fun to semi relax away from my day job and enjoy the moment surrounded by many friends and colleagues.”Johnson said he was keen to taste success in TCM driving a locally-produced product. “I’d love to beat JB in the Torana driving an Aussie-built Ford,” Johnson grinned. “It would be like going back to the days when dad beat the likes of Peter Brock in his Commodore when he was racing a Falcon. It’s going to be tough though because there’s some great competition like Miedecke, Seton and Jim Richards so we’re going to have to work hard to keep our winning streak intact!” Bowe, who now sits third in the TCM ProMasters standings, said the Muscle Car Masters event was a great opportunity to ‘race with his mates’. “Neil Crompton and I have been good mates for more than 30 years. He's a very fine racing driver and there is no better student of the sport - and I enjoy seeing my mates’ race. That's about the whole long and the short of it really. Sure, I expect him to be a bit rusty but you never forget how to do it. I have no expectation from Neil, I just want him to have a ball because that's what Touring Car Masters is about. “Stevie J is helping sort out Tony Karanfilovski's GTHO it left the seat in Mustang Sally vacant and I couldn't think of anyone more worthy and I trust than Neil Crompton. My friends at Wilson Security and Payce thought it was a great idea so now it's a goer.”

Our February Podcast is Fast and Loose!