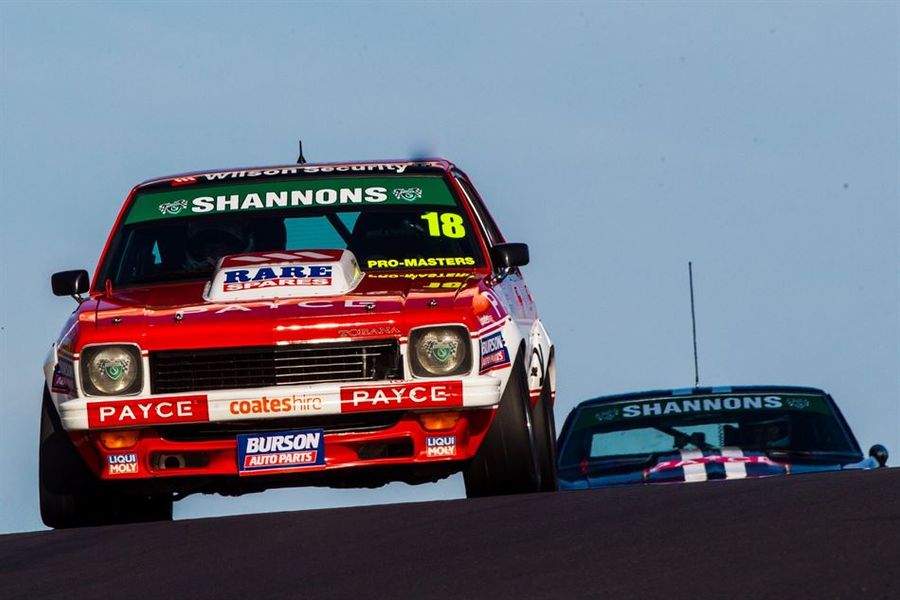 They are one and two in the championship and true to form it was John Bowe and Adam Bressington one and two in practice today at Mount Panorama. Bowe’s 2m18.9127s lap set to top practice two usurped Bressington’s 2m19.6731s benchmark that stood at the end of the first session, the pair ending the day in that order.
Revelling in perfect conditions and temperatures hovering in the mid 20s, Bowe’s lap was 0.7 seconds behind the existing pole record – also held by Bowe – and only 0.3 seconds behind the race lap record. Bressington topped the first session, run earlier in the morning on a slower and green race track.
Ryan Hansford was third fastest overall, his 2m20.1176s lap slotting him in behind Bressington and just in front of fellow title contender Steven Johnson. The Multispares Torana enjoyed a solid day despite running off the road at the chase in the first session, prior to hitting traffic and slowing a potentially quicker lap.
Johnson’s quiet day netted him a solid fourth place, while teenager Adam Garwood was a stout fifth on the combined times in his Holden Torana. Though he was a winner before, Garwood was a breakout star of last year’s Bathurst round when he stormed through the field driving a Ford Capri Perana.
His pace has continued to develop across the last twelve months with his 2m20.53s lap placing him third on the road in the second session.
Eddie Abelnica was sixth in the Melbourne’s Cheapest Cars XB Falcon, despite battling rev limit issues in practice one earlier this morning.
Jim Richards was seventh overall in the Shannons Insurance Falcon Sprint, while Tony Karanfilovski slotted into eighth overall in the TIFS Mustang. The Sydney driver was one spot in front of the returning Brad Tilley and his Falcon GTHO. The popular Sydneysider – a cult hero to many TCM fans – returned to the track in his iconic Green Falcon today following a two-year rebuild.
Having raced a Ford Mustang in the intervening period, Tilley adapted quickly to the Falcon’s very different driving style to post competitive times in both sessions today
Andrew Fisher completed the top-10 in the Jesus Racing XY GTHO, returning to the track this weekend with a brand-new engine powering his still-new car.
Bruce Williams’ AC Delco Torana just missed the top 10, but 11th overall was a solid return to the track despite enduring several engine issues throughout the day.
Today’s two 20-minute practice sessions ran mostly trouble-free, however there was no chance of the category escaping a traditional Bathurst hard-luck story.
In his freshly-rebuilt XB GT Hardtop Falcon, Keith Kassulke was only one lap into the first practice session when he turned into the left-hand corner just before McPhillamy Park. Unfortunately, the Falcon refused to turn with either a tyre issue or a mechanical failure thought to blame. The car made hefty contact with the wall and spun across the circuit, stopping in the runoff area on the left of the circuit adjacent to the McPhillamy Park gates. Kassulke was unhurt in the incident, however the Falcon will again require significant repairs before again returning to the track.
Porsche runners Rohan Little and Sven Burchartz also endured dramas; Little in the pits with oil leaking from his 911 IROC Challenge car in practice two, while Burchartz failed to log a time in his sister entry.
A simple Saturday for TCM will see the cars hit the track for qualifying bright and early in the morning at 8:10am – with the first race not set to run until Saturday morning.
Combined Practice Times:
1  John Bowe (Holden Torana SL/R) 2m18.8127s
2  Adam Bressington (Chevrolet Camaro SS) 2m19.6731s
3  Ryan Hansford (Holden  Torana SL/R) 2m20.1176s
4  Steve Johnson (Ford Falcon XY) 2m20.2311s
5  Adam Garwood (Holden  Torana A9X) 2m20.5315s
6  Eddie Abelnica (Ford Falcon XB Coupe) 2m21.0906s
7  Jim Richards (Ford Falcon Sprint) 2m22.1865s
8  Tony Karanfilovski (Ford Mustang Trans Am) 2m22.6185s
9  Brad Tilley (Ford Falcon XY GT HO) 2m22.8215s
10  Andrew Fisher (Ford Falcon XY GT HO) 2m23.1042s