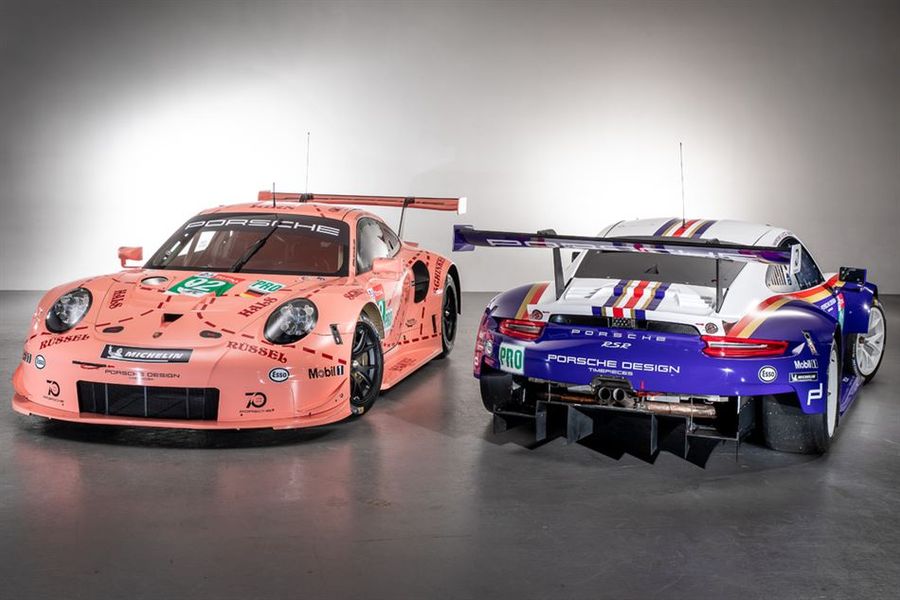 Porsche will field two special Porsche 911 RSRs at this year’s 24 Hours of Le Mans, the factory-run cars will compete sporting two traditional Porsche Le Mans liveries of the 1970s and 1980s. The #91 contender is decked out in the iconic blue-and-white finish with red and gold stripes, reminiscent of the Rothmans sponsor colours of that era. The #92 car adopts the famous “Pink Pig” design of the 917/20 from 1971. Porsche unveiled the two circa 510 hp racers yesterday at the official test for the Le Mans 24-hour race.

The retro-designs are an element of Porsches celebrations of 70-years of their sportscars: “With these much-loved designs, we want to thank our loyal supporters who have cheered for us both on and off the track at every race, but particularly at Le Mans, where we as record winners with 19 outright victories received incredible support every year,” said Dr Frank-Steffen Walliser, Vice President Motorsport and GT Cars.

The finish of the number 92 car, shared by race drivers Kévin Estre (France), Michael Christensen (Denmark) and Laurens Vanthoor (Belgium), harks back to the Porsche 917/20 that tackled Le Mans in 1971. This one-of-a-kind race car was designed to combine the aerodynamic advantages of the short and long-tail versions of the 917 and thereby ensure that the previously untested car would win the qualification.

The 917/20 was dubbed the “Pink Pig” due to its pink paintwork with sections of the car labelled in butcher-style cuts. The idea implemented under the Porsche designer Anatole Lapine caused a stir at the Sarthe and the car was also referred to as the “Truffle Hunter”.

2018 is a good year for retro-liveries on Porsches, with in the UK a category in the popular Porsche Club Championship featuring 16 early Boxsters all racing in classic Porsche liveries, and we will be bringing you picture of this very soon!