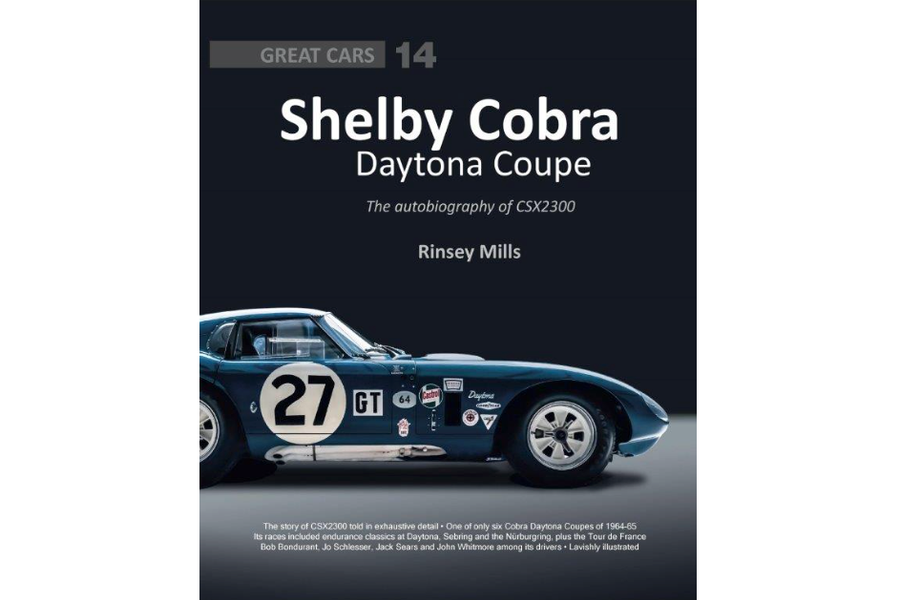 In his foreword to Great Cars: Shelby Cobra Daytona Coupe, Peter Brock, the Director of Special Projects at Shelby American from 1962-65, observes: “There have been many words written about the Shelby era but relatively few that focus on this most intensive early period with the Daytona Cobra Coupes.” Here the story is told in unprecedented detail and with special emphasis on one of the six Coupes built. Author Rinsey Mills, the writer of Shelby’s authorised biography, draws on first-hand accounts from Shelby American drivers and team members, and shares many period photographs never previously published.

The Daytona Coupe was created with the ambition of dethroning Ferrari as the kings of sports car racing, and in 1965 it did just that. Despite the Ferrari factory’s greater experience, and despite the all-round competitiveness of the Italian marque’s 250 GTO, the Daytona Coupe defeated Ferrari in the large-capacity class of the FIA’s International GT Championship – a prize not won before or since by any other American manufacturer.

This book by Rinsey Mills looks at all the Cobra Daytona Coupes’s significant races in 1964 and ’65, and in particular detail at the five races contested by chassis CSX2300. This car played an important role in the Shelby team’s success and is a worthy addition to Porter Press’s Great Cars series.

Story highlights
- The design evolution and development of the Daytona Coupe, with insights from the car’s designer, Peter Brock.
- All 16 events in Shelby’s two-year campaign with these cars, starting with the 1964 Daytona Continental (forerunner to the 24-hour race there) which gave the model its name.
- Detailed coverage of the five events entered by CSX2300: the Tour de France in 1964 and the following year’s Daytona 2,000Km (Continental), Sebring 12 Hours, Nürburgring 1,000Km, and Reims 12 Hours.
- Brief biographies of the eight men who raced CSX2300: Bob Bondurant, Jochen Neerpasch, Allen Grant, Ed Leslie, Jo Schlesser, André Simon, Jack Sears and John Whitmore.
- Stand-alone stories on race team entrants Alan Mann Racing and Ford France.
- CSX2300’s life after 1965, including a spell racing in Japan.
- More than 300 period photographs, many published here for the first time, plus a portfolio of specially-commissioned photography.