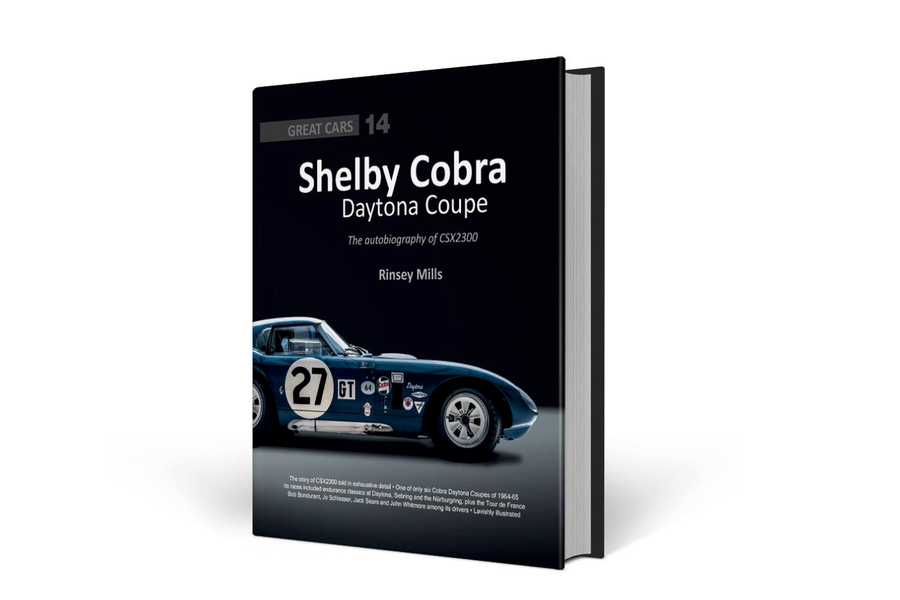 You can now obtain a 10% reduction on the cover price of this and other selected Porter Press publications by using code HRN10 on their website!

Porter Press have produced a brilliant series of books called the ’Autobiography of Great Cars’ and this new release is number 14 in that series. The book ‘Shelby Cobra Daytona Coupe’, the autobiography of CSX2300 by Rinsey Mills, is inevitably a huge and fascinating tome and the book covers all of the Shelby Daytona cars.

Shelby only built five Coupes so their histories are closely intertwined, but the story starts with the early days of the original AC Cobra and the book goes right up to the present day. The story of how Carroll Shelby originally had the idea of putting a meaty American Ford V8 into the very British AC Ace is well trodden ground but nonetheless sets the scene excellently for what is to follow.

Largely the book is chronological, starting with explanations of the team Shelby built around himself and explaining the small group that put together these brilliant cars from concept to reality. The explanations of the evolution of the Daytona coupe are intriguing and allow us to understand that with Ford’s help and blessing, the new design came about. However, Ford were reluctant to fund the slippery coupe in the beginning, their attention had become diverted to the GT40 project, and it was Shelby’s tyre supplier who came up with the money to start the ball rolling.

The Cobra in its original form was being outpaced and outclassed by the red cars from Maranello, particularly the Ferrari 250 GTO, and Carroll clearly understood the need for something with a higher top speed and that the aerodynamics of the somewhat agricultural Cobra were never going to supply this, hence the beginning of the Daytona story. Five cars were ultimately created and Mills explains in fine detail the gestation of these beautiful race cars with the original car CSX2299 being the first off the line, built to Peter Brock’s iconic design. Another piece of pub-quiz trivia is that all the ‘proper’ Cobras had CSX chassis numbers. This came from the very first car to be sent from AC’s Thames Ditton factory to Shelby, the CSX simply standing for ‘Carroll Shelby Export’.

The book is liberally peppered with fabulous photos from the era and anybody on either side of the Atlantic who witnessed these cars racing in period will be transported back very quickly to Daytona or to Brands Hatch and all points in between. The early days of CSX2300 are explained and are intertwined in some detail with both the highs and lows of the Daytona project. 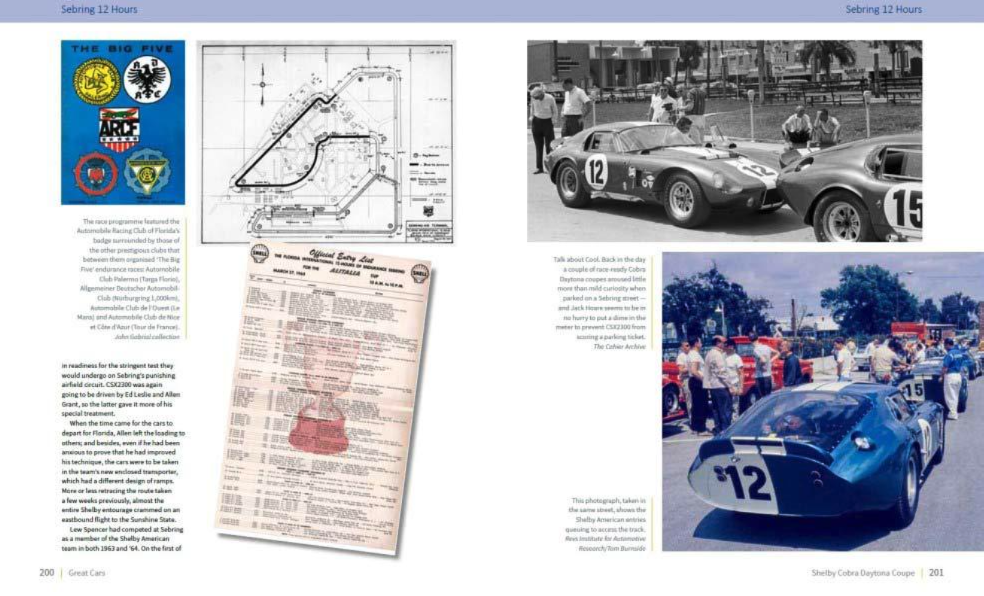 Photographs from Le Mans in 1964 take you straight back to those times, the blue with white striped Shelby cars lining up against Ferraris, Ford GT 40 years and Porsches. That outing resulted in a fourth overall and first in class for CSX2299 with Dan Gurney and Bob Bondurant at the wheel and sets the scene for the remainder of the year.

Particularly interesting are the photographs from the Tour de France of 1964. A little covered event but when we come to look back at the start in Lille, in northern France, and races at Rouen, Reims and Le Mans, the Cognac mini circuit, then to Grenoble, off to Monza in northern Italy and then finishing in Nice must have been a superb spectacle. The photographs which accompany this particular chapter are utterly superb and the author must be congratulated on putting together a record of this amazing and often overlooked event.

The roles of Carroll Shelby and Peter Brock are explored in some detail but so is that of Alan Mann the English racing enthusiasts who had entered cars for Ford in UK and European saloon car racing. He was contacted by Ford to take the weight from Shelby who by then was heavily involved in the GT 40 project and hence we saw Alan Mann Racing being the entrant in Europe of these cars, now in Mann’s beautiful red and gold colour scheme, covered in some detail. As people like Ford of France became involved the cars changed from their traditional blue and white to a number of different liveries.

However most motor sports enthusiasts will agree that this is one of the most beautiful race cars imaginable. When you think that's the most lusted after race car of all time is the Ferrari 250 GTO, they built 39 of those (of which all 55 still exist!) Whereas the Shelby Daytona is rarer with only five chassis is ever completed.

The book talks about the main drivers in detail Bob Bondurant Jochen Neerspach, Alan Grant (interestingly because he is little known in the UK) Ed Leslie Joe Schlesser, Andre Simon, Jack Sears and Sir John Whitmore are all featured, with in-depth racing biographies of each of them.

it would be a mistake to end the story in 1965 and this book brings the story up to date with stories of antics since then such as Goodwood Revival and various concours events as well. Sadly, the extreme value of each of these cars means we are unlikely to see the heroics performed by Tom Kristensen and Kenny Brack at the Sussex circuit any time soon.
You don't need to be an outright Shelby or even Cobra fan to enjoy this book. It is as much a history of 1960s GT racing as anything else and a thoroughly good read because of it.

The book is available from Porter Press at porterpress.co.uk or from all good motoring booksellers priced at £60.00. 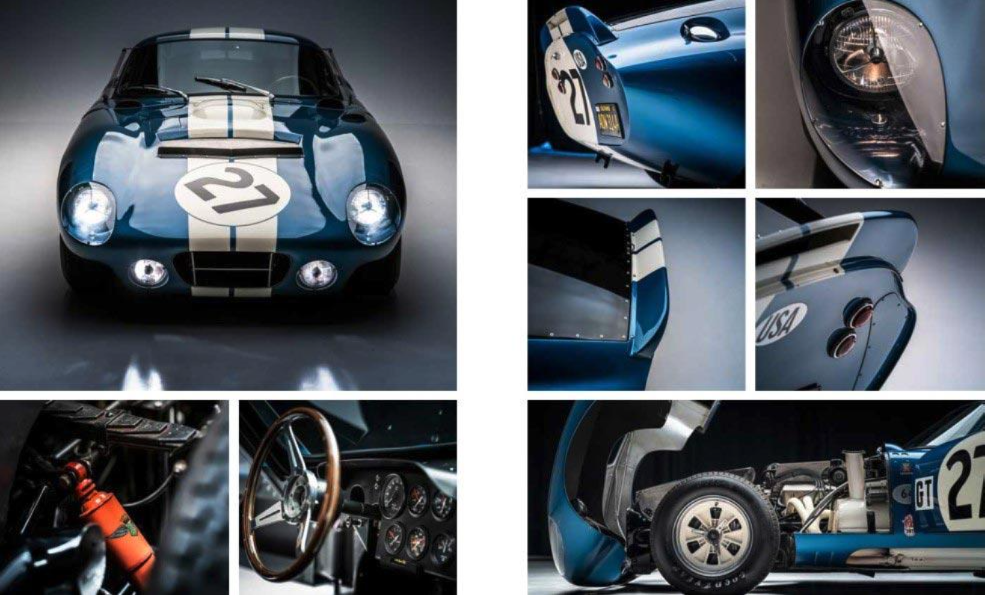