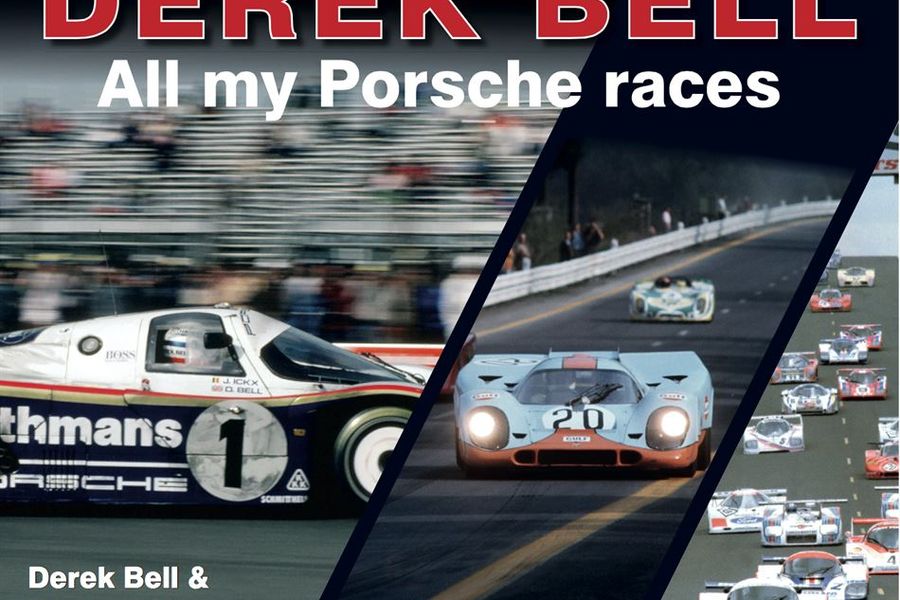 When you start with a Porsche 917, you would think that the only way was downhill but this fascinating book gives a drivers-eye view not only of the cars, but also of the people and politics surrounding 47-years behind Porsche steering wheels.
A lengthy introduction talks about some of the non-Porsches that ‘DB’ raced, giving a useful perspective on what got him to the forefront of sportscar racing for so long.
Co-written with Richard Heseltine, the book makes no pretence about being written in the first person. Heseltine has provided a very strong framework, into which have been woven very many quotes from Bell giving depth and flavour to the stories.
This could very easily have been a long list of year-by-year races but instead the stories come to life with Derek Bell’s insights into the behind-the-scenes happenings. He pulls no punches either; talking about Le Mans in 1988, for example, when Klaus Ludwig tried to get an extra lap from the Shell sponsored factory 962 and ran out of petrol a mile before the pits.
Talking about what Derek sees as a missed win, he says “what did for us was Klaus playing silly buggers three hours in. I like Klaus and have nothing but respect for his talent as a driver. On the right day he was near unbeatable. Even when things weren’t going his way, he was still always up there.  You only have to look at his resume to know that he won a lot of titles and major races.
“I don’t know what was going through his head when he decided not to pit on the scheduled lap and stay out for another tour.  He ran out of fuel at the Porsche Curves with a mile of the lap left to go.  Klaus got the car back to the pits on the starter motor, and was not warmly received by his team mates. We felt like murdering him!  His stupidity cost us two laps”.  A master of British understatement, is Mr Bell!
The book is heavy with excellent photographs of the cars Derek Bell drove throughout a long career, and going through the book you realise just what a varied and amazing career the five-times Le Mans winner has had.  And this is ‘just’ the Porsches!
Writing this book from an end-of-career perspective has allowed Bell to be sanguine about some of the tragedies as well as the triumphs and Derek Bell the man comes across every bit as much as the driver.  Indeed in our audio interview with him (available at HistoricRacingNews.com) he talks freely and fully about the friends and colleague he has lost over his long career, eventually guiding his decision not to take part in Le Mans Classic 2018.
The book lends itself to being a casual read, the races and cars being separated by date and venue, and it was my intention to do just that.  But the narrative is so readable and the stories so candidly interesting that I read the whole thing in one sitting.  I have since gone back and re-read different parts as well because, though this is a very readable book, there is a wealth of reference material in there as well.
However you read the book, we are sure that every sportscar racing fan, on either side of the Atlantic and beyond will find this an excellent way of remembering some of the greatest times in sportscar racing, recalled by one of the finest exponents of the sport.

The book has 276 pages with over 200 photos, many in colour. It is avaliable from www.derekbell.com and https://porterpress.co.uk.