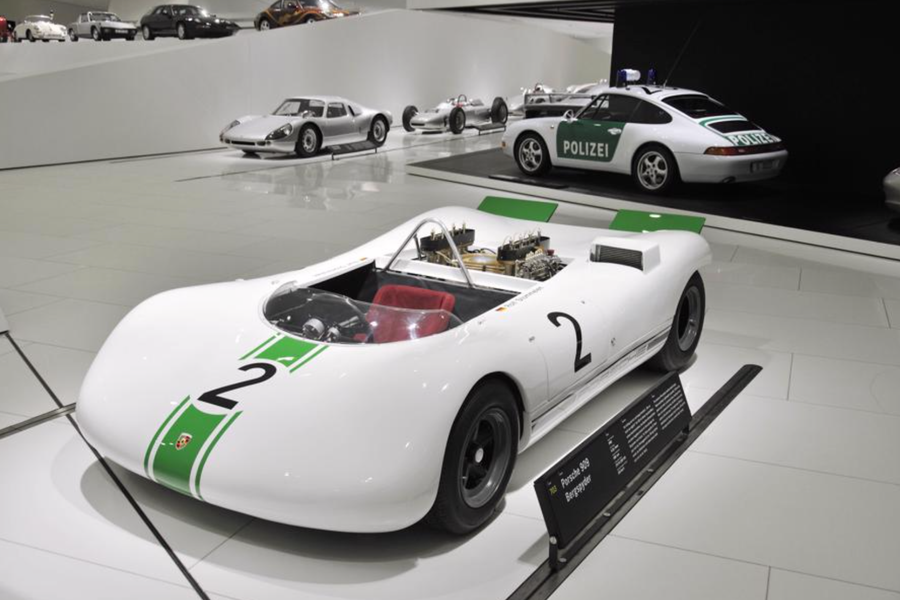 As ever Porsche have a strong prescance at this week's Goodwood Festival of Speed, 4th - 7th July, with historic cars on show and taking on the hill, with in  most cases, Porsche motor sport personalities from the past and present will be behind the wheel, underlining the unique family spirit that still imbues the company to this day.

The Porsche Museum has gathered together a stunning line-up of icons from its collection in Stuttgart which this year will take visitors on a journey through the evolution of lightweight sports car technology.

The Porsche tradition of intelligent performance is clearly evident in the remarkable 909 Bergspyder from 1968; here, the design of the car clearly shows what could be described as the essential Porsche DNA. Most notably, a mid-engine layout, a ‘boxer’ engine design, two-seats, and a lightweight construction to ensure the highest possible performance and efficiency. In the case of the 909 Bergspyder, the focus on lightweight design extended to a minimised fuel tank design and exotic, lightweight materials in the braking system. This remarkable car is making its UK debut at Goodwood after running for the first time in over thirty years at the Gaisberg Hillclimb in Austria at the end of May.

2019 also marks the 50th anniversary of the iconic 917 sports racing car, which built its reputation on victories at legendary race tracks like Le Mans, Spa and Daytona. An impressive line-up of 12 chassis will be present to celebrate at the Festival of Speed, including an evocative ‘Gulf’-liveried race winner from the Porsche Museum collection.

UK debut: 1968 Porsche 909 Bergspyder
Only two examples of the 909 were ever built, and they were the lightest cars ever to roll off the Porsche production line. The race-ready car weighs just under 384 kg, including fuel. With a 275 PS, 1,981 cc, flat-eight engine at the rear, this gives a power-to-weight ratio of 1.4 PS per kg. The fibreglass body weighs just ten kg. The frame is made of aluminium, and the coil springs of titanium. The car did not have an alternator or fuel pump. Instead, the power and fuel supply came from a silver battery and a pressurised petrol bladder. Two movable rear spoilers are connected to the wheel suspension, an idea that was later adopted in the first Porsche 917. Built for racing in hillclimbs (hence Bergspyder) the model nevertheless had a short motorsport career. In 1968, one of the two 909s was raced twice before Porsche turned its attention to circuit races and rallying.

1970 Porsche 917
The 580 PS flat-twelve cylinder 4.5-litre engine of the 917 set new standards. Changes in the racing regulations in 1969 motivated Porsche to build the car. Prototypes were allowed a maximum engine size of 3.0-litres, and for sports cars 5.0-litres were allowed. However, a series of at least 25 had to be built. The 1969 race season allowed the 917 to become fully race-proven, with the result that the car entered 1970 with its reliability assured and finely-honed aerodynamics which further improved its track behaviour. At that time, the factory did not enter the cars directly, but via its close partners, John Wyer Automotive and Porsche Salzburg; nevertheless, the World Championship for long distance sports car racing proved to be a triumph for Porsche. Despite fierce competition from Ferrari, the blue and orange, and red and white 917s won almost every race. 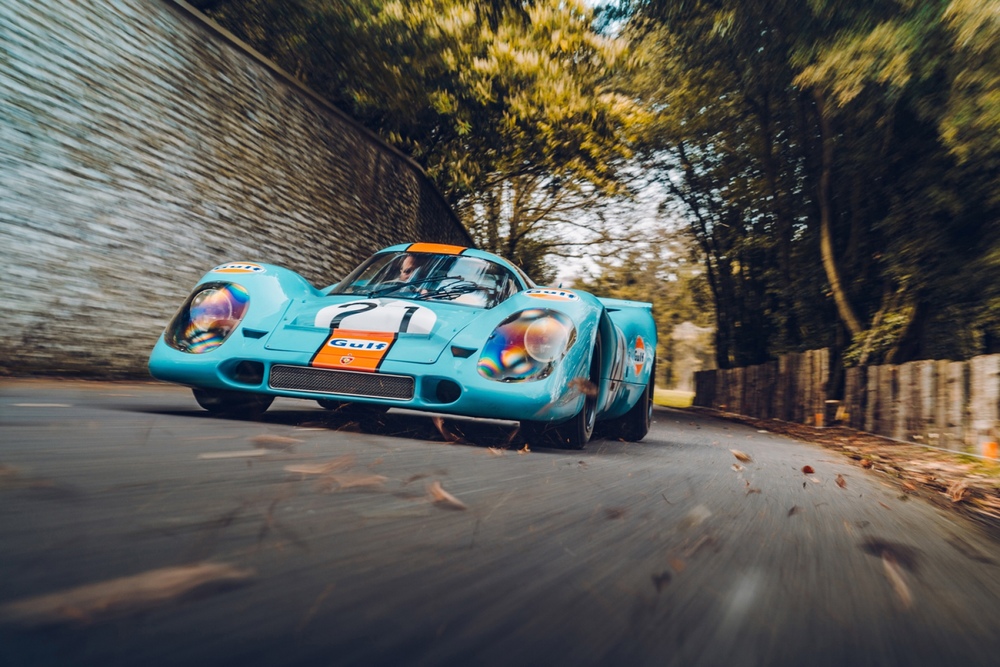 The Le Mans 24 Hours race was particularly important, as Porsche had not been able to score an overall victory to date. In 1970, seventeen 917s participated and two completed the race – in first and second places. The winners were Hans Herrmann and Richard Attwood in number 23. Attwood joins Porsche for Goodwood, reunited with the 917 once again in the demonstration hillclimbs.

Immortalised in its iconic ‘Gulf’ livery by Steve McQueen in the movie classic, Le Mans, the speed and success of the 917 resulted in it becoming a popular choice for private entrants racing in the sports car World Championship. A total of 59 examples of the 917 were built, 41 as short or long-tail coupes, and 18 as Can-Am or Interserie Spyder versions with 1,400 PS turbocharged engines.

1970 Porsche 908/03 Spyder
Weighing a mere 545 kg, this Spyder is a further demonstration of extreme lightweight construction, its foam-reinforced plastic bodyshell accounting for a mere 12 kg. The driver and the 350 PS 3.0-litre flat-eight engine were moved forward to optimize the weight distribution. The factory team raced the 908/3 Spyder only four times, but won three of those four races; including its premiere in 1970 at the Targa Florio in Sicily, with Jo Siffert (CH) and Brian Redman (GB) at the wheel.

1976 Porsche 935 ‘Baby’
In just three months, a car for the 2.0-litre class in the domestic German race Championship is developed from the successful 935. The regulations dictate a smaller engine capacity, so a 1,425 cc version of the turbocharged flat-six power unit is created. With this accomplished, the victory by Jacky Ickx (B) around the Hockenheim circuit effectively demonstrates that Porsche can be competitive across the categories in motor sport. 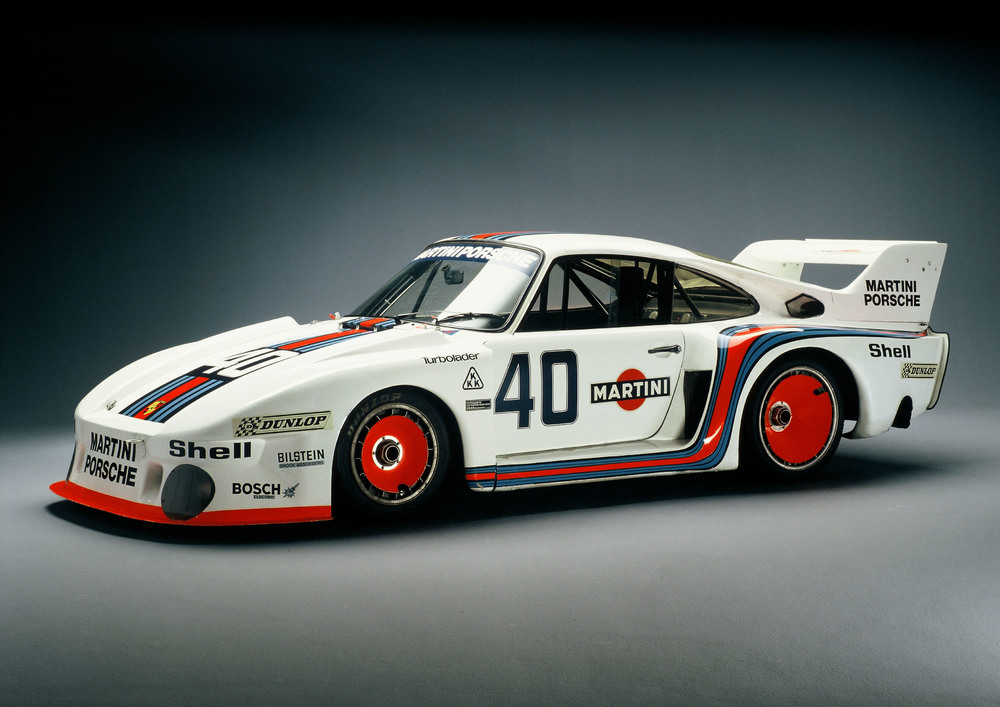 Lightest Ever Competition Porsche to Star at Goodwood