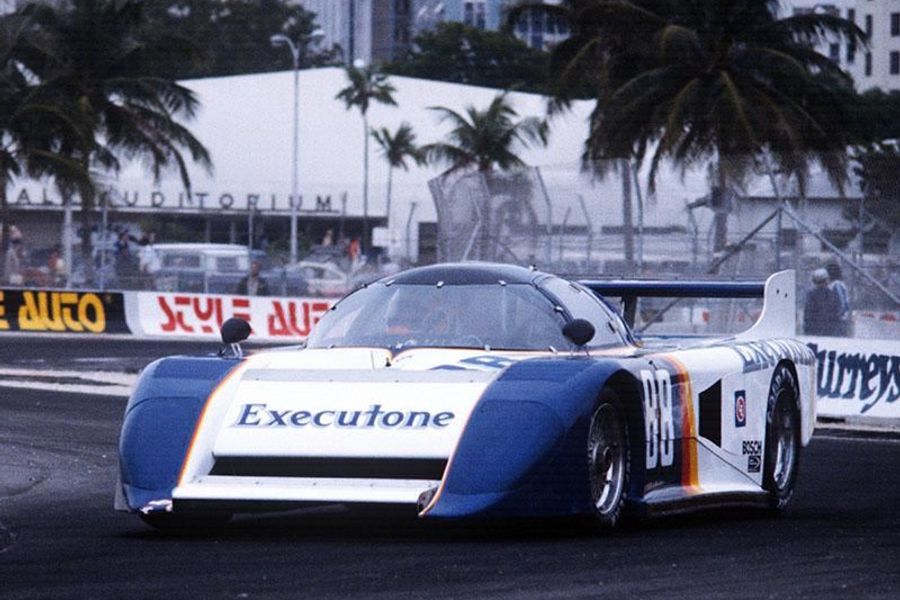 Accomplished motorsports designer and engineer Adrian Newey will be reunited with a race car he designed and ran at Daytona International Speedway when he makes his North American competition driving debut in the third edition of the Historic Sportscar Racing (HSR) Classic 24 Hour at Daytona presented by IMSA, November 8t -12th.
Entered to co-drive a 1983 March 83G in the Classic 24 Hour at Daytona with Greg Thornton and Brad Hoyt, Newey will be competing in one of his earliest projects. The Executone March 83G Chevy the trio will share in the Classic 24 Hour is the same exact race car Newey and his team guided to a near victory in the 1983 24 Hours of Daytona.
Newey is best known for his designs that have won numerous Formula 1 driver and constructor titles and over 150 Grand Prix races. He has been with Red Bull Racing Formula 1 since 2007 as the team's Chief Technical Officer. The four-straight World Championships Red Bull and Newey earned from 2010 through 2013 made him the only designer to F1 win titles with three different constructors.
The earlier championships came with Newey designs for Williams F1 and McLaren, with those accomplishments preceded by success in Indy Car racing in the 1980s and, before that, an unexpected foray into sports car racing.
"My very first job was an aerodynamicist at Fittipaldi F1, followed by moving to March as a design draftsman during the week and a race engineer on Formula 2 weekends," Newey said. "That was 1982, and toward the end of the year I saw the March 82 sports car lying around rather unloved after having performed poorly at Le Mans. So, I approached Robin Herd, the boss of March and said 'could I have a go at modifying it?' He said 'yes, but there was no budget for wind tunnel testing or anything like that, you'll have to do it on your own and get it ready for the GTP championship in America.' So, that's exactly what I did."
Newey worked tirelessly on that first March 83G, right up until he and two March mechanics turned up in Daytona for the 1983 24 Hour race.
"I redesigned it, re-did the aerodynamics by eye, which is always a dangerous thing, and got some weight out of it," Newey said. "Robin sold that first car to an American, Ken Murray, who entered it for the Daytona 24 Hour race. We had one brief shakedown in the UK with Tiff Needell in Donington and off we went. Through practice we weren't very competitive, and the car kept breaking down, it was very new. Going into the race we had been up for about 48 hours, between keeping it running through practice then qualifying. We thought we would run for an hour or two and then break down and we could get to bed."
Sleep would have to wait, however, as Newey's hard work and preparation over the previous months paid off. Co-drivers Marty Hinze, Terry Wolters and Randy Lanier found the March both reliable and quick, moving into the overall race lead in the overnight hours.
"I clearly remember, because the girls who did the timekeeping got lost, so at about two or three o'clock in the morning, I wandered off to the toilet block and looked up to see the scoring tower with the number at the top," Newey said. "Going to the loo and standing there and thinking '88, 88? I know that number - that's us!' And so we led from about the 12th hour through to about two hours from the end when it started raining and the Chevrolet engine got a misfire. We finished second and it was that second place that really launched my career."
Over the last dozen or so years, Newey has added driving to his list of motorsports endeavors.
"I guess my driving has sort of been a bit of a mid-life crisis perhaps," Newey said. "My focus has obviously been on designing and engineering the cars, but then having done a few long-distance historic rallies, I got into racing in about 2004. I have since competed in various races, initially historic races but also the Le Mans 24 hour race in a Ferrari GT2, the Goodwood Revival and other bits and pieces so on and so forth."
The return path to Daytona for Newey started at another premier historic race.
"The opportunity came about when I competed in my Lotus 49 in the Monaco Historique in 2016 when I met a chap there, Greg Thornton, who also has a Lotus," Newey said. "He subsequently mentioned that he was taking the Executone car, which I ran at Daytona in 1983 all those years ago, to the Classic 24 Hour, and if I would I like to co-drive."
Thornton and Hoyt are also linked through historic racing.
"Greg and I are great friends having met in historic Formula 1 racing," Hoyt said. "I was thrilled to hear he had acquired the March 83 and that he remembered attending the Daytona 24 Hour race as a spectator. Watching Adrian Newey drive one of his first creations some 35 years on - even as he remains the greatest mind in F1 today - will be very special. If Lady Luck smiles on us, I will lean hard on Greg and the boys to return for the Classic 12 Hour at Sebring, where we will headquarter the team in our shop."
Newey will be happy to just return to Daytona and reunite with one of his earliest success stories with the March 83G.
"I've heard very good things about the Classic 24 Hour at Daytona," Newey said. "For me to go back there, well, many years later, having been there for the first time as a very young engineer, and to be reunited with that car at Daytona will be very special."