Wills and Littlejohn take GT40 to victory at Brands 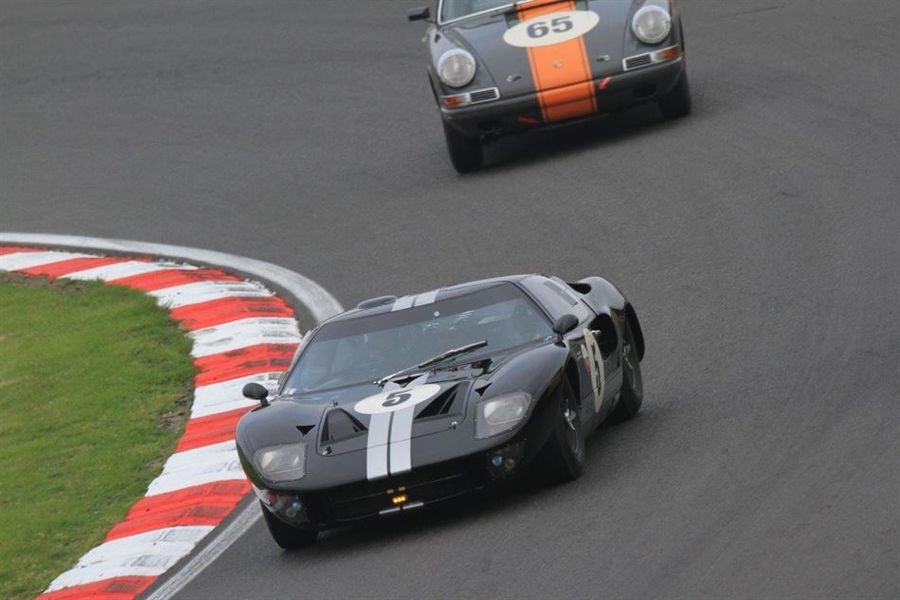 Roger Wills and James Littlejohn triumphed in a huge entry of Pre-66 GT and touring cars in the opening Masters Three Hours race at Brands Hatch at the weekend, the Kiwi’s Ford GT40 being unstoppable. Pole position advantage for The Masters Three Hours did not last long for Roger Wills’ Ford GT40, which was demoted to second by Tony Wood and then dropped to third by lap three when Andy Wolfe took the lead. Michiel Campagne made a great start from 12th to rise to fourth as leader of the NKHTGT class and the GTB class was headed by the Mike Whitaker TVR in fifth, until overhauled by Peter Thompson and John Spiers. In GTA, the Billy Bellinger-driven Morgan held a 10-second advantage over Graham Wilson’s Elan ahead of the Elan of Mark Martin.With two hours to run, the top three GT40s were static with the lead car holding a ten second advantage in the hands of Andy Wolfe from Tony Wood and then a further three second gap to Roger Wills. The GTB class was led by John Spiers (TVR Griffith) from Peter Thompson’s similar car.On lap 17, Roger Wills found a way past Tony Wood to take second place in the GT40 battle and Billy Bellinger had hauled a 30-second lead over Mark Martin for GTA honours. The GTB class was kept interesting by a tight battle between Andy Willis and Chris Chiles Sr in their AC Cobras until the Chiles Cobra appeared to develop an issue at the right rear, which caused the car to drop back.John Spiers pitted from fifth on lap 20 but brake failure prevented him from handing the TVR to Benji Hetherington, just as Gary Pearson came in to hand over the Cobra to Carlos Monteverde, taking on plenty of fuel as they did so. On lap 23, the Peter Thompson Griffith came in with possible brake trouble, leaving Mike Whitaker with a 20-second cushion at the lead of the GTB and seventh place, prior to handing over to Nigel Reuben as their first driver change.After one hour of racing, fewer than 20 seconds separated the three leading GT40s with Michiel Campagne remaining in the lead of the NKHTGT class having made his pit stop. Andy Willis was leading GTB but would not stop until lap 40. More than half the field had already pitted by this point.On lap 36, Roger Wills pitted from second to hand over to James Littlejohn, elevating Tony Wood’s GT40 to second, just as Ron Maydon came in to swap over with James Hagan from fifth place. Two laps later, Tony Wood pitted for fuel and to hand his GT40 to Martin Stretton, leaving Andy Wolfe (Ford GT40) briefly in the lead until he also pitted on lap 40 to hand to Jason Wright. After the pit stops, with still an hour to go, James Littlejohn (in for Roger Wills) relieved Jason Wright from the lead, with Stretton running third, while Michiel Campagne ran 12 seconds behind. The GT40s were still running 1-2-3, with only 15 seconds between them, as Martin Stretton also got past Jason Wright for second. Only Billy Bellinger was left to pit, running in sixth, with Nigel Reuben (in Whitker’s TVR) in the lead of GTB.On lap 49, the Whitaker/Reuben TVR stopped to take on fuel and Eugene O’Brien, handing the lead of GTB to Rob Hall’s Cobra. The 90-minute Dutch NKHTGT race was flagged with Michiel Campagne taking a convincing victory from Tom Kuiper (Chevrolet Corvette) and Andy Newall/Rhea Sutter (Jaguar E-type).  With a clearer track, the race was on for the lead, Martin Stretton (in Wood’s GT40) being 18 seconds away from James Littlejohn (in Wills’s Ford) with just half an hour to go. At this point, Roger Wills was praying there wouldn’t be a safety car to cost them a hard-earned lead…On lap 60, the AC Cobra of Chris Chiles Jnr sufferedd brake failure at Hawthorns, dropping away from its fifth place and second position in GTB. This elevated the O’Brien TVR to second in class, ahead of Simon Hadfield (Aston Martin DP214). With 15 minutes to go Littlejohn set a personal best lap time as he managed the gap to Stretton behind. Stretton countered with fastest lap of the race, shortening the gap to 16. 8 seconds. Behind them, Jason Wright held a strong third ahead of the class-leading Cobra of Rob Hall. Andrew Haddon (Lotus Elan) was leading GTA by 50 seconds from the Keith Ahlers Morgan who was being reeled in fast by Nigel Greensall in the Elan.With just two laps to go, Nigel Greensall took ninth place and second in GTA after a long pursuit of Keith Ahlers. James Littlejohn held on to give Roger Wills the win ahead of Martin Stretton/Tony Wood with Jason Wright/Andy Wolfe in third. GTB was won by Rob Hall/Andy Willis, with GTA won by Mark Martin/Andrew Haddon.   School