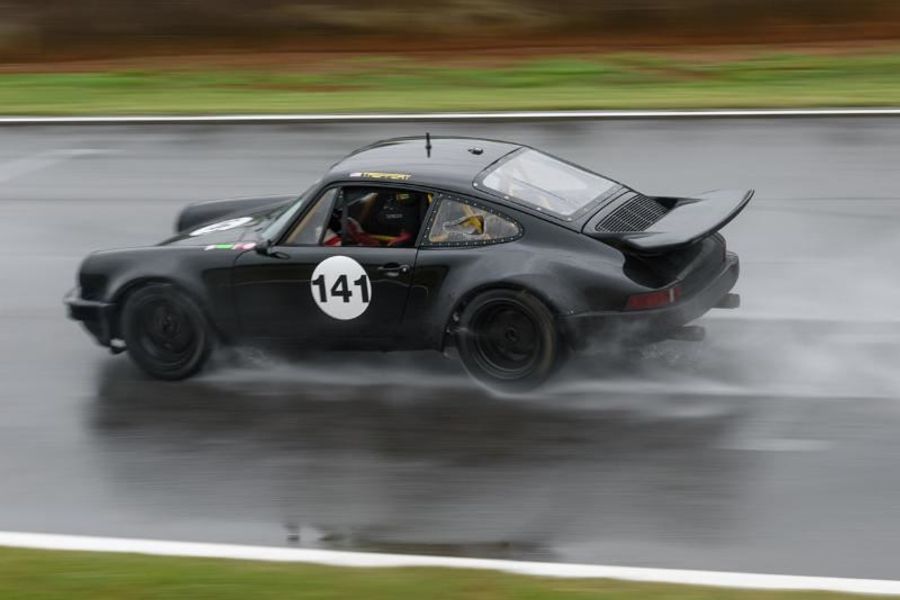 Day-long rain showers didn't come close to dampening the competitive spirit and camaraderie of the 40th Classic Motorsports Mitty presented by Hagerty and sanctioned by HSR that came to a wet but successful conclusion on Sunday at Road Atlanta.
The day’s schedule was highlighted by a pair of one-hour B.R.M. Chronographes Enduros and a full-slate of second-round WeatherTech Sprint races, all of which were run in damp or full-on rainy conditions. Despite the anticipated inclement weather, a large contingent of HSR competitors and even heartier race fans were on hand Sunday at Road Atlanta for the third and final official day of racing at the 40th Classic Motorsports Mitty.
The B.R.M. GT Classic Enduro, as well as the Group 5 WeatherTech Sprint, were won by Todd Treffert in his 1974 No. 141 Porsche 911 IROC. The two victories gave Treffert and his SpeedConcepts team an event-high four wins on the weekend.
In addition to Sunday's victories, Treffert also topped a 54-car field to win Saturday's pre-1975 Classic Porsche Feature race. He also took International class honours in Friday's Bob Woodman Tire International/American Challenge race. Treffert shared the B.R.M. Enduro podium with runner-up Yves Scemama in his Heritage Motorsports 1974 No. 52 Porsche 911. Angus Rogers was third in his 1973 No. 15 Porsche 911 RSR prepared by KMW Motorsports.
The B.R.M. Vintage Enduro kicked-off Sunday's schedule with an 8 a.m. EDT green flag and was won by Joey Sullivan in a 1989 No. 14 Porsche 944/S2. Sullivan, who stood on the top-step of the podium with his father and car owner Joe Sullivan, got the most out of his rain tires and took advantage of a well-timed yellow-flag period during his pit stop to get the edge on the field.
Danny Burnstein and Kevin Wheeler co-drove to a second-place finish behind Sullivan in the KMW Motorsports 1970 No. 76 Porsche 914/6. Mayo Smith was third in his 1972 No. 10 Porsche 911 ST prepared by the 901 Shop.
The B.R.M. Enduro podium showing wasn't Smith's only visit to victory lane on Sunday. In the afternoon he drove his No. 10 Porsche to an overall and Group 3 victory in a combined WeatherTech Sprint with Group 2.
Group 2 honours in the same race went to Quinn Derby in his open-top 1968 No. 141 Triumph Spitfire, taking a solid third-place overall result in the process.
Additional WeatherTech Sprint Run Group winners on Sunday included Jacek Mucha in his 2006 No. 07 Swift JMS-016P (Group 4), the 2010 No. 88 Chevy Camaro GT.R of Henri Sicotte and GT Racing (Group 9) and Don Ondrejcak in his ex-TRG 2007 No. 65 Porsche 997 GT3 Cup car (Group 10).
John Orzechowski proved stock cars can run competitively in the rain with a WeatherTech Sprint Group 8 win in his 1997 No. 11 Ford Thunderbird.
The final checkered flag of the weekend went to 21-year-old Bailey Monette who took WeatherTech Sprint Group 11 honors in his No. 25 2005 Stohr.
Next up for HSR is the VIR Historic Races weekend at VIRginia International Raceway, June 2nd - 4th, 2017.