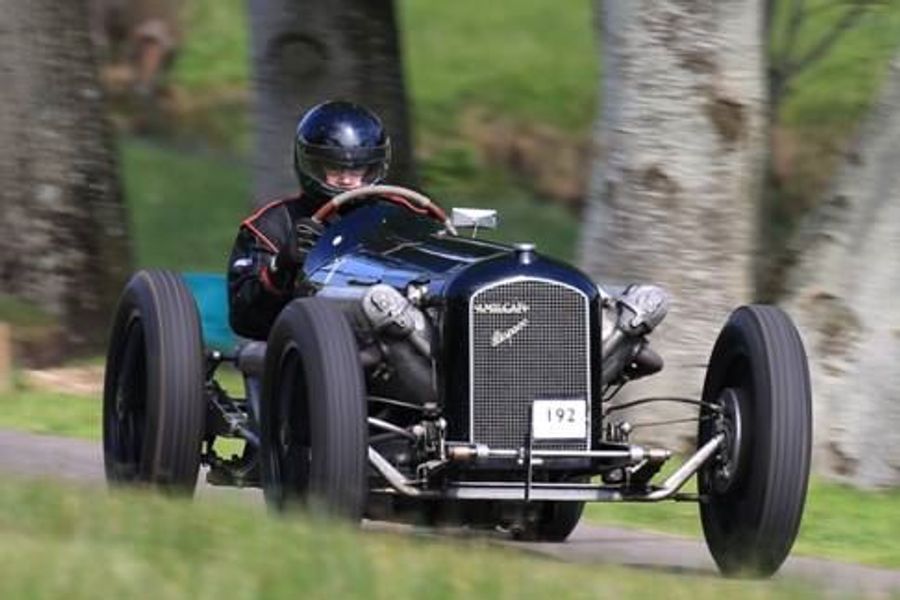 Following victory at the opening round of the VSCC’s inaugural Speed Championship at Curborough, Tom Walker continued his scintillating start to the season with another ‘Fastest Time of Day’ accolade at the club’s Wiscombe Park Hill Climb on Sunday 8th of May.
Embarking on only his second full season with the ex-Robin Baker Amilcar Special – boasting a monstrous 12-litre Hispano Aero-engine – the Lutterworth-based racer once again showed the form that has brought not only victory at the Curborough Speed Trials, but also success on the race circuit, with an impressive Vintage Race win at Silverstone ‘Spring Start’ last month.
As in previous weeks, Walker held off a strong challenge from Tony Lees in the AC/GN ‘Cognac’ Special, with the winning run of 47.41 seconds less than two tenths of a second quicker than his fellow Leicestershire competitor. Lees in turn was a mere 0.03 seconds ahead of Nick Topliss, who gave an accomplished performance on his Hill Climb debut in the revered ERA R4D, now under the stewardship of Brian Fidler.
There were also strong showings from perennial challengers Rob Cobden and Julian Grimwade, both less than a second off the leader in the Riley Falcon and Frazer Nash Norris Special respectively, whilst Gary Clare took his Shelsley Walsh Special ‘Grannie’ to class victory, with Richard Ashford the pick of the Post-war class in the 1948 Cooper T9.
Having lost out to Greg Lerigo’s Riley Special at Curborough, David Pryke reaffirmed his status as top Sports-Car in his Morgan/Riley, with the former hot on his heels, whilst there were also class wins for the Austin 7s of Freddie Smith and Jeremy Flann, Mark Groves in his Frazer Nash TT Rep Emeryson and the Alvis Silver Eagle of Mac Hulbert. Lea-Francis, Railton and Bentley marques also tasted success.
Ever the draw for spectators, the small but quality quartet of Pre-1918 Edwardian cars also entertained, with club director Geoff Smith delivering an expected victory in his stunning Piccard-Pictet Sturtevant Aero Special, with past president Roger Collings collecting a Handicap award in the 1912 Zust Brixia.
The next round of the 2016 VSCC Speed Championship will be the Harewood Hill Climb on Saturday 4 June, hosted as tradition by the BARC Yorkshire Centre. The club’s next event is the Hawthorn Memorial Trophies Race Meeting, taking place at Oulton Park on Saturday 21 May, also featuring additional AutoSolo and Concours events.
Tom Walker Speed Championship Curborough Wiscombe Park Hill Climb VSCC