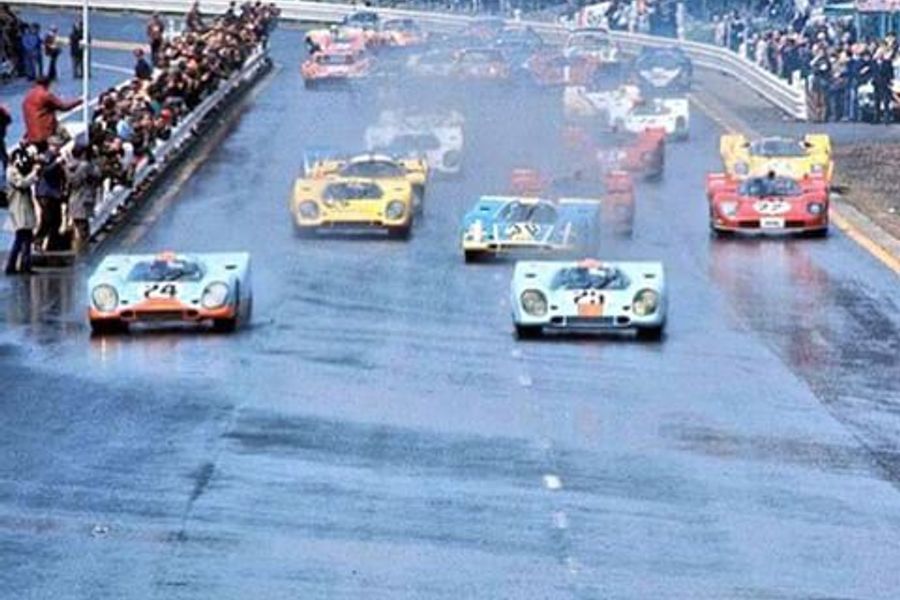 Click on the Video tab for period race action!
The 1970 1000km of Spa was the first time the new breed of prototypes had competed at the Belgian circuit, and the race set a new record for the highest average speed on a road circuit. The JWA team, having negotiated a deal to run the ‘official’ Porsche entries, a deal that turned out not to be a exclusive as they first thought, took the win with the 917K of Brian Redman and Jo Siffert, with Ferrari second.
The original 8.7-mile layout of the circuit only featured one slow corner, the La Source hairpin, and from then on was a series of flat or almost flat corners. The Grand Prix circus had not visited in 1969 due to concerns over the speed of the circuit, but the fitting of Armco barriers had brought the major series back – the sportscars first and setting the record pace.
In qualifying the Ferrari 512s were suffering handling issues, John Surtees, back with Ferrari after pressure from Shell for three races, feeling that their straight-line speed was slowed by the flaps fitted to the rear to cure the handling imbalance. Porsche too had problems, the 917s hard on tyres, but Pedro Rodriguez put that to one side to record a blistering 157mph lap to take pole.
The race started on a drying track, Siffert, Rodriguez and Ferrari’s Jacky Ickx opting for the ‘intermediate’ style tyre, and the run down to Eau Rouge on the opening lap saw the two Gulf-liveried JWA 917s side-by-side into the corner, Siffert emerging ahead. The rivalry between the two rapid Porsche drivers to be perceived the quicker was a feature in other races that year – at season’s end when Siffert was asked how they got on he replied: ‘every time we get on the track the little bastard tries to kill me’.
Siffert briefly lost the lead, being passed by Rodriguez and Ickx as they reached back-markers after just a few laps, but swiftly regained it, Rodriguez losing time with a puncture. The lead cars pitted around the hour mark and a better stop for Ferrari (not often that happened in sportscar racing!) saw Ickx emerging ahead, a lead he was to keep until the second round of stops when he handed the 512S over to Surtees, Siffert jumping out for Redman to take over the lead JWA Porsche.
The Porsche was better in the traffic as they lapped, Redman closing in and going ahead, while Leo Kinnunen, who had taken over from Rodrigues, was out with a broken gearbox input shaft. In the final stints Ickx started to close back in on Siffert, but a warning from the pits saw the Swiss racer up his pace to take the win – his first of the year for the team
Spa in 1970 was a classic race in a classic period of sportscar racing. The mighty 917s and 512s only raced properly head-to-head for two seasons before rule changes saw them sidelined, but in that period they matched and even surpassed Formula One for spectacle and speed. Less than a month later at the Belgian Grand Prix Chris Amon’s fastest lap was almost 11-seconds slower than Rodriguez's best race time, and although the average race speed was a fraction higher for the single seaters, they had not been making pit stops…
1000km de Spa-Francorchamps
17th May 1970
Results:
1 Jo Siffert/Brian Redman (Porsche 917K) 71 laps in 4h09m47.8s (149.409mph)
2 Jacky Ickx/John Surtees (Ferrari 512S) 71 laps in 4h12m23.3s
3 Vic Elford/Kurt Ahrens Jnr (Porsche 917K) 70 laps
4 Ignazio Giunti/Nino Vaccarella (Ferrari 512S) 68 laps
5 Gijs van Lennep/Hans Laine (Porsche 917K) 68 laps
6 Richard Attwood/Hans Herrmann (Porsche 917K) 68 Laps.
Pole Position:
Pedro Rodriguez (Porsche 917K) 3m19.8s
Fastest Lap:
Rodriguez, 3m16.5s (160.5mph)
1970 Video Porsche 917 Spa Porsche 917 Siffert 917K Redman

Video: The Porsche 962 Seminar from The Amelia