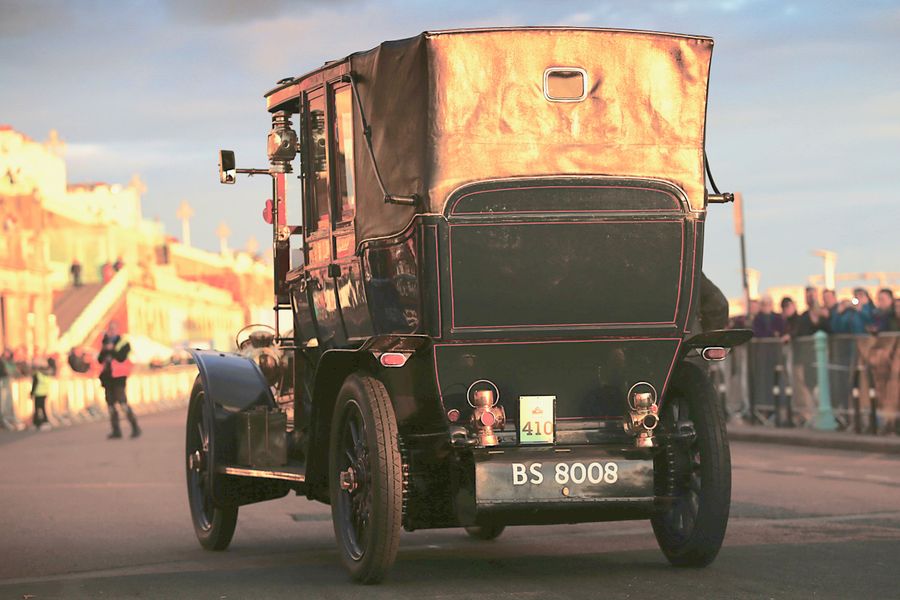 One of the most curious names jumping on the bandwagon back then was the Societé Manufacturie d’Armes – a French armament company from St Etienne which could trace its history right back to 1553.

Originally a supplier of guns to the Royal Ordnance, it was later noted for its sewing machines and then hugely-popular and still new-fangled bicycles. Records show the Societé Manufacturie d’Armes first exhibited a motor car at the Paris Salon as early as 1898. However, production ceased in 1907 and only one example – a regular on the annual Run from capital to coast – still exists today.

Affectionately referred to as ‘the Society’, this magnificent 1904 chain-driven, six-seater landaulette is one of the most comfortable and unfussed performers down the A23 and, unsurprisingly, boasts an excellent London to Brighton track record. It is propelled by a powerful 4,850cc Aster engine with four individually cast cylinders, side-valves and a T-head, all driving through a four-speed gearbox.

Marvelling at the imposing car’s exquisite coachwork, luxurious upholstery and impressive period brass fittings, it is hard to imagine ‘The Society’ in less resplendent condition… but 40 years ago that was very much the case. In the late 1970s it was found languishing in Sardinia, the ravages of time having destroyed much of its original splendour.

A full restoration was meticulously carried out by noted veteran car restorer Mark Tidy with the story fully documented in the October 1986 issue of The Automobile magazine. Since then the unique, elegant and powerful motor car has been a regular on the Run, its lavish fold-down landaulette compartment providing ideal all-weather motoring.

Whatever the meteorological conditions, the curiously named Societé Manufacturie d’Armes will be back en route to Madeira Drive come the first Sunday in November, once again intriguing all the spectators lining the route with its enthralling history.