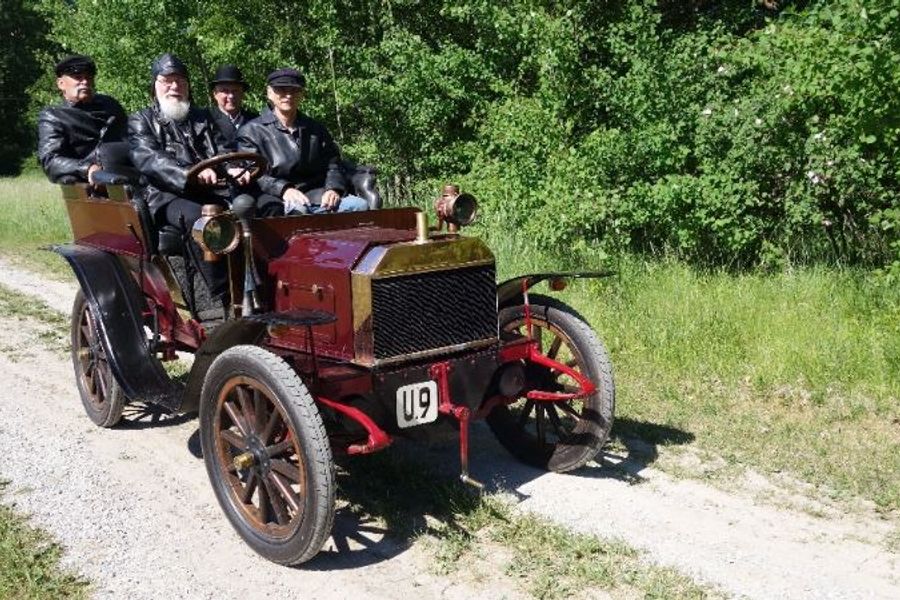 An exciting and highly significant marque will make its debut on this year’s Bonhams London to Brighton Veteran Car Run supported by Hiscox (Sunday 4th November).

Featuring only pioneering vehicles dating back to the dawn of motoring, the famous Veteran Car Run – a Royal Automobile Club event –  always showcases many bygone motor manufacturers alongside embryonic automotive companies such as Cadillac, Peugeot, Renault and Vauxhall that are still going strong today. Among more than 100 trail-blazing marques participating on last year’s 121st staging of the world’s longest-running motoring spectacle were numerous now-departed makes – Napier, Mors, Clement, Lanchester, Pierce, Rambler and Star among a host of others – but never before has a Vabis appeared on the entry list.

In fact, the rare and unique debutant dating back to 1903 was not even originally called a VABIS as this snappier abbreviation was introduced later as the full company name – Vagnfabriks-Aktiebolaget i Södertelge (hence VABIS) – understandably was deemed to be far too long to be practical. Hence there is no badge proudly adorning the radiator of this ground-breaker as there was on later models from the same manufacturer.

Founded in the industrial city of Södertälje and owned by Surahammars Bruk AB, the Vabis company was established in 1891 originally to build railway carriages. It quickly branched out, however, into other emerging markets including both trucks,arine engines and cars before merging with Maskinfabriks-aktiebolaget Scania in 1911 to form Scania-Vabis, today well-known right around the globe as Scania AB.

As well as being a pivotal building block in Scania’s history, the significance of this particular Vabis should not be under estimated. It is the fourth made and currently earliest working vehicle designed by Gustaf Eriksson, the genius widely regarded as the ‘Father of the Swedish Automobile Industry’.

Eriksson’s first creation is on static display in Stockholm’s Science Museum and his second and third machines have been lost for more than a century. As a result, this remarkable curiosity with its four-seater Labourdette crafted tonneau-style body is the oldest Swedish designed and manufactured combustion-engined car still in running order.

Like so many of the gems taking part on the annual Veteran Car Run, the one-off Vabis has a colourful and eventful history and many stories to tell. Powered by a twin-cylinder, 2.7-litre engine producing around 10 horsepower, the model was first displayed at a Paris motor show in 1903. A year later – and back in Sweden – it competed in a race against several imported rivals thus making it Sweden’s oldest racing car in existence.

In 1906, the car also gained royal provenance when photographed with Crown Prince Gustav sitting in the passenger seat in the year running up to his coronation. Thereafter, the historic Vabis remained in use until 1913 when it was placed first in storage and then on display in a small regional museum until 1989, when ownership was transferred to the Community of Surahammar, which still preserves the vehicle today.

More importantly, under its caring tenure, the truly historic machine has undergone a major restoration with participation in the Veteran Car Run as the ultimate goal.

“We are really looking forward to coming to London… and hopefully to Brighton, too,” wished Bo Söderberg, one of around 20 enthusiasts from Aros Motorveteraner (AMV) in Västerås supporting the Vabis on its latest adventure as it travels on the hallowed route from Hyde Park to the Sussex resort.

“As you can imagine, there has been lots of interest in the car and taking part in the famous Veteran Car Run is a reward for all the hard work we have invested into the project over the past three to four years. I’m pleased to report that the car is currently running well, though we are spending the summer testing its reliability in readiness for November,” added Söderberg who will be sharing the driving duties with four or five others in the AMV restoration team.

“It is always wonderful to see a new marque on the entry list – even more so when it is one that boasts such an incredible heritage,” enthused Ben Cussons, Chairman of the Veteran Car Run Steering Group. “We congratulate Bo together with all the others involved in bringing such an historically important rarity back to life; they deserve huge praise and we wish them every success in their mission to complete this year’s Veteran Car Run. The presence of a super-rare Vabis adds yet more interest and intrigue to what’s already one of the world’s most magical motoring events.”