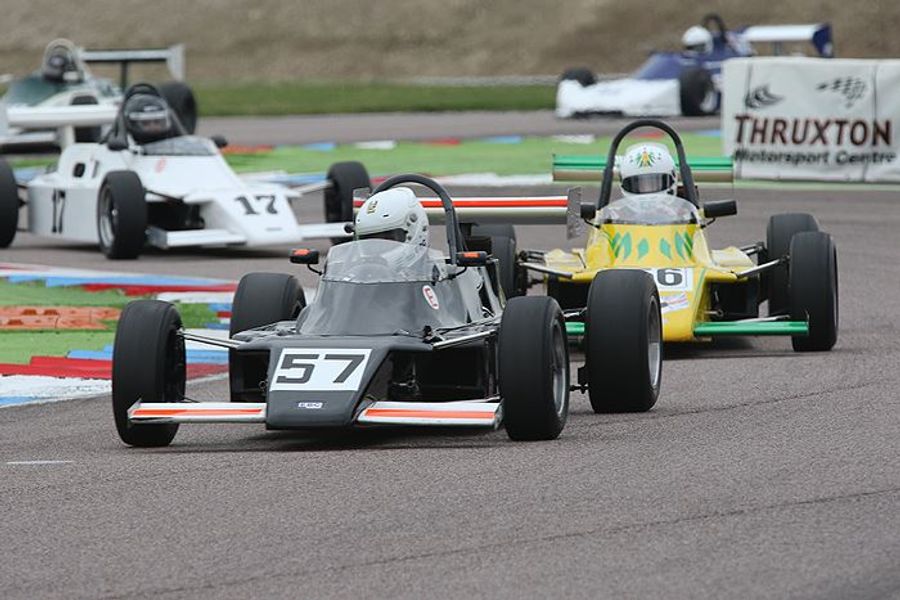 The Historic Sports Car Club will provide three grids for the 50th Anniversary Meeting at Thruxton over the weekend of 2nd/3rd June. Double-header races for the Historic Formula Ford Championship along with a 40-minute race for the Guards Trophy and a double-header non-championship ‘Spirit of Thruxton’ race for up to 2-litre single-seaters will give the weekend a strong flavour of the HSCC.

A bumper grid of Formula Ford 1600s will deliver typical Thruxton slip-streaming action in the third event of their season. No category has delivered better racing this season than Historic Formula Ford and this should be a pair of epic races. Richard Tarling, Cameron Jackson, Callum Grant and Ben Mitchell are the current top names while joining the grid for the weekend is Thruxton legend Tiff Needell in his Lotus 69.

At 40-minutes, the Guards Trophy race will be the weekend’s longest race with mandatory pit-stops and optional driver changes. A fine grid of pre ‘66 GT cars and pre ‘69 sports-racing cars will make a tremendous sight around Thruxton’s fast sweeps and in the 50th year of both the Chevron B8 and the Ginetta G16, five Chevrons will take on the lone Ginetta of father and son Graeme and James Dodd.

In the GT ranks, for what will be the third Guards Trophy race of the season, the TVR Griffiths of John Spiers, Peter Thompson and Peter Dod/Nathan Dod head the entry along with John Davison’s very rapid Lotus Elan 26R.

Completing the HSCC grids will be a non-championship race for up to 2-litre single seaters of the 1970s and early 1980s from the HSCC’s Historic Formula 2, Classic Formula 3 and Historic Formula Ford 2000 championships. A varied grid of slicks and wings single-seaters will honour Thruxton’s rich Formula 2 heritage and the BARC will present its Jochen Rindt Trophy to the leading driver in a Formula 2 car.

Steve Worrad’s F2 Chevron B49 should set the pace but look for the ex-Niki Lauda March 722 of Stephen Weller, which is returning to Thruxton for probably the first time since Lauda finished third in the European Formula 2 race on Easter Monday 1972. Meanwhile, Scott Blakeney, son of circuit manager Pat, has his first race in dad’s FF2000 Delta T81. With a strong pedigree in Formula Ford 1600, Scott has not raced for several seasons.