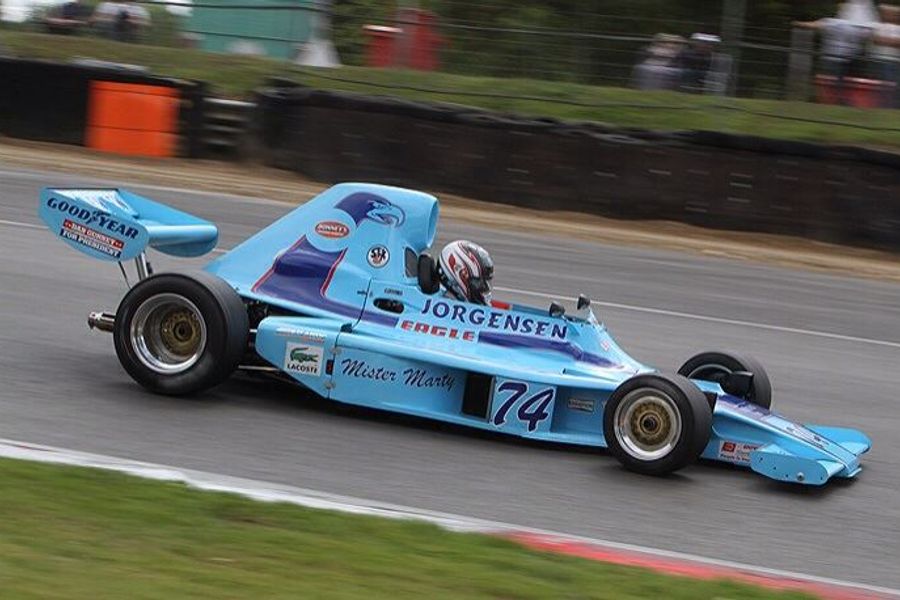 A total of 250 entries for a 17-race programme will get the 2015 season from the Historic Sports Car Club underway in style at the third Thruxton Easter Revival (Saturday/Sunday 4/5 April).

Once again the annual HSCC visit to the Hampshire track has attracted one of the biggest entries in the circuit’s 47-year history and the race programme takes in historic single-seaters, sports, GT and touring cars.

Up to seven of the thundering Formula 5000s will grace the Derek Bell Trophy grid, topped by the Gurney Eagle FA74 of Michael Lyons. However, Neil Glover will be chasing hard in the ex-Peter Gethin Chevron B37 as the Chevron marque reaches its 50th anniversary season. Ian Ashley was an F5000 race winner 40 years ago and is back in the category in a Lola T300, while Italian racer Stefano Rosina will make his class debut in a rare Leda LT25. Ranged against the 5000s will be the best of the 1600cc and 2-litre cars, headed by the Formula Atlantic March 79B of Richard Evans.

The HSCC Historic Formula Ford Championship is one of the club’s most successful categories and back for a rare Historic FF1600 outing is former race winner Ben Mitchell in the family Merlyn Mk20. He’ll go up against the similar car of Max Bartell, Simon Toyne (Lola T200), Finnish commuter Pertti Kiiveri (Kvantti) and Will Nuthall (Jamun T2) as well as local ace Tiff Needell in his Lotus 69.

Defending Historic Formula Ford 2000 champion Benn Simms is the category yardstick in his Reynard SF77. However, the prolific race winner from Leicestershire has lots of rivals to contend with including young charger Callum Grant (Delta T78).

The Silverline Historic Formula Junior Championship kicks off with a single race on Sunday. Both front- and rear-engined cars will be on the grid where father and son Michael and Andrew Hibberd should be to the fore along with Westie Mitchell in his ex-Clay Regazzoni De Tomaso and Peter Morton in his Lightning Envoyette.

An excellent 26-car field will arrive for the opening double header for the HSCC/HRCR ByBox Historic Touring Car Championship and proudly carrying number 1 on the side of his Lotus Cortina, as reigning champion, is Welshman Tim Davies.

The HSCC’s Guards Trophy is for pre ’66 sports-racing and GT cars and pre ’69 sports-racing cars with two 40-minute races. The fast sweeps of Thruxton tend to favour all-out grunt and the GT grid is not short on horsepower. Four TVR Griffiths, two Jaguar E-types, an AC Cobra and a Sunbeam Tiger will make quite a spectacle on the rush up Woodham Hill into the chicane.

In the sports-racing element of the Guards Trophy, running on Sunday, it is the timeless classic Chevron B8 that should set the pace. The combination of Sandy Watson and Martin O’Connell will surely be the standard, though James Schryver will be close as will the Lenhams of Brian Casey and father and son pairing Stuart and George Tizzard.

One of the enduringly popular HSCC championships is the ONI PLC-backed Historic Road Sports Championship for production sports cars built before the end of the 1960s. The Morgan Plus 8s of Robin Pearce, Richard Plant and Kevin Kivlochan should set the pace. Meanwhile, Peter Shaw will start the defence of the 70s Road Sports title in his TVR Tuscan.

In the 50th anniversary season of the Clubmans formula, the programme includes the opening round of the HSCC Classic Clubmans Championship for the amazing front-engined sports-racing cars built up to 1980. Reigning champion Mark Charteris will set the measure in his Mallock Mk20/21.