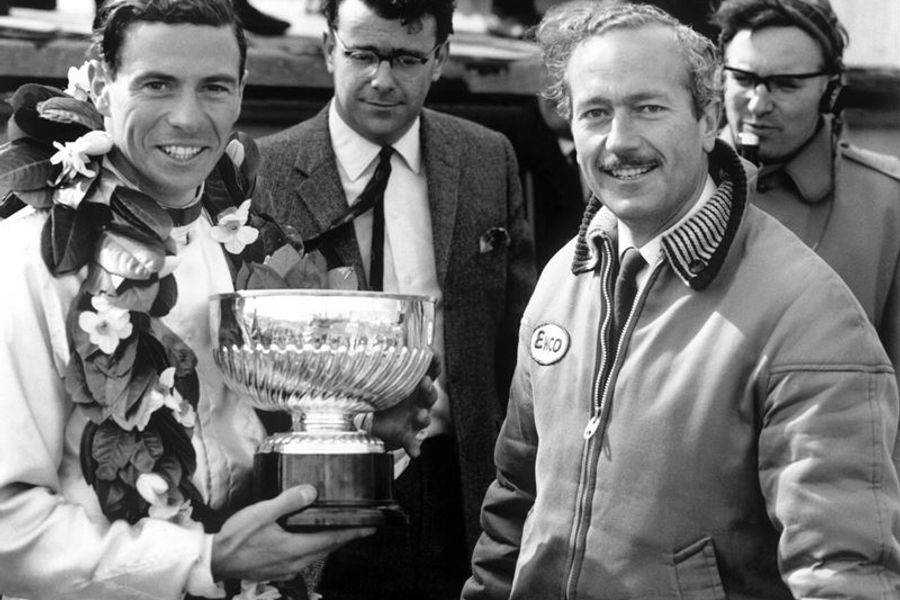 A the anniversaty of JIm Clark's death comes round again, few can tell the story of that sad day better than Grahame White:

April 7th 2018 marked the 50th anniversary of the death of double Formula One World Champion Jim Clark at Hockenheim in Germany. In the UK the HSCC marked the anniversary with a tribute to the great Scots driver featuring a selection of cars associated with him on the grid at their Donington Park meeting, followed by a minute’s silence perfectly respected by the crowd on the track.

Afterwards, we took the opportunity to talk with HSCC CEO Grahame White, who was a friend of Clark’s and actually at Hockenheim on that fateful day, and asked for his memories of that time:

“People say that he was killed in an unimportant Formula Two race, but if you look at the entry list for that meeting there were a lot of drivers who went to do big things, any race with Graham Hill and Jim Clark on the entry list isn’t bad is it?

“Motor racing was very different in these days because there wasn’t the pressure there is these days. If you remember, Jim Clark would be able to drive a Formula One Lotus in a Grand Prix, and on the same day have a race in a Lotus Cortina, or perhaps a Lotus 30 or 40, he just loved racing and was allowed to do that. Now Grand Prix drivers aren’t allowed to race in anything else because of the risks involved and the contracts, and the money involved.

“Back then all the drivers were mates, they used to socialize and sometimes travel to the circuits together. It was very different, and I was very privileged to be part of that back then.

“They all had great respect for one other on the track, of course they did because they had already made arrangements to socialise together after the race. If they weren’t skiing, they would be water-skiing or partying or flying somewhere together, they were much closer than drivers are today.

“Jim was thought by everyone to be the best. I remember talking to Denny Hulme, who went on to become world champion, and he said that Jim Clark was the only Grand Prix driver that the other drivers accepted was better than them. That is quite something, you would never get a current Grand Prix driver saying that, but Jimmy was so good, and they all knew he was that good. He was highly respected too, not only was he good in a car he was such a nice person too.

“He had all the ingredients to be the perfect motor racing hero. He was the big landowner in Scotland, the farmer, he loved driving his tractor and tending the sheep one day and would be winning a Grand Prix the next. It was just extraordinary, he would have thousands of people clamouring to talk to him or take a photograph with him, and then he could be out in the fields and just as happy.  It as a privilege to have met him.

“I was running the BARC at the time, we organised all the races at Goodwood, and the Easter Monday meeting was a big event there. I was also responsible – in theory – for running all the Formula Two races, and I was a steward at the non-UK Formula Two meetings. I got know Jimmy quite well, and he also had a flat in London not far from the BARC office so we would socialise a little bit.

“I was at Hockenheim because I was asked to go by the RAC. They needed a steward there from the UK, and I was asked to attend, which is why I was so involved in the accident, the aftermath and all that went with it.

“Hockenheim then was along circuit with a big loop through the woods. The place where the accident happened was just a long flat-out right-hand curve, there weren’t any chicanes or anything, so there wasn’t a place that anyone crashed. It was lined with trees either side, no Armco barriers of course, and it was very unusual for anything to happen there – and an uninteresting pace for a marshall to be as all they saw was the cars flashing past at maybe 140mph.

“It didn’t really need anyone there, other than to wave the odd flag maybe, not like today when you have teams on every corner.

“When it happened there was total disbelief. Up until them Jimmy had never even drawn blood in a racing accident. He had big accidents or incidents, which was inevitable if you think of all the races he did, but I think everyone considered him the best, with no question of doubt. Everybody, without fail, knew that he was the best, and I think nobody expected him to ever get hurt in a racing car, let alone anything worse, and when he lost his life people thought ‘if it can happen to him, it can happen to anybody’, as they knew his car control was the best and they knew he didn’t make mistakes like anyone else.

“It was something that broke on the car, no question, and he can’t have had any option or way to control it.

“He went into the trees. I went to the scene of the accident, saw the car was completely wrecked, and he wouldn’t have known anything about it fortunately. I then had the unenviable task, being a steward, of telling his team mate, who happened to be Graham Hill, what had happened. Graham was quite a forceful character, I knew him well and played golf with him often, and he would not believe me – he said, ‘I don’t believe what you are telling you me, are talking about Jim Clark and that is impossible’.

“He said he wanted me to go back to race control and confirm what I was telling him as he just didn’t believe it could happen. I knew that what I had told him was right, but it started to put doubt even into my mind!

“I came back and we sat in the front of the Lotus transporter and he was – like we all were – just numb. We were all wrapped in our own thoughts, we had no idea what to say, what to do, where to go. It was the most extraordinary feeling I have ever had.

“But racing went on – even the second Formula Two race at Hockenheim was run, which was a bit of a surprise, but I think that the organisers didn’t want to announce what had happened, maybe the drivers wouldn’t have raced and maybe the crowd would have all left.

“I was then Clerk of the Course at Thruxton the following weekend – where of course we had a Formula Two race. That was just six or seven days later, the Lotus cars were withdrawn but everybody else raced and it was the first big meeting at Thruxton. Racing carried on.”