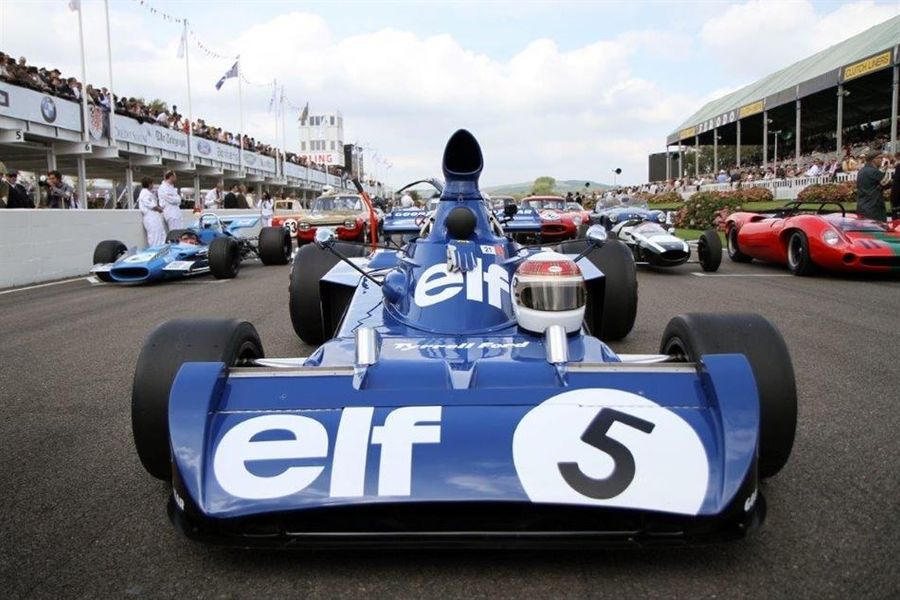 Sir Jackie Stewart was honoured today as the Goodwood Revival paid tribute to the three-time Formula 1 World Champion. The stature of the motorsport luminaries, such as Sir Stirling Moss and John Surtees, present as 24 cars from Sir Jackie’s career lined up on the grid, was testament to the regard in which he is held not only for his track success but his campaigning work on racing safety.  Lord March recalled how his grandfather, Freddie, ninth Duke of Richmond, had pointed out a young Jackie Stewart to him as a future world champion.
Sir Jackie himself led the parade away in Tyrrell 006, the Cosworth Ford-engined car in which he secured his 1973 title. Surtees gave chase in an ex-Team Surtees Lola T70 similar that which Sir Jackie had driven for him in 1965. The variety of machinery that followed them indicated the Scot’s versatility and the way in which grand prix drivers of the 1960s and 1970s would compete in more than one race at an international event.
Notable was the Cooper-BMC Formula 3 machine in which Sir Jackie first proved himself during a test session at Goodwood in 1964, driven in the parade by his son Mark. Goodwood was a significant circuit during Stewart’s early career for he was to become joint-lap record holder with his fellow great Scot, Jim Clark in 1965.
Grand Prix winner Mark Webber was among the other drivers, piloting the Matra-Cosworth MS80 in which Sir Jackie had won his first F1 title in 1969. Richard Attwood, Le Mans winner in 1970, was at the wheel of a BRM similar to that with which Sir Jackie took his first F1 win, while out on track was also the Lola-Ford with which he led the Indy 500 as a ‘rookie’. Ken Tyrrell, who was so significant in Sir Jackie Stewart’s career, was also remembered as Adam Tyrrell drove the first of his grandfather’s Formula One creations.
Sir Jackie Stewart said: “The Goodwood Revival’ is one of the great events of the year and it’s a great honour to have this kind of celebration put together by Lord March. It was at Goodwood where I first drove a single-seater 50 years ago, and it changed my career.”