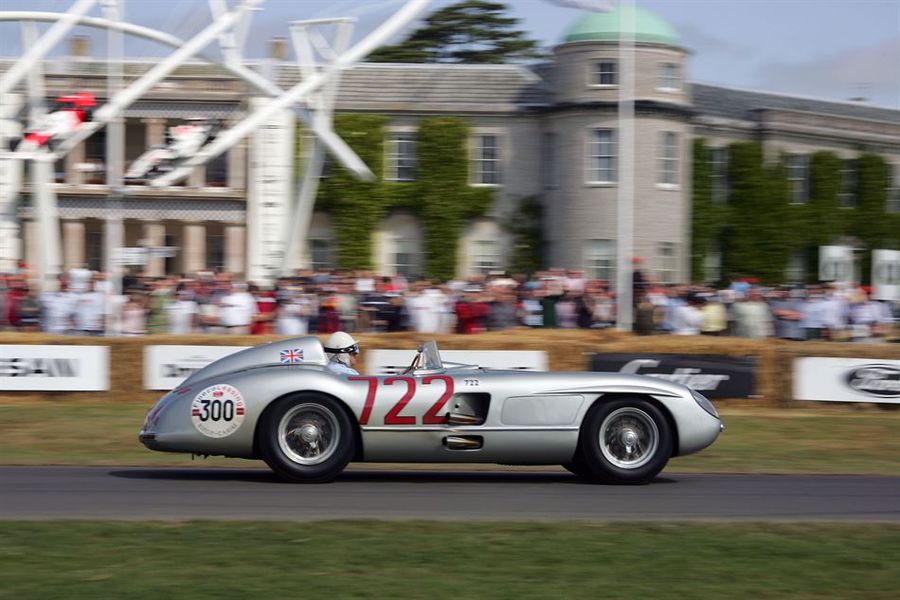 Details have been announced today of the 2015 Festival of Speed, held on June 25th to the 28th, which will have the core theme of  Flat-Out and Fearless: Racing on the Edge, paying tribute to the drivers and constructors throughout history that threw caution to the wind in pursuit of victory. Once gain Gerry Judah will design the dramatic central feature outside Goodwood House, which this year will honour Mazda’s contribution to motoring and motor sport in the year in which the all-new version of the world’s best-selling sportscar, the MX-5, will be launched.

Historic highlights of the event are set to include:

-    60th anniversary of Sir Stirling Moss’s 1955 Mille Miglia win sharing a Mercedes-Benz 300 SLR with journalist Dennis Jenkinson will be commemorated with a gathering of 300 SLRs, including chassis 0004/55, the car Sir Stirling used on that epic Italian event. Eight 300 SLRs currently exist, and seven of them will be at Goodwood.

-    40th anniversary of Derek Bell’s first Le Mans win driving a Gulf Mirage GR8 with Jacky Ickx. The Festival of Speed will feature a line-up of cars from the career of the five-times Le Mans winner and twice World Sportscar champion, including a Porsche 917, a 1980s 962C, and a Ferrari 246 Dino used by Bell in the 1969 Tasman series.

“Goodwood means an awful lot to me,” said Bell, who made his race debut at the circuit in 1964, “so for Lord March to celebrate my first Le Mans win in 1975 with the Gulf Mirage, having done a heck of a lot of the testing here, is very special. When I was younger, all I wanted to do was race at Goodwood. I’d be on the farm pitching the hay and I’d hear the Formula 1 BRMs testing with guys like Juan Manuel Fangio and Ken Wharton behind the wheel. I never dreamed I’d go on to race other places and achieve so much success. And it all started here at Goodwood.”

-    The mighty FIAT S76 from 1911 will have its first public run in 100 years as the 28-lire ‘Beast of Turin’ takes on the Goodwood hill. On static display at Goodwood last year, the full results of a 10-year restoration will be on show as the four-cylinder monster – officially recorded at 135mph in a speed record attempt in 1911 – roars into life.

“After restoring a Bugatti T35,” said restorer Duncan Pittaway, “I was looking for a new challenge and the S76, which is one of the more maligned cars of its generation, fitted the bill nicely. All of the original S76 components that have survived have been restored, from the chassis and engine down to the suspension, axles, pedals, steering box, etc, with the gearbox, radiator and bodywork being created using the original Fiat drawings. As the last and largest of the huge-engined Edwardian monsters, it should be sensational for the Festival of Speed visitors to see – and hear – it heading up the Hillclimb.”

-    Richard Petty will again be at the Festival with his Plymouth Superbird NASCAR racer from 1971, the 19ft long racer with its distinctive nose cone and soaring rear wing always a crowd pleaser and a magnet for face of the movie ‘Cars’ where the character ‘The King’ was a Superbird in Petty’s distinctive blue livery and voiced by King Richard himself.

In addition to the historic elements, there are a host of more modern racecars on show with five Formula One teams promising machinery, while on two wheels seven times MotoGP champion Valentino Rossi makes his Goodwood debut.