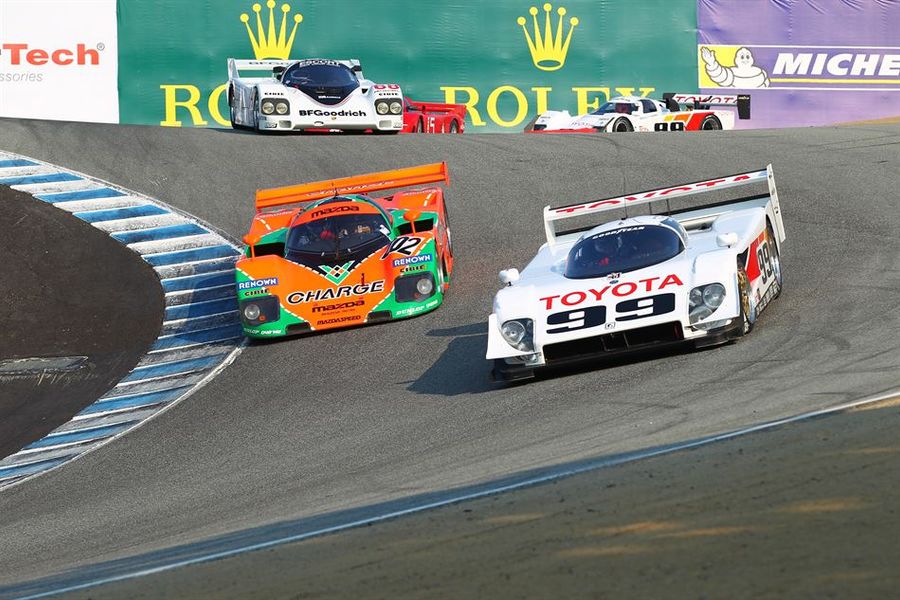 Race car drivers of every era enjoy time on challenging race circuits. And for some, the Rolex Monterey Motorsports Reunion provides the special opportunity of not only racing time, but the thrill of doing so in a historic race car. The annual event, which this year celebrates the racing achievements of Nissan and Datsun, attracts more than 550 historic and period-correct race cars August 23-26 to Monterey County’s iconic WeatherTech Raceway Laguna Seca located on the scenic Peninsula.

“Each year, dozens of legendary drivers are seen in the paddock admiring the diversity of cars entered, greeting guests and conducting autograph sessions or are behind the wheel to enjoy the racing action,” comments Timothy McGrane, CEO of WeatherTech Raceway Laguna Seca. “One race group in particular features an interesting cast of current or former professional drivers that will appeal to fans.”

Group 7B’s 1981-1991 IMSA GTO, GTP, Trans-Am races on Thursday, Friday and Sunday is going to be a stirring shootout of skilled drivers and incredible prototype machines from the likes of Porsche, Nissan, Datsun, Mazda, Toyota, Chevrolet, Ford and more. It also includes eight former and current professional drivers in the competitive group.

Among the notable 44 entrants in Group 7B are:

Steve Millen is reunited with his 1990 Nissan 300ZX that captured first overall win at the Sebring 12 Hours with co-drivers Johnny O’Connell and John Morton, and the GTS class win at the 1994 24 Hours of Le Mans.

Gunnar Jeanette, who debuted at the 2000 American Le Mans Series and captured the ALMS LMPC Driver Championship the following year, as well as competing in eight 24 Hours of Le Mans races, will be driving the 1988 Porsche 962C. This car captured third place at the Daytona 24 Hours in 1990 driven by Bob Wollek, Sarel van der Merwe and Dominic Dobson.

Zak Brown, who competed in the American Le Mans Series, Indy Lights and British GT Championship, will compete in the 1988 Porsche 935, which is the 1982 IMSA Camel GT Championship winning car, as well as winning at Daytona and Sebring.

Bruce Canepa, who in his first year in IMSA captured three podiums including third overall at the 1979 24 Hours of Daytona and co-drove the first March GTP car with Bobby Rahal, returns with the 1989 Porsche 962C that has extensive race history at Silverstone, 24 Hours of Le Mans, 1000Km of Fuji, and Autopolis in Japan.

Charles Nearburg, who competed in Formula Atlantic, Indy Car, raced at 24 Hours of Le Mans and set the wheel-driven land speed record of 414.4 mph in 2010 at the Bonneville Salt Flats, will be driving the phenomenal AAR Toyota Eagle Mk III that won 21 of 27 races during the 1991-1993 IMSA Camel GT seasons.

Tom Long, who began racing in the Grand-Am Series has raced prototypes with Mazda in the IMSA series, will be driving the 1990 Mazda 787 that was originally driven by Bertrand Gachot, Johnny Herbert and Volker Weidler at the 1990 24 Hours of Le Mans.

Jonathan Bomarito, who is a native Monterey resident and races in the IMSA series for Mazda, is in the 1989 Mazda 767B. This car debuted at 1988 24 Hours of Le Mans with a 19th place finish and later scoring a GTP class win at Fuji. It was converted to 767B specification and the now legendary Charge livery the following season. Its best result was a class win at Suzuka, while also finishing 9th at Le Mans.

Tristan Nunez, who has raced since 2011 and is now with Mazda in IMSA, is piloting the 1992 Mazda RX-792P that was driven throughout the 1992 IMSA GTP Championship season by Price Cobb, with a best finish of second at Watkins Glen.

Joel Miller, who is currently racing the Oreca LMP2 in the IMSA series, is piloting the 1990 Mazda RX-7 that was used for two seasons by Pete Halsmer. It was raced to six wins and scored the RX-7's 100th victory.

While Group 7B is the most populated with professional drivers, there are several significant drivers throughout the 15 race groups.

Doing triple duty is champion John Morton, who is widely known as one of the most prominent drivers from the Datsun BRE championship-winning years. The energetic Morton will be driving the 1970 Datsun 240Z in its legendary BRE livery in Group 5A, a 1973 March 73A in Group 8A and, if that’s not enough, will race a 1964 Sunbeam Tiger in Group 6B.

Not to be outdone is the always engaging and energetic Lyn St. James, who will be turning back the clock on her stellar racing career by driving a mighty 1931 Bugatti Type 51 in Group 1A. This particular car won the 1932 Algerian Grand Prix, and raced in the Casablanca Dieppe Grand Prix, Pau Grand Prix, and in 1934 participated in the Picardy Grand Prix at Peronne.

A principle reason the FIA awarded its prestigious FIA Members’ Club Heritage Cup to the Rolex Monterey Motorsports Reunion last year was in recognition of the event’s deep care for preservation, restoration, race provenance and diversity of cars. This year, there is an incredible span of 84 years between the oldest and newest. The oldest distinction goes to the 1911 National Speedway Roadster in Group 1A, while the more modern car is the 1995 Nissan 240SX in Group 7B.

Additionally, two-time Formula One World Champion Mika Häkkinen returns and will be sharing history in the McLaren F1 GTR during exhibition laps. Häkkinen entertained fans at last year’s Rolex Monterey Motorsports Reunion when he drove the 1974 F1 Championship-winning McLaren M23 around the track.