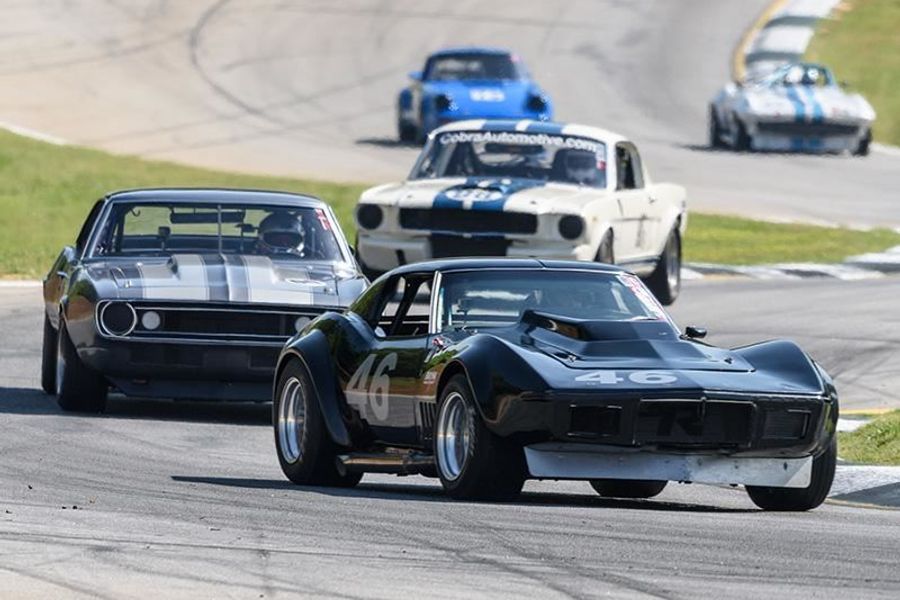 Six different drivers won races Friday in a competitive opening-day of racing at the 40th Classic Motorsports Mitty presented by Hagerty, which featured a fast-paced string of four feature races that included twin Bob Woodman Tire International/American Challenge sprints and The Mitty debut of the HSR Classic RS Cup and Global GT racing series.
A Road Atlanta showdown between classic international sports cars and American-made high-performance machines, the Bob Woodman Challenge races were divided into a pair of period-specific groupings.  The decision to split the field came after HSR received a healthy entry of 300-race cars for this weekend's milestone-running of The Mitty. The end result was double the action and on-track excitement.
Bob Woodman Challenge Race A, for 1960s and '70s era big-bore race cars, kicked things off and quickly became a battle between two 1960's-era Corvettes and a Mustang Boss 302 against three 1970's Porsche RSR and IROC 911s.
At the checkered flag, Jody O'Donnell took overall and American-class honors in his 1969 No. 46 Corvette Coupe. O'Donnell made his winning pass on the pole-sitting SpeedConcepts 1974 No. 141 Porsche 911 IROC of Todd Treffert, who finished second overall and won the International class.
O'Donnell's teammate Mike Donohue finished third overall and second in the American division in his 1963 No. 33 Corvette Roadster, one spot ahead of second-place International finisher Fritz Seidel in his Ecurie Engineering 1973 No. 85 Porsche 911 IROC.
The American/International parity continued through the final podium positions, with Curt Vogt fifth overall and third in the American class in his 1970 No. 23 Mustang Boss 302, prepared by Cobra Automotive. Mike Banz was third in International in his 1974 No. 13 Porsche 911 RSR, prepared by Heritage Motorsports, crossing the finish line sixth overall.
Bob Woodman Race B, which gave small-bore cars from America and overseas a chance to have their own race, immediately followed Race A.
Pole-sitter Scooter Gabel led the field to the green flag in his 1999 No. 54 BMW Z3 Coupe but soon gave way to three different competitors that all stepped up to officially lead the 8-lap sprint overall. Brady Refenning, Craig Chima and George Balbach, in the 1966 No. 0 Porsche 911, all led the race, which came down to a battle in traffic in the 51-car field to decide the overall and International-class winner.
Chima took the white flag up front in his 1962 No. 5 Lotus Super 7 but Refenning, guest driving in the 901 Shop 1974 No. 8 Porsche 914/6 GT owned by Jerry Peters, slipped by for the victory. Chima was second and Gabel finished third.
American-class honours went to Dickson Rathbone in his 1966 No. 111 Mustang 2+2. The winner shared the American-division podium with Tom Cotter and his SascoSports-prepared 1964 No. 33 Corvette Roadster and Michael LeVeque, who finished third in his 1965 No. 5 "Yenko Stinger" Corvair.
The HSR Classic RS Cup, a showcase series for 1970's Porsche 911 RS, RSR and IROC models, appeared at The Mitty for the first time. Less than an hour after their battle in the Bob Woodman race, Treffert, Seidel and Banz continued their intense competition in the 8-lap Classic RS Cup sprint.
Seidel emerged the winner, taking the lead early and leading Banz across the finish line along with third-place finisher Angus Rogers in his 1973 No. 15 Porsche 911 RSR prepared by KMW Motorsports. Treffert was also in the hunt but retired after a mid-race spin in Turn 7.
Debuting along with the HSR Classic RS Cup last Memorial Day Weekend in the WISKO Grand Prix at VIRginia International Raceway, HSR Global GT is home to modern but recently retired GT-specification race cars from the last 10 to 15 years.
The Global GT race closed-out Friday's schedule and produced another first-time series winner with Alex Welch and the Redbeard Race Support 2012 No. 8 Porsche 911 RSR.
Justin Jackson finished second in his BCS Racing 2007 No. 423 Porsche 997 GT3, and Henri Sicotte raced to third in his 2010 No. 88 Chevy Camaro GT.R prepared by GT Racing.