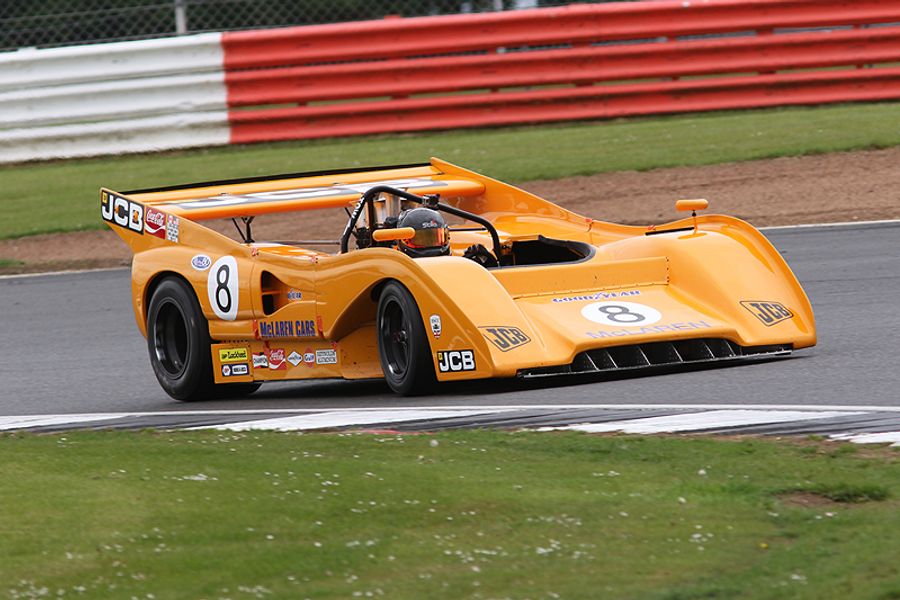 The HSCC Thundersports Series has received a tremendous initial response to the newly-announced races at the Silverstone Classic (26th-28th July).

In the two weeks since the Historic Sports Car Club announced that the Thundersports category will have two races at the biggest historic racing festival of the season, the first 30 entries have already been confirmed. With a grid capacity of 50-cars, the Club is hoping to have more than 40 cars racing on the Silverstone GP circuit.

The Thundersports season started at Silverstone in mid-May with a field headed by the stunning DFV-powered Lola T282 of Leo Voyazides, the Chevron B26 of John Burton and the thundering 8-litre Can-Am McLaren M8F of Dean Forward.  Many 2-litre sports-racers and a bumper field of Sports 2000s packed out the grid and they will now be joined by a range of newcomers to the series.

The hard-charging Forward is back with the vast ex-John Foulston McLaren M8F, which he races on behalf of its owner Jamie Thwaites. Thwaites is the son of successful 1960 and 1970s sports car racer Richard and remembers the 8-litre monster vividly from his formative years. Now, he has bought the car from the JCB operation and hopes to race it himself.

“My dad used to race against that car in historics in the 1980s and I’ve been in love with it since I was a kid,” said Thwaites. “I spent my early life following my dad around racing.” Thwaites will join the Thundersports grid at Silverstone in a Chevron B19 as he looks to build his racing experience.

Burton is one of Britain’s most experienced sports-prototype racers of his era and was a star of the European 2-litre Sports Championship in 1970s. He’s had a life-time love affair with Chevrons and continues to race his B26 with pace and style.

A very special entry is the Lola T310 of Georg Hallau, which is the one-off 1972 Can-Am project from Lola. It could not compete with the hugely powerful Porsche 917s but the striking low-profile Chevrolet-powered Lola is a fantastic car that marked the end of Lola’s Can-Am sojourn. More V8 Lolas will be racing in the form of classic T70 Mk3Bs for Michael Lyons and Mark Dwyer, and both cars will be battling with the more nimble 2-litre cars.

A major feature of Thundersports is the tremendous field of Ford Pinto-powered Sports 2000 and this will be very much a race within a race. Category pacesetters include former Le Mans racer Ross Hyett, Jonathan Loader and Andy Chittenden, while welcome European visitors include Thomas Hardy and Andreas Floth.

Andy Dee-Crowne, CEO of the HSCC, said: “The response to the Thundersports races at the Silverstone Classic has been superb and with more than a month to go we are expecting more entries to be confirmed. This is tremendous news for Thundersports and shows the demand for quality race dates for these cars. We have 70 cars entered for the Historic Formula 2 races and nearly 50 cars for the Classic F3 races, so the HSCC now has around 150 entries for this very high-profile event.”