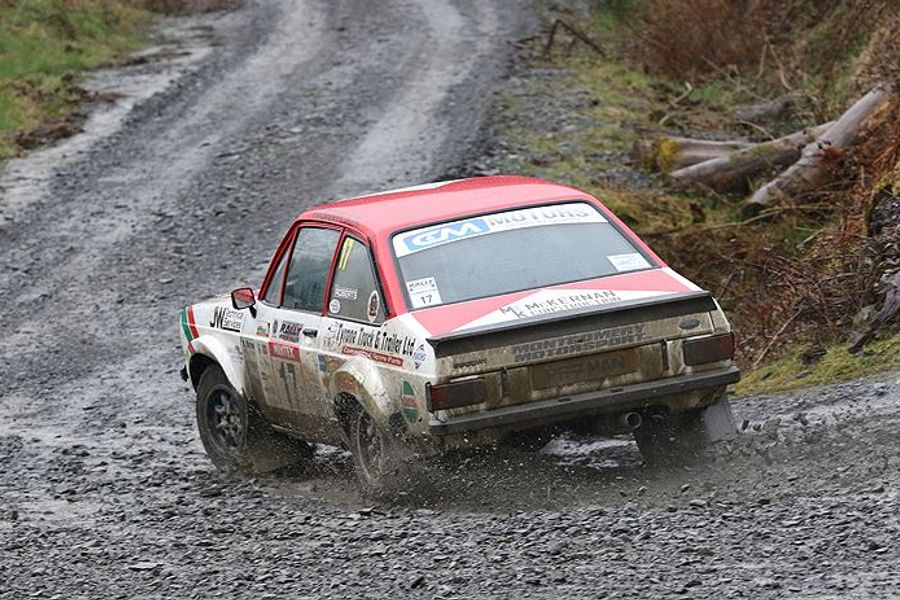 The 2016 Mintex MSA British Historic Rally Championship is finely-balanced heading into round four, the Severn Valley Stages Rally on Saturday 4th of June. After three rounds, Irish ace Paul Barrett heads the overall points’ table after three tremendous rallies in his Pinto-powered Ford Escort Mk2. Barrett jumped ahead when both Jason Pritchard and Nick Elliott fell victim to the notorious Kielder forest on the recent Pirelli Carlisle Rally. Now comes a return to Wales for some classic forest stages at a point in the calendar when there is everything to play for. The Roger Albert Clark Rally Motor Club promotes the MSA BHRC under a five-year contract and 2016 is the second year of that agreement. The calendar covers six gravel and two asphalt rallies, with a double-header on the Isle of Man in September to make nine rounds. The team at Special Stage will film all eight events and produce hour-long programmes to give the BHRC some of the best TV exposure in British rallying. Pritchard and Phil Clarke had a superb start to the season with wins on the two opening rallies, but slid off on an icy patch when they led the field into Kielder five weeks ago. This really is home ground for Jason, who can see the Royal Welsh Showground from his house, and another win on familiar stages would put them right back into the title race. They will head the Holton Homes Category K for cars prepared to FIA Appendix K regulations. Elliott and Dave Price looked good to clock up victory in Kielder until they also went off and inflicted considerable damage on their Escort Mk2. A big score on the Severn Valley is vital for their title bid. Right in the mix after winning on the Pirelli are Joe Price and Chris Brooks and they are another crew expected to be strong on these familiar stages. They will battle with Elliott, and a raft of other rapid contenders, in the RSR Historic Engineering Category 3. Leading the chase of the leading pack should be the Fiat 131 of Matthew Robinson/Sam Collis, which gets quicker with every outing, and the rapid Escort Mk2s of Steve Bennett/Iain Tullie, Rudi Lancaster/George Gwynn and Simon Webster/Jez Rogers. In class D3, for the Pinto-powered Escort Mk2s, Barrett and Dai Roberts are setting a fearsome pace but Ben Friend and Cliffy Simmons are giving valiant chase. Meanwhile, in class D4, Guy Anderson and Stephen Davey are getting quicker and quicker in their Talbot Sunbeam Lotus. Class D2, for the 1600cc cars, is home to the giant-killing Escort Mk2 of Chris Skill and Tom Jordan. The Capital Construction Category 2 is being dominated by Stanley Orr and Guy Weaver (Escort Mk1), who have won three times on the trot to be right in the hunt for the overall BHRC title. In class C5, for the BDA-engined Escort Mk1s, the battle is currently between Simon Tysoe/Paul Morris and Warren Philliskirk/Nigel Hutchinson, while Phil Jobson and Arwel Jenkins are closing the gap to the class contenders. Class C2 is all about the remarkable Adam Milner and co-driver Roy Jarvis in their 1600cc Escort Mk1. Despite minimal experience, Milner has set an incredible pace and recorded top six stage times against the more powerful cars. He has yet to have a clear run this season, but when he does the result will be outstanding. Back out in the Vintage Car Radiator Company Category 1 are rounds 1 and 2 winners Bob and Dale Gibbons in their Ford Cortina MK2 GT and they will again go up against the Lotus Cortinas of Bob Bean/Captain Thompson and Paul Mankin/Desmond Bell. Meanwhile, in class B2 Phil Harris will try and take his unbroken win sequence into double figures in his Mini Cooper S. The rally will be based at the Royal Welsh Showground in Builth Wells. The first car will start at 8.30am on Saturday and return to the finish at around 3.40pm.