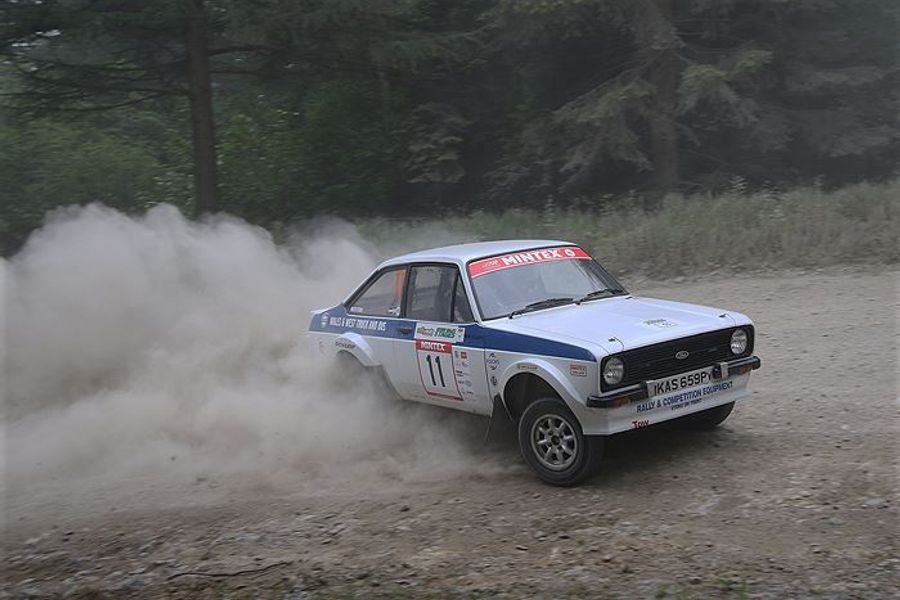 The 2017 Mintex MSA British Historic Rally Championship moves back to Wales for for round four, the Severn Valley Stages (Saturday 3rd June) with Nick Elliott and Dave Price aiming to make it four wins from four rallies in 2017.
The Roger Albert Clark Rally Motor Club promotes the MSA BHRC under a five-year contract and 2017 will be the third year of that agreement. The calendar covers five gravel and three asphalt rallies, with a double-header on the Isle of Man in September to make nine rounds. The team at Special Stage will film all eight events to give the BHRC some of the best TV exposure in British rallying.
The season started in mid-February on a damp and foggy Red Kite Stages when three crews marked themselves as the early season pace-setters in Ford Escort Mk2s. Elliott and Price emerged victorious that day over reigning champions Jason Pritchard and Phil Clarke while Joe Price and Chris Brooks showed typically strong pace before being sidelined with a failed diff.
The story was similar a month ago on Rally North Wales when Elliott and Price again set the seal on victory with a storming opening salvo through wet and slippery stages. Pritchard struggled to find his rhythm and was running third until Price went out after an off left his car parked on its side. Pritchard moved up to second but was nearly caught on the final stage by the increasingly rapid Escort Mk2 of Rudi Lancaster/Guy Weaver.
A year after crashing out of the 2016 rally, Elliott and Price continued their impressive form with their third win in a row on the Pirelli Historic Rally at the end of April. They finished with a winning margin of just 6.5 seconds over Pritchard/Clarke after a day-long tussle in dry and dusty conditions in Kielder forest.
Now comes a return to the classic Welsh forests on the Severn Valley Stages and the prospect of another dusty rally. Elliott and Pritchard both know these stages well and this could be a critical point in the championship trail. If Elliott can make it four from four, he will considerably strengthen his hand as the calendar heads into three asphalt events over the summer months. While Elliott has very limited asphalt experience, Pritchard is as accomplished on asphalt as he is on gravel.
Elliott/Price also head Category 3 where Lancaster and Weaver are getting ever closer to the absolute pace. More strong Escort Mk2s in Class D5 include those of Simon Webster/Jez Rogers, Steve Bennett/Osian Owen and Tim Freeman/Paul Williams.
Pacesetters in class D3 for the Pinto-powered Escorts in Category 3 have been Ben Friend and Cliffy Simmons (Ford Escort Mk2) and they’ll be aiming to get well up among the BDG-engined cars. Chasing Friend in class D3 is the Escort Mk2 Pinto of Rex Ireland/Adrian Scadding, while aiming for a BHRC debut on this event is young Josh Browne, son of experienced driver Chris, who has Jane Edgington co-driving.
Stanley Orr and Stephen McAuley have set the early pace in the Capital Construction Category 2 but were not entered at the time of writing. The opposition to Orr is topped by Phil Jobson and Arwel Jenkins in their Escort Mk1, while new to class C5 for this event are Andrew Stokes and Adrian McNally, who step up from their usual Hillman Avenger to a full-spec Escort Mk1.
Class C2, for the 1600cc cars, is the domain of the flying Hillman Avenger of Elliot Retallick and Tim Tugwell and Retallick is unbeaten this year. Meanwhile the class will also feature a three-way contest among the Escort Mk1s of Aziz Tejpar/Steve Davey, husband and wife Stuart and Linda Cariss and local crew Mal Bayliss/Siobhan Pugh.
In the Vintage Car Radiator Company Category 1, the Mini Cooper of Phil Harris and Richard Suter has already taken three wins in 2017 and is rejoined on this event by the Ford Cortina GT of Mike Barratt and Mike George.
The rally will be based at the Royal Welsh Showground in Builth Wells. The first car will start at 8.30am on Saturday and return to the finish at around 4pm.