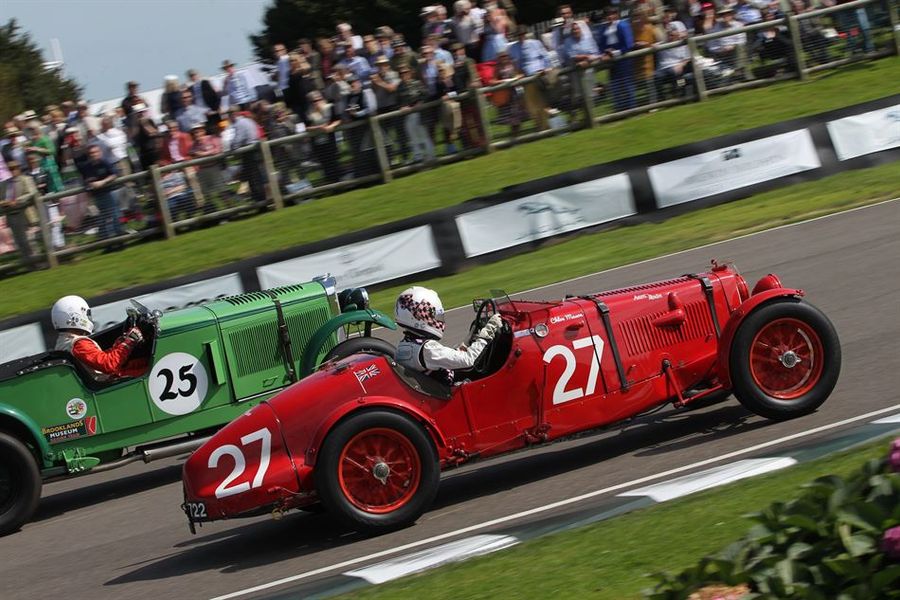 A record sell-out crowd of 149,000 enjoyed a sensational 18th Goodwood Revival Meeting during the weekend of September 11th to the 13th at Goodwood Motor Circuit. Outstanding on-track moments of the weekend included the first gathering in history of all six original Shelby Daytona Coupes – on the 50th anniversary of the organisation’s World Sportscar title – and the honouring of the career of legendary racer, team boss and constructor Bruce McLaren.

Seventeen-year-old Peter de la Roche, on his first visit to Goodwood, secured victory in the Earl of March Trophy for post-war 500cc single-seaters, taking the lead at the final corner of a scintillating race, while success in the Lavant Cup, held exclusively for 1950s Ferrari sports prototypes, went the way of James Cottingham’s Ferrari 500 TRC.

The 75th anniversary of the Battle of Britain was commemorated with a poignant on-track moment on Sunday afternoon that featured 94-year-old Wing Commander Tom Neil, a Royal Air Force veteran who saw active service during the battle, and with an evocative Spitfire flypast.

Track displays included a collection of over 50 ‘Series’ Land Rovers and more than 25 US ‘Gassers’ that lit up their tyres with a series of spectacular burn-outs each morning, while the Earls Court Motor Show central concours celebrated Ferrari through the ages.

Off-track, the 60th anniversary of the Fish Finger was marked with an authentic trawler while 50 years of Youthquake was marked with a 3D billboard featuring live models in Miniskirts. Bonhams’ Saturday sale of historic cars and automobilia resulted in £763,000 being achieved for Keith Richards’ Bentley ‘Blue Lena’ while the Revival High Street featured period stores from Tesco, Kenwood, Bendicks and more.

Lord March said: “The 18th Goodwood Revival drew a record sell-out crowd, who not only witnessed some of the most iconic racing cars ever built dicing wheel-to-wheel, but also celebrated the career of motor racing legend Bruce McLaren, saw - for the first time in history - all six original Shelby Daytona Coupes together on track and joined an incredibly poignant and fitting tribute to the bravery of all those who fought in the Battle of Britain.

“My sincere thanks to everyone who came for their support and enthusiasm for the event, which continues to be cherished by enthusiasts of motor racing and vintage culture across the world.”

Gallery: The Aircraft of the Goodwood Revival