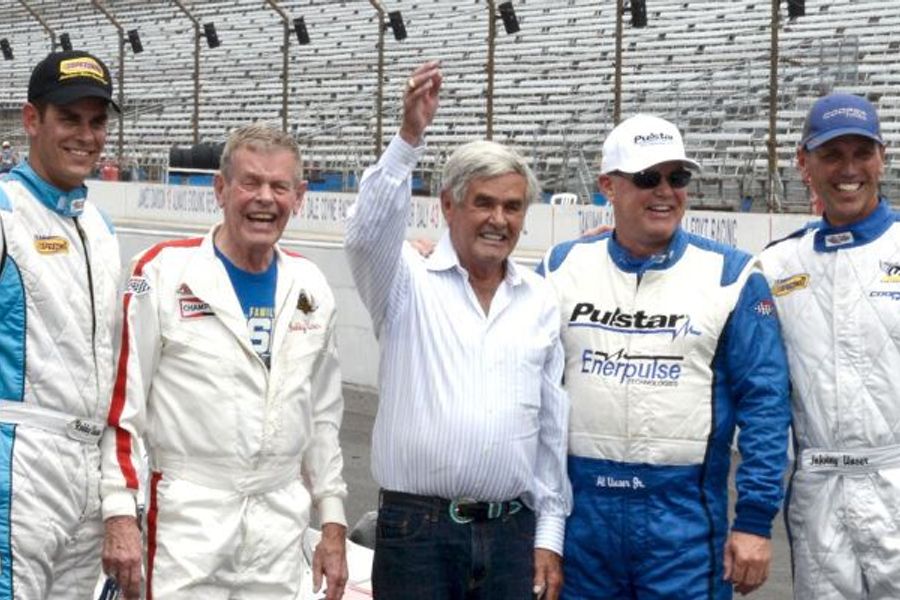 The Sportscar Vintage Racing Association has today announced that once again there will be a full complement of Unsers entered in this year’s Fathers’ Day Weekend Indy Legends Pro-Am at the Indianapolis Motor Speedway. Robby and Johnny Unser join the previously announced Al Unser and Al Unser Jr. in the Saturday, June 17th feature race, and are bringing along their “adopted cousin,” Willy T. Ribbs, who made Speedway history as the first black driver to qualify for the Indianapolis 500.
Robby is the defending champion of the A Production class of the race, which he won last year with co-driver Andre Ahrle in the latter’s 1965 Shelby Cobra.
“It’s been a thrill getting to know the entire Unser family over the past few years,” says SVRA CEO Tony Parella. “I was always such a fan of Big Al and Bobby growing up, but to get to know them on a personal level and learn things I didn’t know, like the special relationship with Willy, is amazing. I couldn’t be more honoured than to have great champions like these drivers embrace our sport and help us build it.”
“Like a lot of people, Willy started calling my dad, ‘Uncle Bobby,’ and it just felt natural,” says Robby, a two-time Indy 500 starter. “Our whole family respects the challenges Willy faced as a black driver climbing his way to the highest levels of the sport. Unsers understand that work ethic, that commitment.”
“One of the great things Tony has done with the Pro-Am is give racers a meaningful reason to reconnect. Robby and I have always been tight, so we have fun challenging each other and helping each other too,” says Ribbs. “I will always remember Uncle Bobby telling me how much he respected what I had accomplished. The Unsers really do feel like family, and it’s a big deal to be racing with all of them again.”
Johnny’s father Jerry was the first of the famous family to crack into the Indianapolis 500 field in 1958. Unfortunately he lost his life practicing at the track the following year. Following Dad’s footsteps, Johnny is a veteran of five consecutive Indianapolis 500s beginning in 1996. He remains active in the sport as an Indy car official, technical advisor and spokesperson for Cooper Tires as well as mentor to young, aspiring drivers. First and foremost in that regard is Johnny’s teenage daughter Loni, who is launching her racing career as a driver in spec Mazda Miata.
“If Loni got the right offer to drive in one of the SVRA class races at the Brickyard, we would certainly take a look at it,” says Johnny. “One interesting aspect of the Brickyard Invitational is how many drivers show up with their helmet and someone offers them a ride. I know that happened with Matthew Brabham last year.”
Robby Unser competed in two Indianapolis 500s, finishing fifth and eighth. He was Indy Racing League rookie-of-the-year in 1998 with two runner-up race finishes. True to his family’s legacy, he won nine Pikes Peak Hill Climb events.
Ribbs is also a two-time qualifier for the Indianapolis 500, in 1991 and again in 1993. He was also tested for a Formula One seat, in 1986 with Bernie Ecclestone’s Brabham team. He was Trans Am’s most prolific winner from 1983 through 1985, when he scored 18 of his 19 career-total victories. He was series rookie-of-the-year in 1983, winning five times and more than any other driver. After Trans Am, he moved to Dan Gurney’s IMSA Toyota team for two years and picked off 10 overall victories.
The Pro-Am feature Johnny, Robby and Ribbs will compete in is a 45-minute race on the Speedway’s 2.43-mile Grand Prix road course. The cars are racing machines from the “Group 6” SVRA class. As in previous years that will include 1963 to 1972 vintage Corvettes, Camaros and Mustangs but also race officials are considering adding other Group 6 marques such as Porsche and Jaguar for variety. Look for additional announcements of Indianapolis 500 drivers to be entered in the coming weeks. As in the previous three years, the professionals will be paired with amateur drivers, splitting stints at the wheel at their discretion.
In addition to the Pro-Am, there will be a festival of other activities including the Motostalgia car auction, the Hagerty Insurance “shine and show” car corral, a “Celebration of Motorcycles” with vintage motorcycle racing and displays, and 500+ vintage racers ranging over 100 years of automotive history racing in SVRA Groups 1 through 12. An oval exhibition featuring a racecar show of judged competition for the A.J. Watson and Sir Jack Brabham trophies led by track historian Donald Davidson will also take place. Also, for the first time ever, the professional Trans Am series will compete as the Sunday afternoon feature race. Heading the pack will be series champion Amy Ruman who has won the crown the last two years.
This year the Brickyard Invitational will be preceded by a new SVRA event at the Speedway, the World Open Wheel Challenge. This event will commemorate 50 years of Formula Ford and will welcome all forms of open wheel racecars, beginning June 8.
SVRA Unser Pro-Am Indianapolis