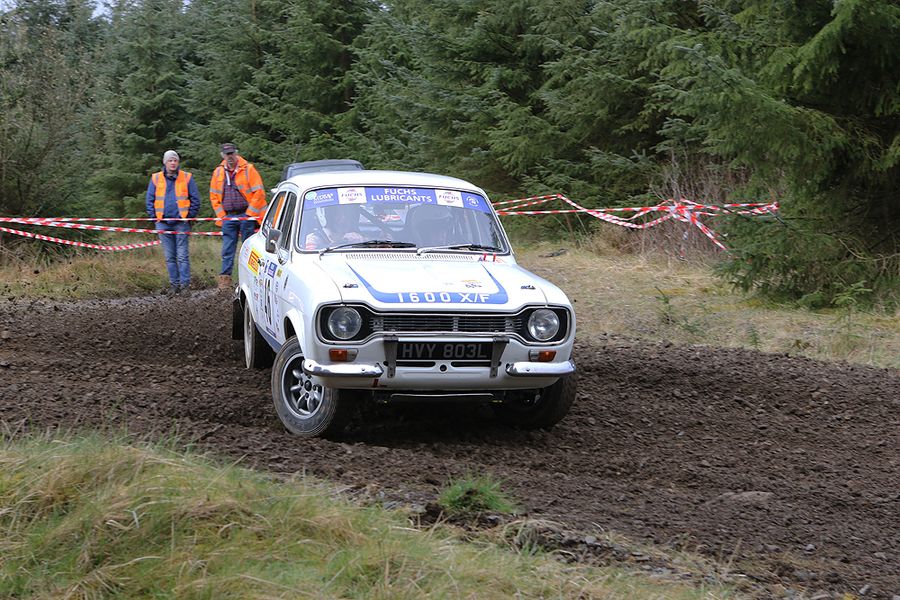 Matthew Robinson and Dave Robson were the toast of Kielder when they won round two of the FUCHS LUBRICANTS Motorsport UK British Historic Rally Championship on the Pirelli Historic Rally on Saturday (27th April).

While first round winners Nick Elliott and Dave Price crashed out on the long Forks stage, Robinson repeated his 2018 victory with a storming drive. Joe Price and Chris Brooks led the chase and took over at the head of the championship points as Adrian Hetherington/Ronan O’Neill completed the overall historic podium. Stanley Orr/Grahame Henderson (Ford Escort Mk1) netted another Category 2 victory while Category 1 went to Bob Bean and Malcolm Smithson (Lotus Cortina).

Running first on the road, Robinson had to clear some gravel and Elliott, running second, grabbed a six-second advantage in the opening stage in Whitesike. Out early after a fairly gentle roll went Alan Walker/Will Rogers while Simon Webster/Jez Rogers lost five minutes with a sticking throttle and later retired at service.

Into the 15-mile SS2 Elliott and Robinson both pushed hard, but Elliott never emerged after going off on a flowing section towards the finish. Initially the crew showed the OK board but then switched to SOS as Elliott realised he had broken his arm and the stage was stopped and then cancelled. Robinson’s lead was instantly over 30s as many crews were red-flagged or unable to start the 15-mile test.

The concluding 15 miles were in Roughside and Pundershaw and to add to the challenge, torrential rain hit the leading crews in Pundershaw. Robinson continued to set the pace and ended the day a minute up on Price/Brooks. Despite a scare on the opening test, a strong second place put Price to the top of the BHRC points’ table after two of the seven rounds.

Hetherington bagged a fine third, only 18s down on Price, while next up were Steve Bennett and Osian Owen after a tidy performance in their Mk2, 20s up the charging Barry Stevenson-Wheeler/John Pickavance. Using Hoosier tyres for the first time, Orr was on a learning curve but ended the rally encouraged and won Category 2 as fifth overall historic. More strong runs over tricky stages came from Rudi Lancaster/Guy Weaver and the flying Lee Ashberry/Terry Mallin who claimed their best result to date.

The redoubtable husband and wife crew of Stuart and Linda Cariss romped to class C2 victory in their 1600cc Escort Mk1 and also finished top in BHRC2. Next up were Bean and Smithson after a trouble-free rally while the BHRC2 podium was rounded out by Philip Atkinson and Louise Gilks in their class C2 Escort Mk1.

Among those to end the day in Kielder ditches were Rob Smith and Alun Cook, who damaged the front suspension of their Escort Mk2 when they hopped over a ditch in the second stage. Finally, Ben Friend and Cliffy Simmons (Ford Escort Mk2) were heading for the top six when a late puncture led to a visit to a ditch and front suspension damage.