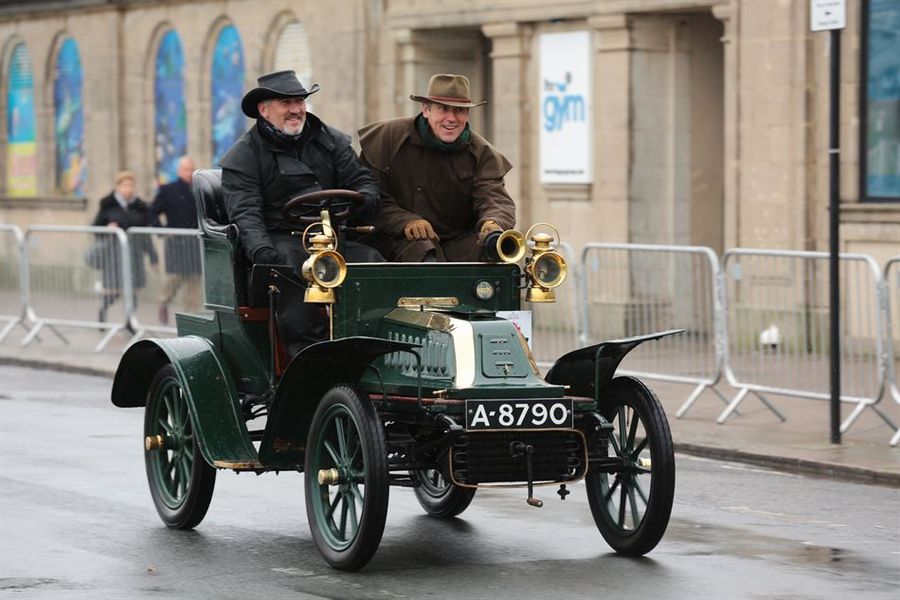 The Royal Automobile Club hasannounced that the 2017 Bonhams London to Brighton Veteran Car Run, supported by Hiscox will be creating an Entente Cordiale in November as the event adopts a French flavour.
Germany’s Gottlieb Daimler and Karl Benz might have invented the world’s first horseless carriage, but the French dominated the early days of the automobile industry. In 1903 alone, for example, more than 30,000 cars were built in France… representing almost half the world’s total production that year.
To celebrate France’s contribution to motoring’s early days, the 2017 Run will welcome many of those pioneering French marques. Two of those names will be familiar to everyone ­– heading the entry will be cars from Renault (established 1899) and Peugeot (first car built in 1889).
They will be joined by cars from more than a dozen other marques. Among the better known are De Dion Bouton, Panhard Lavassor, Mors, Clement and Bolide, while there will even be an example of the patriotically named Napoleon marque (below bottom large).
But the Run is also promising some extremely rare models ready to fly the Tricolore. One is what’s thought to be the only remaining Créanche in existence. Built in 1900 by Société Louis Créanche of Courbevoie, Seine, the voiturette is powered by a single-cylinder De Dion engine. Everything except the body – an exact replica constructed in 1972 – is original.
Another French rarity – and which may also be the only surviving example – is an 1896 Raynaud vis-à-vis. Powered by a 3.8-litre two-cylinder engine, it was advanced for its day and has a wheel rather than tiller steering. It was discovered in Southern France in 1975 and, aside from a repaint and new solid tyres, is absolutely original.
Renault, one of the event partners, will also have something special on the Run. A rare 1900 Renault Type C is currently undergoing restoration and, it is hoped, will be ready for the 60-mile trip to Brighton. New gearbox parts are being cast using the latest techniques, though new parts for the brakes and rear axle are currently being prepared by a blacksmith.
Another Renault, an early Model A Open two-seater built in 1900, will be shipped over to England from Australia where it is currently on display in a museum.
This year, the longest running motoring event in the world will be held, as ever, on the first Sunday in November – which falls on the 5th. As dawn breaks a red flag will be ceremoniously torn and the 400-entries will start their journey from capital to coast. The illustrious Run celebrates the passing into law of the Locomotives on the Highway Act in November 1896, also known as the Red Flag Act and refers to a time when these new-fangled machines had to follow a man holding a red flag.
Open to all vehicles built before 1905, the organisers have seen a 16 per cent rise in entries over 2016 in the first weeks after bookings opened. Early bird entry fee discounts are available until Friday 26th May.
The Run is just one element of the Royal Automobile Club’s London Motor Week. A full week crammed with motoring events, awards and functions, with popular events including the free-to-view Regent Street Motor Show. Held on Saturday 4th November, it turns London’s premier shopping street into a motoring showcase that puts the spotlight on veterans, classics and moderns alike.
Auction house Bonhams will be holding its annual Veteran Car sale on Friday 3rd November, while other events include a motoring Forum at the Royal Automobile Club in Pall Mall and a motoring art exhibition.