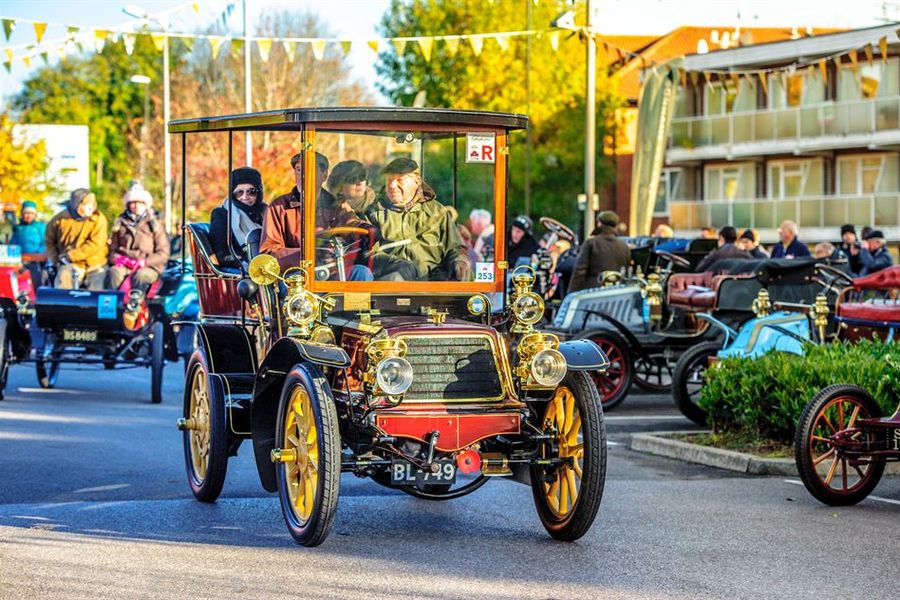 With a bumper entry of more than 450-pioneers from the era of the horseless carriage, this year’s running of the Bonhams London to Brighton Veteran Car Run supported by Hiscox is set to be the biggest for five years.
While the bulk of the entries come from the UK, Europe and the Channel Islands, many of the cars have come from much further afield. Some will make their way to London from Argentina, Australia, New Zealand, Hong Kong, Norway, South Africa and the Unites States.
In all, 23-countries are represented in an entry list, which includes 34-new participants on the Run, while a further 18 have returned after missing the 2016 event.
Scores of different makes are represented from the familiar – such as Ford, Renault and Vauxhall – to the forgotten, such as Brush, Gladiator, Achilles and Bolide.
Variety is the key. While the majority are petrol powered, the starters will include three electric vehicles and a smattering of steam-powered machines. There will be three- and four-wheeled cars, some with tillers and some with steering wheels...
All will leave Hyde Park as dawn breaks on Sunday 5th November and hope to make it to Brighton’s Madeira Drive before 4.30pm to gain a finisher’s medal. Not all will make it, though, with mechanical breakdowns being part and parcel of the epic trip.
Although every car entered on the historic Run – the World’s longest running motoring event – comes with a fascinating history, some are more special than others. Among those are the oldest vehicle on this year’s Run, an 1893 Peugeot which was built a mere seven years after the world’s first car, the Benz Patent Motorwagen, stuttered into life.
This particular Type 3, which will be the first car to leave Hyde Park, is not the most historically significant Peugeot. Another dates back to 1897 and is believed to be the only surviving Type 14 of the 18 originally built still in running condition. The Type 14 was the very first model to use a Peugeot designed horizontal twin engine, prior to its introduction all Peugeots used engines supplied by either Daimler or Panhard.
Other highlights include the extraordinary 1896 Salvesen steam car, which looks more like an early locomotive than a car, and the ever-popular 1901 Pope Waverley electric car from the Harrods stable. The Pope Waverly is just one of a collection of vehicles which Official Partner Harrods has preserved as a nod to the store’s rich history as a pioneer in electric vehicles in London.
Although the majority of the tricycles are single-seat De Dion Bouton models with a single front wheel, the entry includes three tandem-seat Leon Bollees from 1898 and 1899, where the passenger is seated between the two front wheels ahead of the driver, who sits above the engine which drives the single rear wheel.
Among the stars taking part are Pink Floyd drummer and car collector Nick Mason, who will be driving his 1901 Panhard et Levassor, one of almost 200 French-built cars on the Run. Thierry Peugeot and Robert Panhard are two more notable participants – they are both direct descendants of the founders of the famous automotive companies that bear their respective names.
While Germany is generally considered to be the birthplace of the motor car, it was France which accelerated the concept of the horseless carriage and was by far the biggest automobile producing nation as the 19th century turned into the 20th. This year’s Run has adopted a French theme in honour of the country’s contribution to motoring.
As well as familiar French names such as Peugeot and Renault there are no fewer than 65 De Dion Bouton cars and trikes entered and almost 30 Panhard et Levassor models. French rarities include the sole surviving Créanche from 1900 and the only Raynaud in existence.
British marques are also well represented with cars from Vauxhall, Wolseley, Humber, Riley and Siddeley among the more familiar names. One notable veteran, however, is an 1894 Santler Dogcart, believed to be the oldest British car in existence.
The 3½ hp machine was built in the town of Malvern ­– now better known as the home of Morgan – and was originally steam-powered before it was given a Benz petrol engine later in its life.
The Santler is one of several veteran cars due to come under the hammer at the Bonhams London to Brighton Run sale, which takes place two days before the Run. The car is offered complete with a guaranteed entry in the 2017 Run.
Following the Run will be 60 auction winners who bid for a seat on one of three vintage buses. The 60 Go Bonkers to Brighton auction was organised by BBC Radio 2 DJ Chris Evans to raise money for BBC Children in Need. In the three years Children in Need has been involved in the Run, more than £741,000 has been raised for the charity.
As ever, the Veteran Car Run will be held on the first Sunday in November and is organised by the Royal Automobile Club.
As dawn breaks, a red flag will be ceremoniously ripped up and the 450+ entries will start their journey from capital to coast: The Run celebrates the passing into law of the Locomotives on the Highway Act in November 1896, also known as the Red Flag Act, and refers to a time when these new-fangled machines had to follow a man holding a red flag.
The Veteran Car Run is the final act in the Royal Automobile Club’s annual London Motor Week – a week in which the Club presents an array of functions and events to suit all motoring tastes, which this year includes its annual Art of Motoring exhibition, the Motoring Lectures, a Motoring Forum, a dinner with FIA President Jean Todt and the Dewar and Simms Trophy presentations, awarded for British engineering excellence. The week culminates with the free-to-view Regent Street Motor Show on Saturday 4th November and the world-famous Bonhams London to Brighton Veteran Car Run supported by Hiscox.