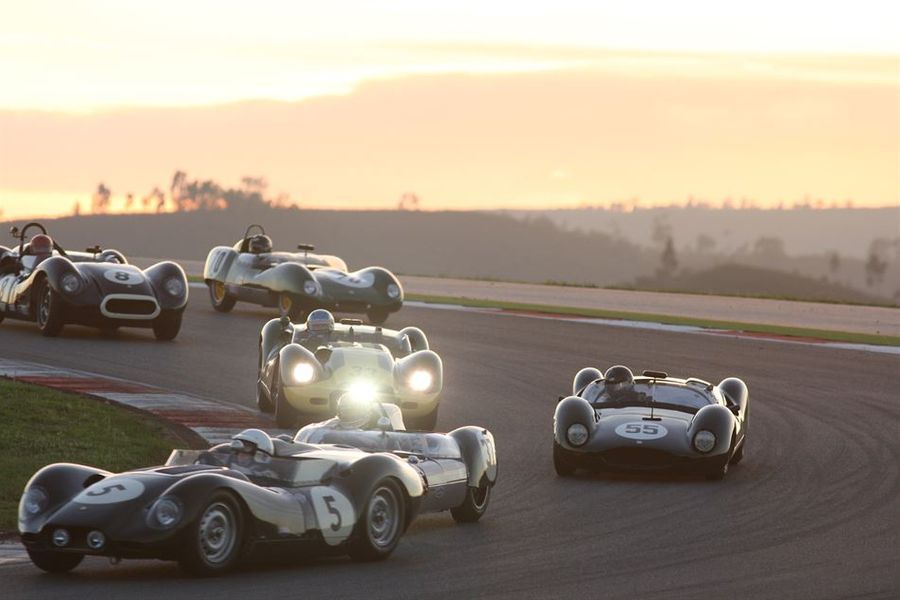 As autumn arrives and the temperatures start to dip in the UK, Motor Racing Legends is quite sensibly preparing to head off for the balmy sun of the Algarve Classic Festival (Oct 28th to the 30th).
The annual visit to the Autodromo International Algarve looks set to be a busy weekend, with a two-hour race for the ’50s Sports Cars combined Stirling Moss Trophy and Royal Automobile Club Woodcote Trophy grid into the dusk on Saturday and a double header of two 40-minute races for the Historic Touring Car Challenge incorporating the Tony Dron Trophy on both Saturday and Sunday.
In the ’50s Sports car race, last year’s winners – Jon Minshaw and Phil Keen – are conspicuously absent from the grid but there are a number of competitors who will be looking to replace them and lift the winners’ trophy. For the last two years the Lister Knobbly of Carlos Monteverde and Gary Pearson has made it to the podium, but they will be up against previous winners Philip Walker and Miles Griffiths in the Lotus 15, as well as the current Stirling Moss Trophy holder - the Ferrari 246S driven by Sam Hancock and Bobby Verdon-Roe.
Further down the grid in the Woodcote Trophy classes, Chris Ward will be looking to clock up another victory for JD Classics in the Cooper Jaguar T33 which he will be co-driving with Derek Hood. But in 2 hours anything can happen and they will need to keep a sharp eye out for the super quick Cooper Jaguar T38 of Frederic Wakeman and Patrick Blakeney-Edwards and the Maserati 250S of Richard Wilson and Martin Stretton.
A healthy grid of cars will be contesting the double-header for the Historic Touring Car Challenge incorporating the Tony Dron Trophy. Four BMW M3 E30s will be out to set the pace including previous race winners Nick and Harry Whale as well as Donington pole setter Mark Smith. In the battle of the monster Ford Capris the Spa race winning Capri of Trowmans/Meaden is absent – leaving the path clear for the Broadspeed Capri of Pearson/Monteverde or Ric Wood/Adam Morgan to have a go at taking the top prize!
Motor Racing Legends’ Chairman Duncan Wiltshire commented “This event is always very popular with our competitors but not just for the weather, the circuit is incredibly challenging to master. Thankfully competitors receive ample amounts of track time and the whole weekend is very sociable and friendly – the perfect way to end the season!”
MRL Portugal Motor Racing Legends