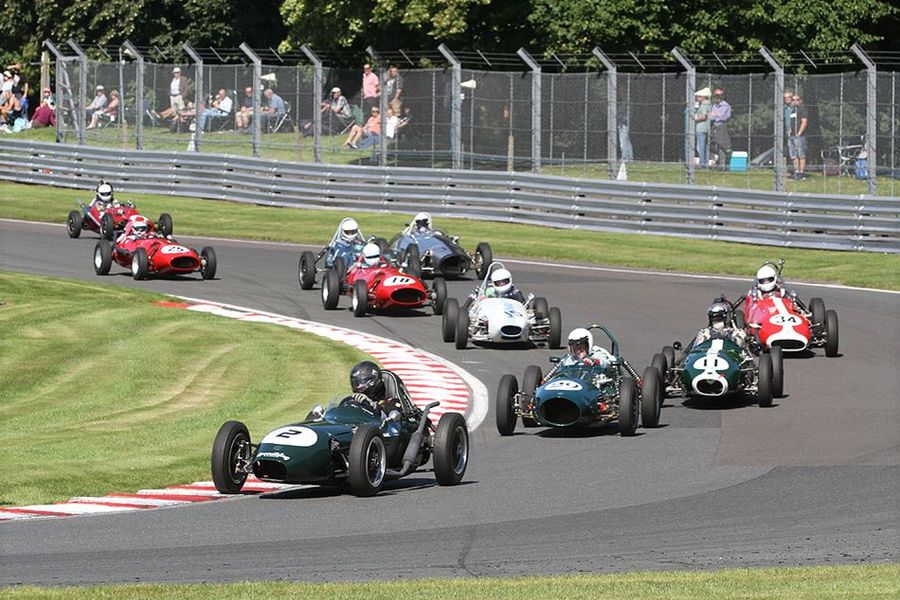 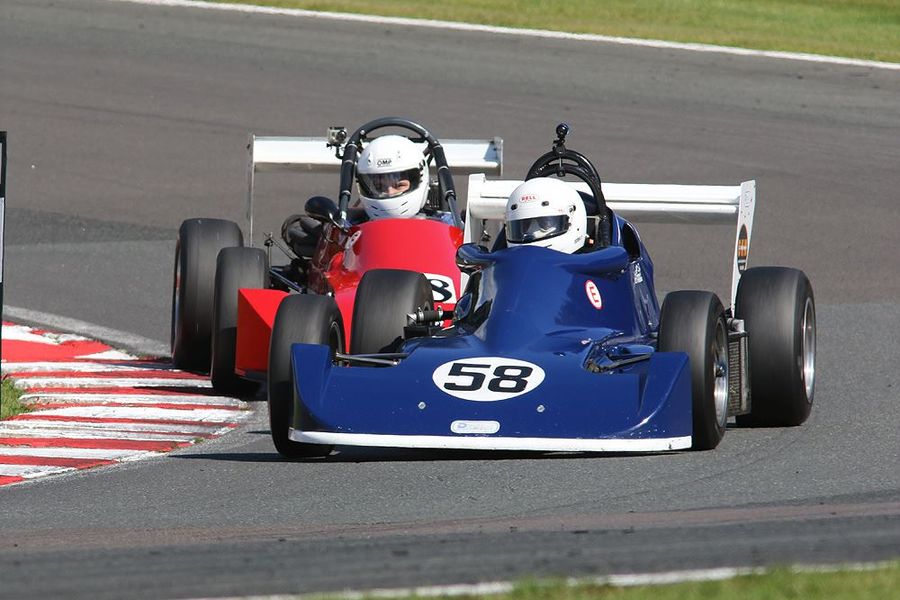 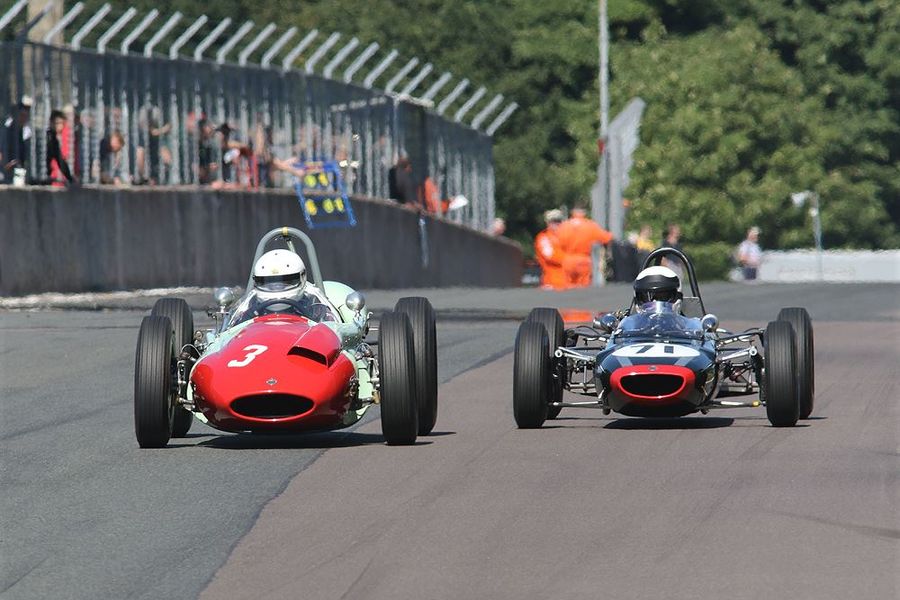 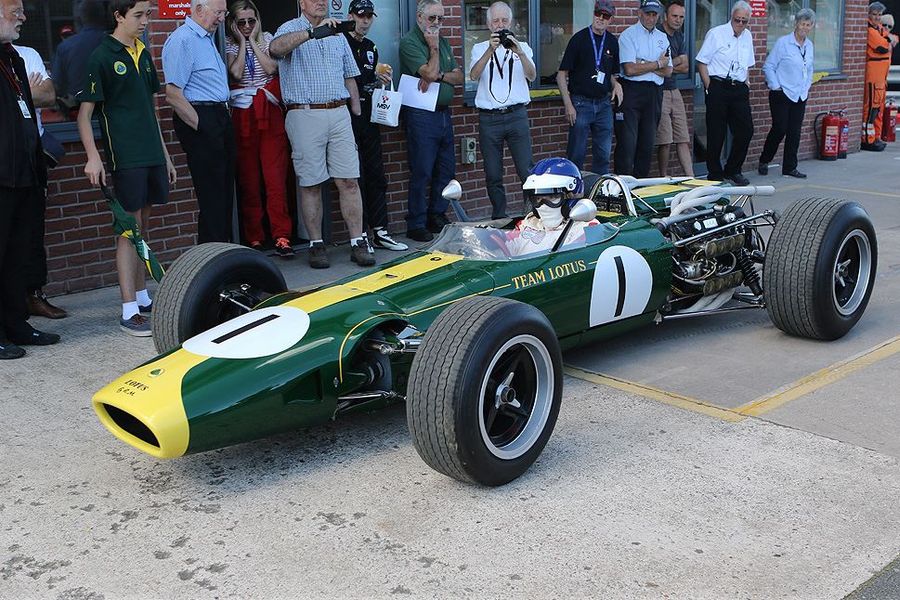 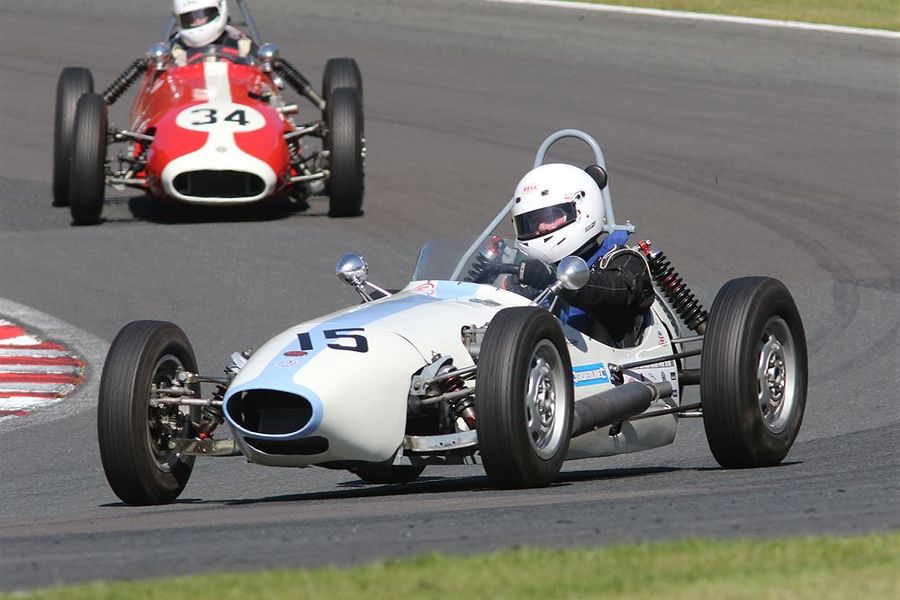 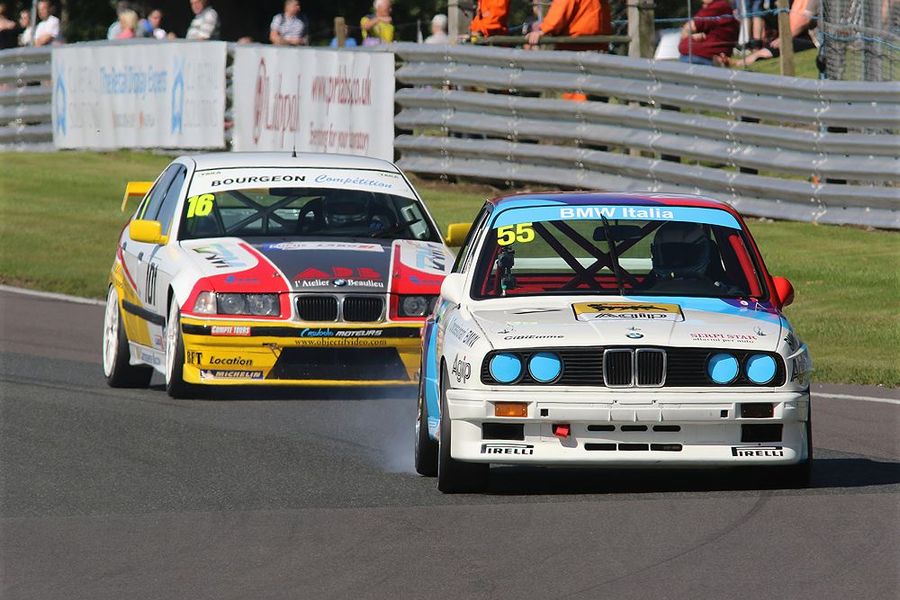 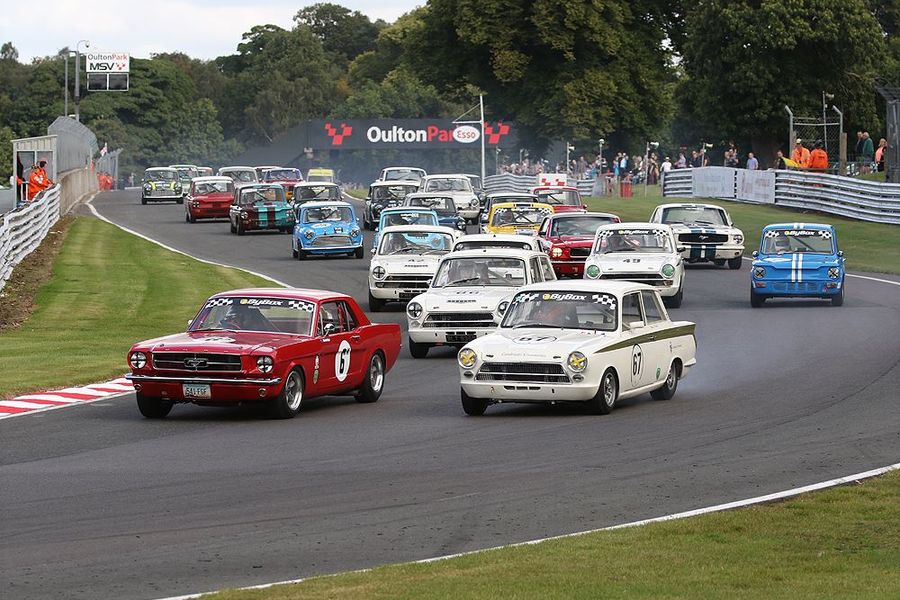 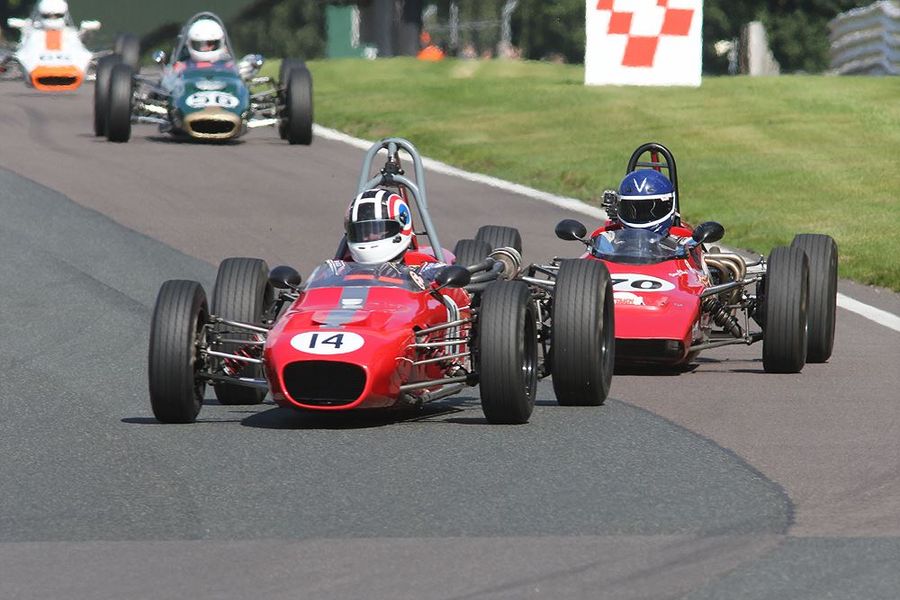 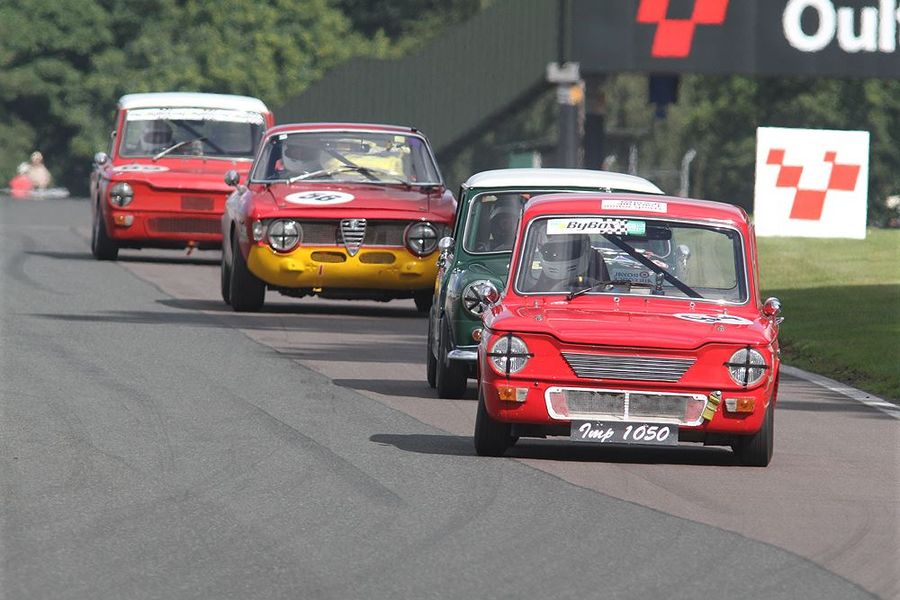 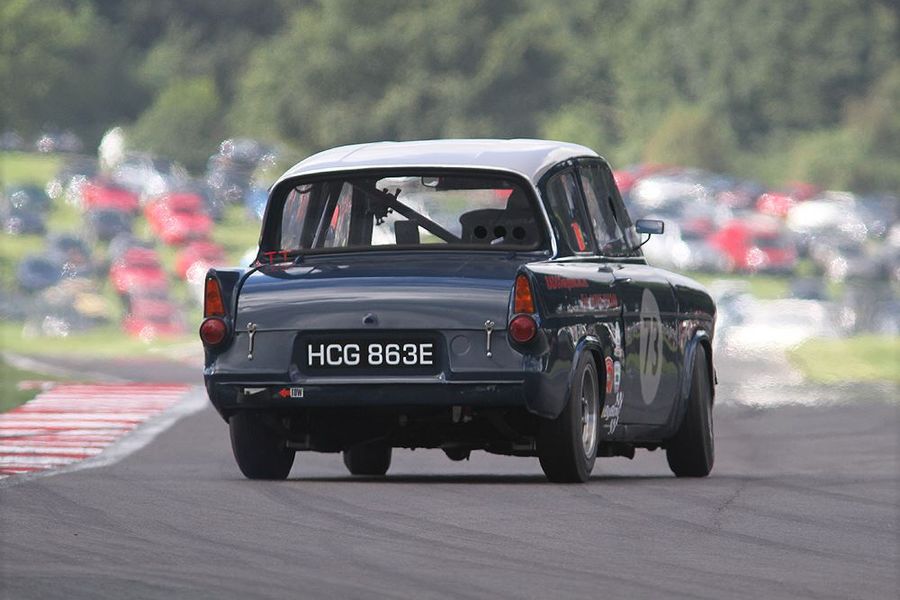 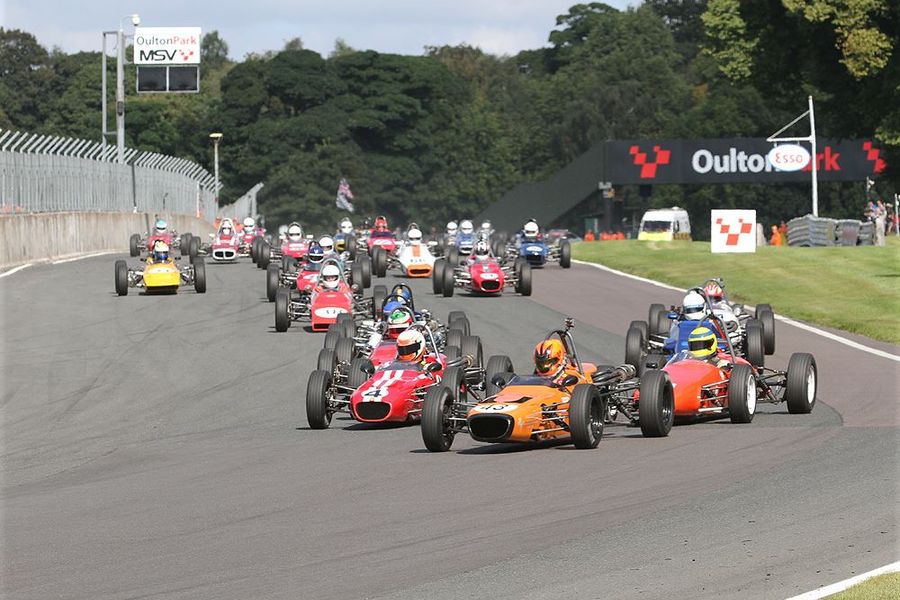 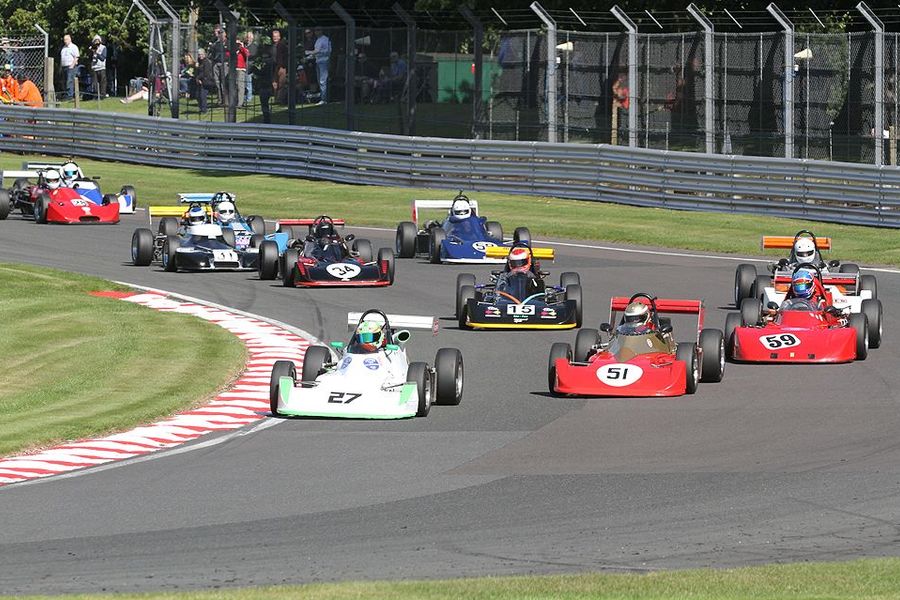 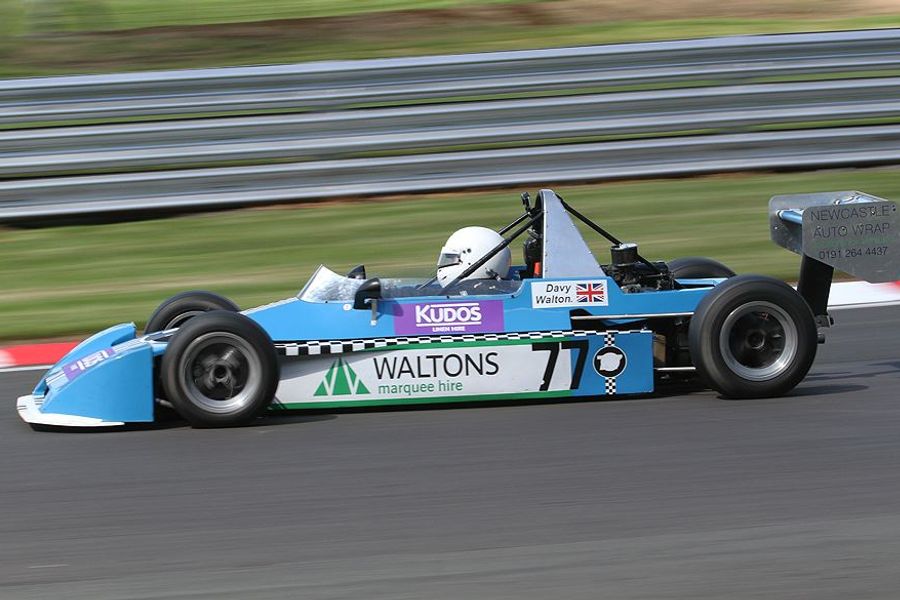 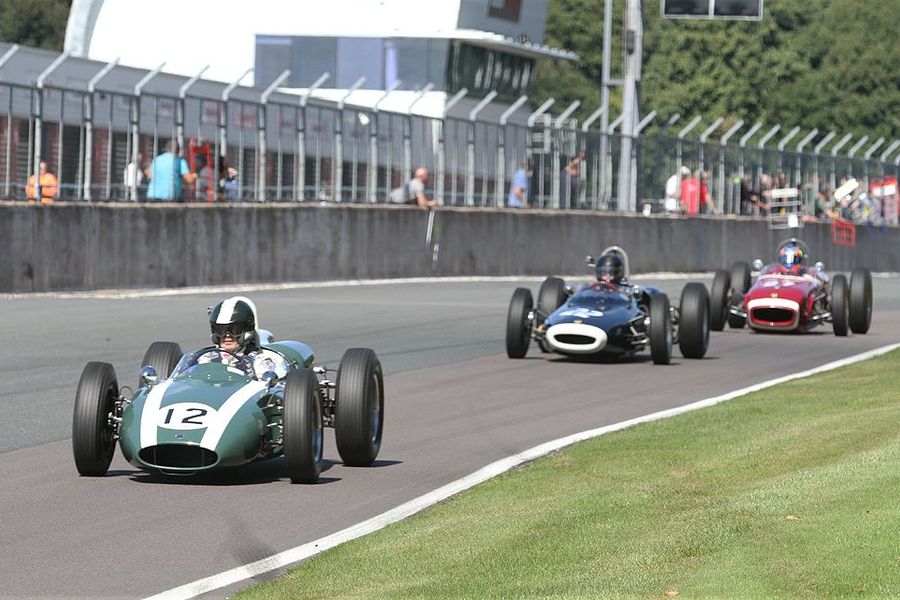 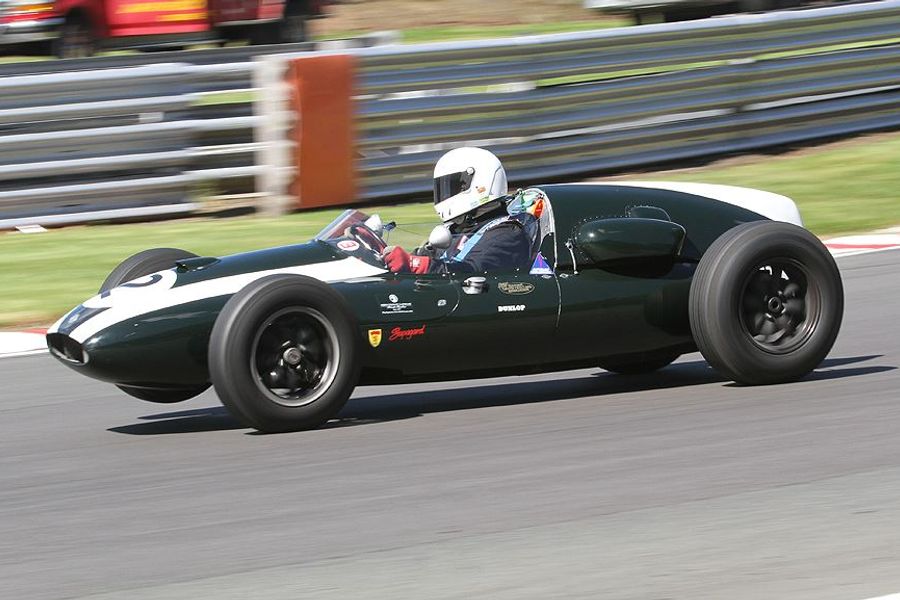 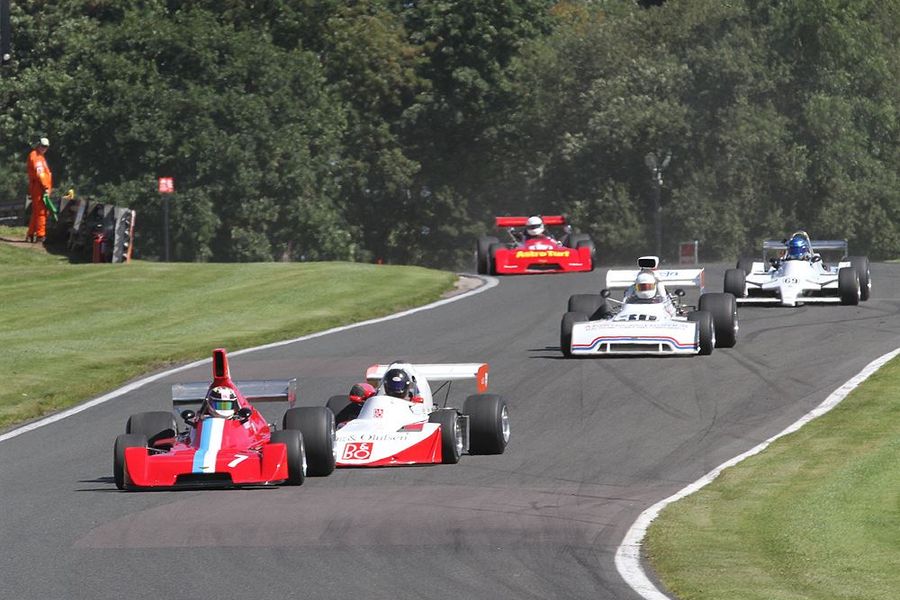 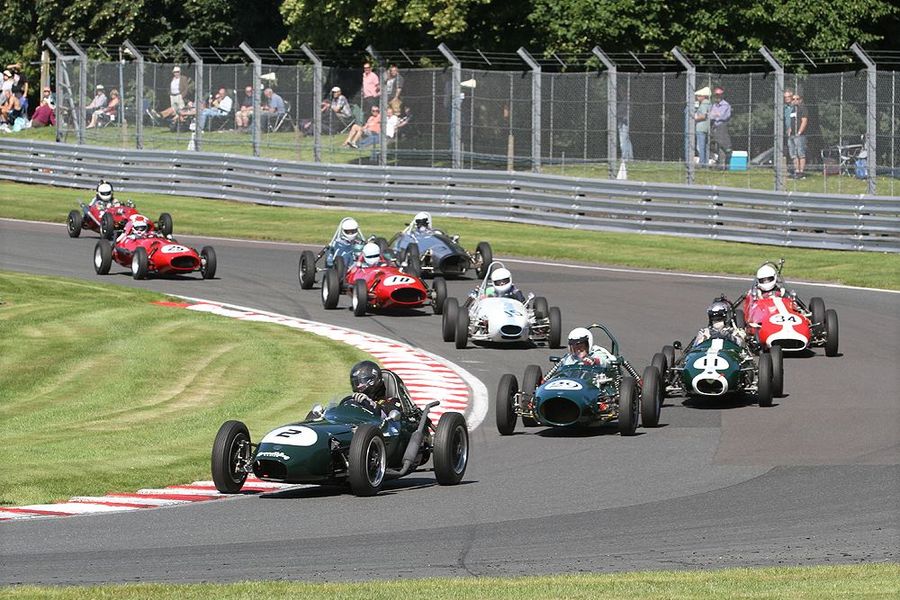 Click on the Gallery tab for images courtesy of Paul Lawrence.
The Historic Sports Car Club’s 50th anniversary season continued in style at the Oulton Park Gold Cup meeting (27th to the 29th of August) with some superb racing in front of a packed crowd at the Cheshire track.
The meeting was dedicated to the memory of the two people who were central to the creation of the HSCC, which dates back to 1966. Guy Griffiths and Betty Haig were the founders of the movement that started the club half a century ago, and they were remembered during the weekend. On-track, some demonstration laps by Andy Middlehurst in his incredible ex-Jim Clark Lotus H16-engined 43 evoked memories of the 1966 Gold Cup.
In honour of Oulton Park’s racing heritage, the famous Gold Cup title was revived with a new Historic Gold Cup which was presented to Peter Horsman (Lotus 18/21) after a double win in the races for pre ’66 Grand Prix Cars from the Historic Grand Prix Cars Association. The trophy was presented by period Lotus Grand Prix mechanic Bob Dance.
There was also a Lotus victory in one of the weekend’s most exciting races as Europa racer Jim Dean won the 70s Road Sports Championship round. Charles Barter forged his Datsun 240Z into an early lead but Dean’s Lotus Europa went with him while Russell Paterson (Morgan Plus 8) and Julian Barter (in Dean’s other Europa) watched the fun from close quarters.
Barter managed to knock his master switch off momentarily with his elbow and Paterson edged ahead of Barter into the final lap before Dean charged past the Datsun on the exit of Cascades. Dean then nipped ahead of the Morgan to score a memorable win.
Two sensational Historic Formula Ford 1600 races thrilled the fans on Monday as Sam Mitchell and Benn Simms shared the wins after lead battles featuring as many as six cars.
The opening race was only settled on the final lap when Callum Grant hit brake trouble and ran wide over the grass at Knickerbrook and Benn Tilley flipped over after an inadvertent clash of wheels with Simms. Through the drama, Mitchell emerged to win from Rob Wainwright and Max Bartell.
The later race seemed set for a second Mitchell win until he spun at Old Hall. Grant took over, but his car hit trouble and he was pushed down the order as Simms came through to beat Bartell by a fraction of a second.
The Historic Road Sports race was a thriller as Kevin Kivlochan got his Morgan Plus 8 to the flag by a fifth of a second from the Lotus Elan of John Davison. The Elan eroded Kivlochan’s lead despite a spin at Druids and Davison’s recovery drive was a highlight.
Mark Dwyer dominated the Derek Bell Trophy with two resounding wins in his Formula 2 March 742. Neil Glover gave chase in his Formula 5000 Chevron B37, but had to concentrate on fending off Paul Campfield’s Chevron B24.
A bumper Historic Touring Car field had no answer to the pace of Warren Briggs in his Ford Mustang as John Avill headed the Lotus Cortina pack in the opening race. In the second race, Briggs was again unstoppable but this time 16-year-old James Clarke raced very well to beat Avill for second.
Stewart Whyte bagged a Super Touring Trophy double with two pretty untroubled wins in his Honda Accord. John Cleland, racing his Vauxhall Vectra for the first time in a year, took second in the first race. Local ace Mark Jones ran third on Sunday but went one better to take second on Monday in his Renault Laguna.
Mark Woodhouse was the cream of the Historic Formula Junior front-engined division in his Elva despite the best efforts of Mike Walker in the Bond, while Andrew Hibberd duly took both rear-engined races.
Andrew Park was top of the Historic Formula Ford 2000 pack to win twice and clinch the championship title by making it nine wins from 11 rounds to date. Tom White pushed his older Osella to second in both races. The final wins of a very full weekend went to John Murphy’s Crossle 22F (Classic Racing Cars/Classic FF2000) and Mark Charteris in Classic Clubmans.
Paul Lawrence Historic Sports Car Club’s 50th anniversary season Oulton Park Gold Cup Gallery