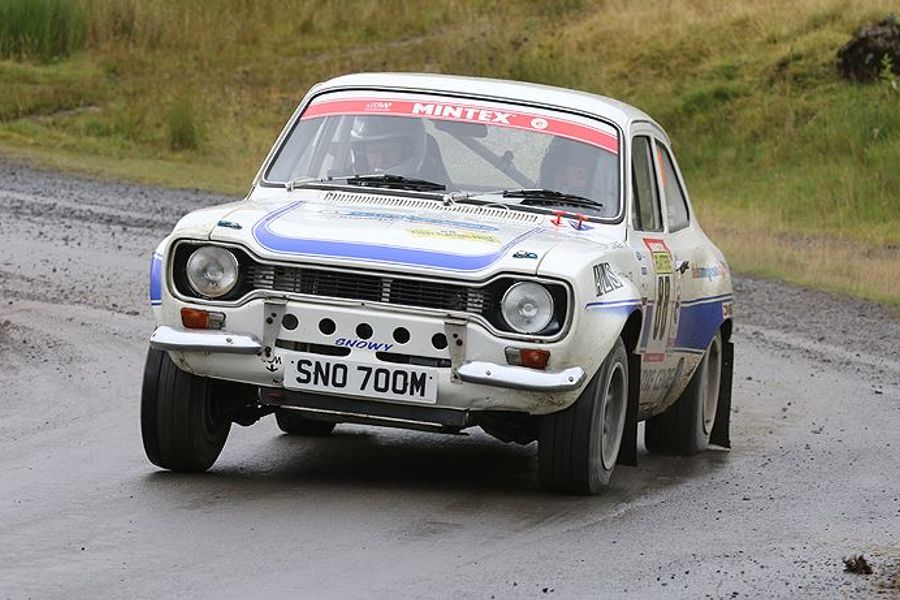 The 2016 Mintex MSA British Historic Rally Championship moves to asphalt for round five, the Harry Flatters Rally on Sunday 31st of July.
After four rounds, Irish ace Paul Barrett heads the overall points’ table after a fabulous campaign in his Pinto-powered Ford Escort Mk2. Now comes a switch to asphalt and the demanding Epynt ranges always deliver a tough challenge, but Barrett is no stranger to asphalt and has every chance of maintaining his overall lead. Local co-driver Dai Roberts will guide Barrett over the crests and dips of this fantastic venue.
The Roger Albert Clark Rally Motor Club promotes the MSA BHRC under a five-year contract and 2016 is the second year of that agreement. The calendar covers six gravel and two asphalt rallies, with a double-header on the Isle of Man in September to make nine rounds. The team at Special Stage is filming all eight events and produce hour-long programmes to give the BHRC some of the best TV exposure in British rallying.
Heading into the rally, defending champions Jason Pritchard and Phil Clarke are badly in need of a strong result after sliding off the road on each of the two previous gravel rallies. They cannot afford another non-score as they bid to retain their title. However, in the Holton Homes Category K for cars prepared to FIA Appendix K regulations Pritchard faces a very big challenge in the form of Rob Smith and Alun Cook on their first championship event of the season.
Making a rare foray onto asphalt to continue a superb run of form in the RSR Historic Engineering Category 3 are Joe Price and Chris Brooks in their Ford Escort Mk2. However, missing the event due to family commitments will be title contenders Nick Elliott and Dave Price.
Stanley Orr and Guy Weaver are having a mighty season in the Capital Construction Category 2 with their Pinto-powered Ford Escort Mk1 and have already competed over Epynt this season. Key rivals to Orr include Simon Tysoe and Cliffy Simmons (Escort Mk1), who are right on the category pace.
In the Vintage Car Radiator Company Category 1, for the pre-1968 cars, the standard should be set by experienced Epynt competitor Bob Gibbons who has his son Dale co-driving in their Ford Cortina  GT. Paul Mankin/Desmond Bell (Porsche 911)  and Bob Bean/Malcolm Smithson (Lotus Cortina) will lead the chase of Gibbons.
The Harry Flatters Rally is organised by Brecon Motor Club.
Harry Flatters Rally Paul Barrett Pinto-powered Ford Escort Mk2 2016 Mintex MSA British Historic Rally Championship