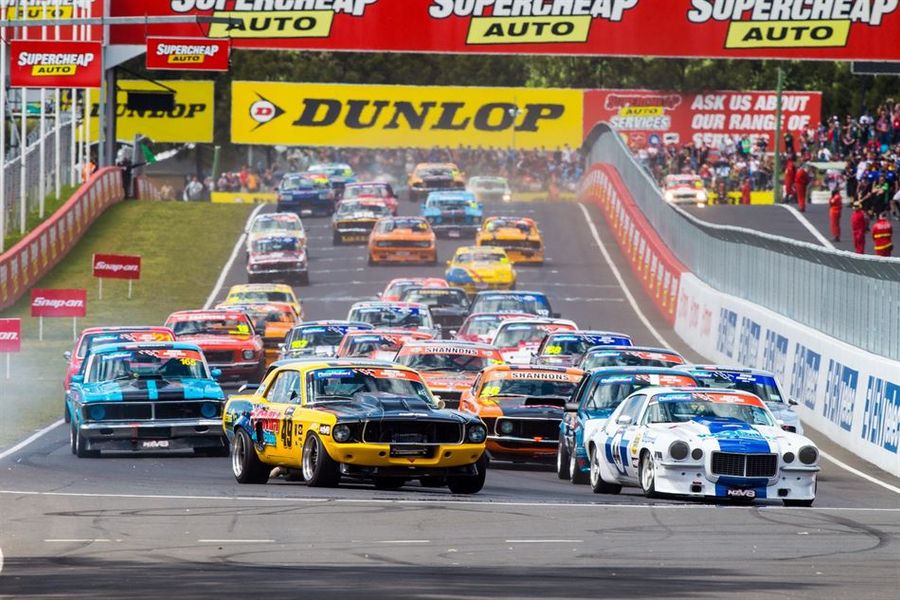 Colin Meadows and Paul Clarke headed a Kiwi sweep of the top five positions in the Wilson Trans-Tasman Challenge WAECO Fridges Trophy Race today at Mount Panorama. The reversed top-50% field saw yesterday’s race winners relegated to the back of the field, opening the grid up to a host of drivers to seize the chance to lead a race at Bathurst.
Meadows and Clarke finished 20th and 22nd, respectively, yesterday but the grid inversion saw them start 1-2 for today’s six-lap affair, the pair dicing amongst themselves as they pulled away out in front of the field.cClarke led the race early in his Ford Mustang, before Meadows was able to grab the lead in his stunning 400ci Chevrolet Camaro mid-race, a car that sports a stunning tribute livery to the famous Chaparral team from US Trans Am competition in the early 1970s.
Never split by much more than a second, the pair crossed the line nose to tail after getting traffic on the final lap.
Steven Ross finished a solitary third in his VK Holden Commodore, Grant Dalton finished fourth in his Camaro, while Dean Perkins was fifth in his XD Falcon - having stormed from 40th position on the grid.
Adam Garwood once again starred, backing up his remarkable charge through the field in race one on Friday evening with another storming performance in today’s race. Starting 38th, Garwood was 27th at the end of lap one, 19th at the end of lap two, 16th by lap three and 13th a lap later.
He moved into the top-10 on the penultimate lap before passing three further cars on the final tour to end up sixth, and first of the Touring Car Masters runners home – recording yet another class victory in the TCM Trophy race.
Adam Bressington started sixth from the back of the grid today and neatly followed Garwood through the field, taking the Fabre / Whiteline Racing Camaro to 7th position thanks to a storming drive. Michael Eden took his Ford Falcon to eighth, Tristan Teki was ninth aboard his Chevrolet Camaro and John Midgley 10th in another Falcon.
In his first Touring Car Masters season, Mercury Comet racer Allan Boughen started on the second row and raced strongly, ultimately slipping just outside the top 10 on the final lap to finish 13th. Steven Johnson entertained with another typically entertaining drive through the field – charging to 18th position after starting third from last thanks to his excellent performance in race one on Friday.
Bowe stormed to 20th while Glenn Seton took the conservative approach and finished 38th. Jason Gomersall pitted on the formation lap to ensure he was out of the traffic, and when running in clear air was able to show the potential of his iSeek Racing Torana by setting the race’s fastest lap at 2m19.5233s.
Once again the field completed the race without the need of a Safety Car with only a few minor 'offs' and a spin involving Wayne Mercer and Eddie Abelnica causing local yellows thoughout the race.
The third and final race of the unique combined Touring Car Masters / Central Muscle Cars weekend will be the Wilson Trans-Tasman Challenge race, scheduled to commence at 8:30am on Sunday morning. The race will see the TCM competitors line up on one side and CMC racers on the other, setting up a true Aussie-versus-kiwi battle.
The grid will be determined by the finishing positions from race one, meaning Glenn Seton will lead the TCM brigade to the green flag, and Dean Perkins the Central Muscle Car contingent.
1   Colin Meadows (Chevrolet Camaro SS)  6 Laps in 14m25.5609s
2   Steven Ross (Holden  Commodore VK) 14m41.9010s
4   Grant Dalton (Chevrolet Camaro Z28) 14m55.2542s
5   Dean Perkins (Ford Falcon) 14m55.9198s
6   Adam Garwood (Ford Capri Perana) 15m00.6457s
7   Adam Bressington (Chevrolet Camaro SS) 15m01.6829s
8   Michael Eden (Ford Falcon) 15m02.1441s
9   Tristan Teki (Chevrolet Camaro) 15m02.7598s
10  John Midgley (Ford Falcon) 15m03.7991s
Bathurst TCM Touring Car Masters