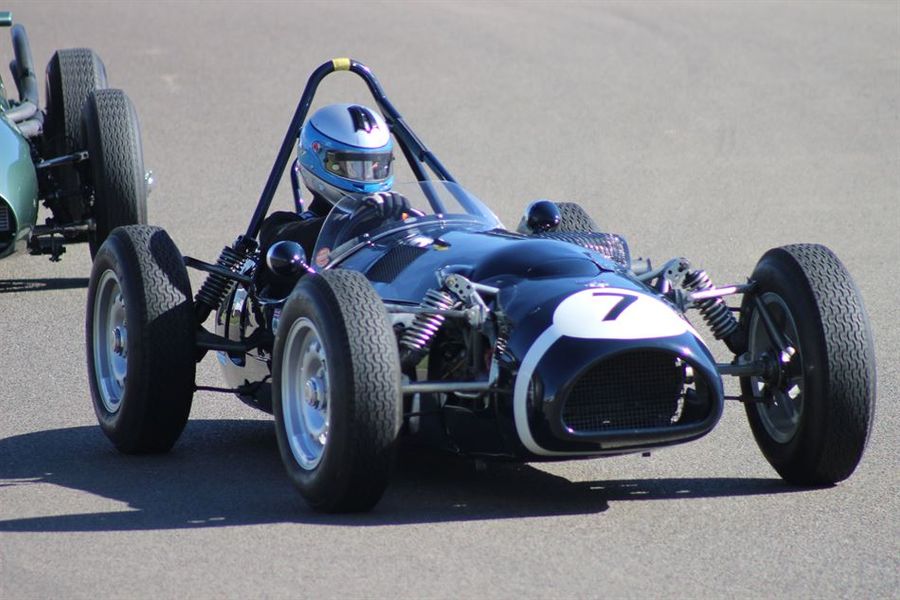 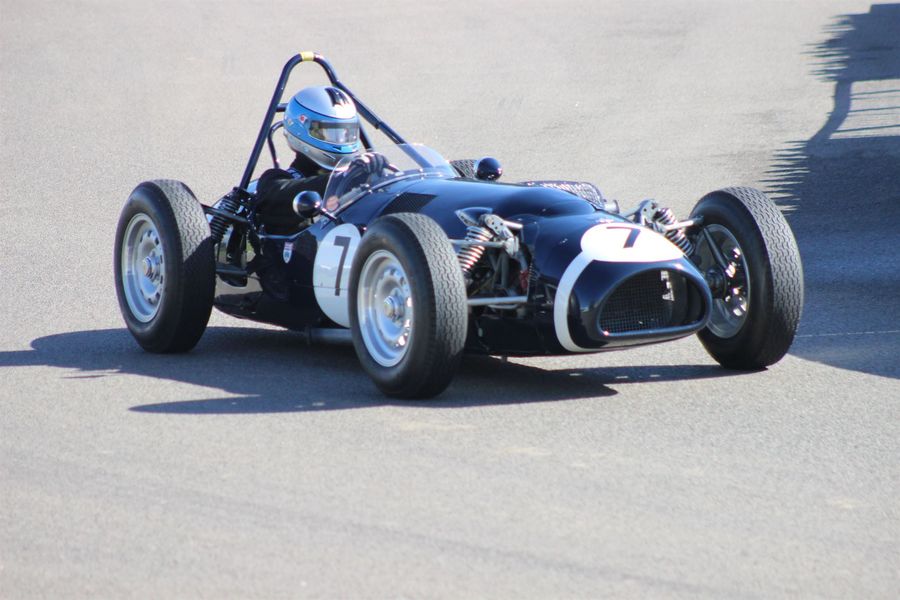 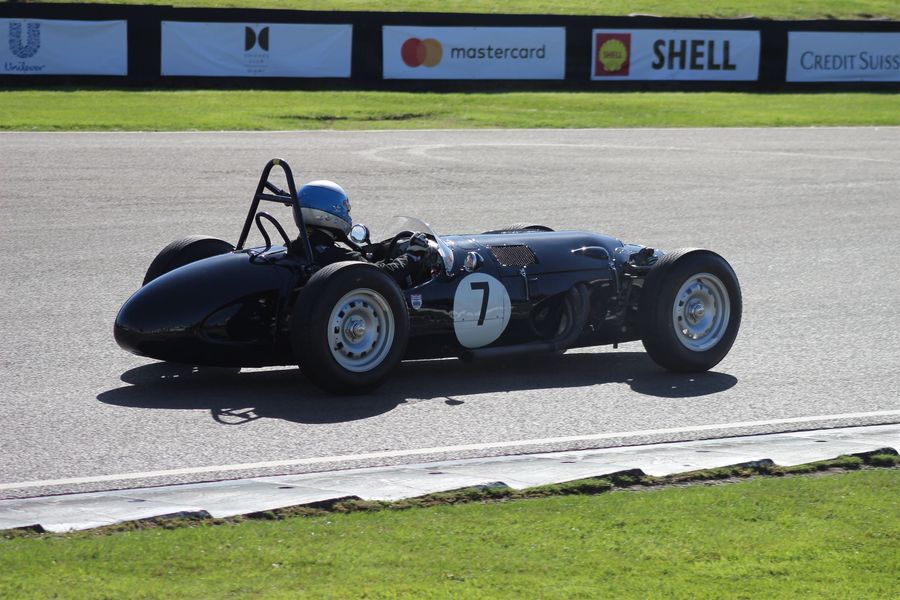 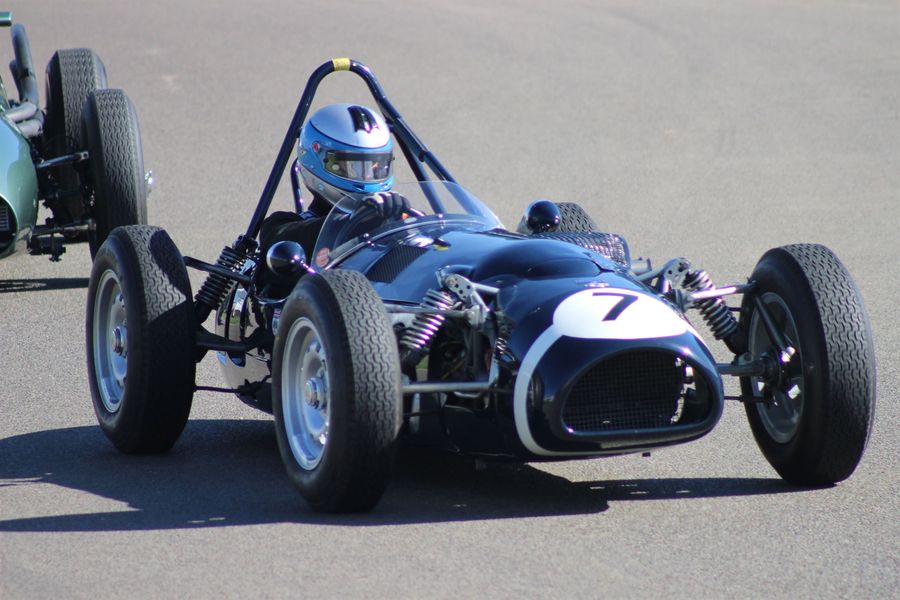 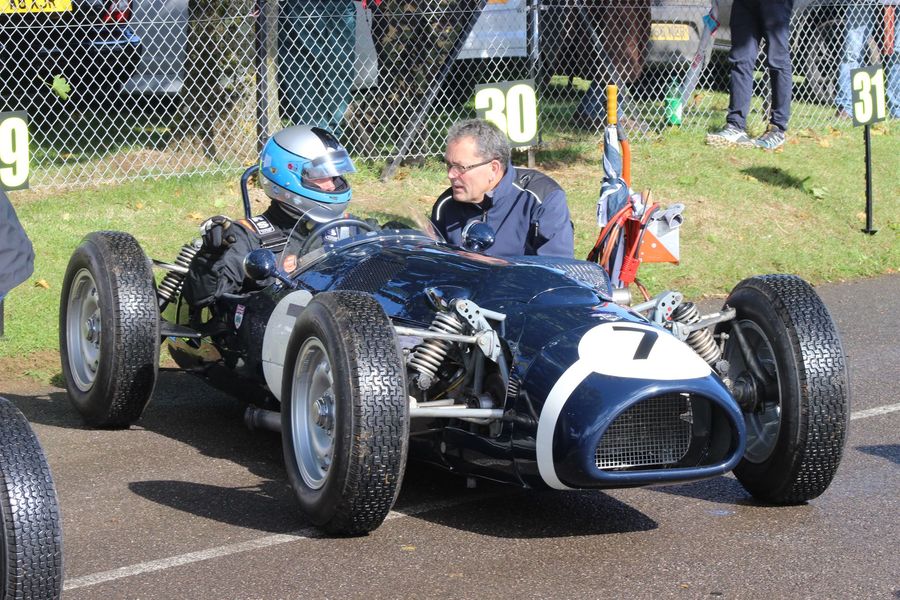 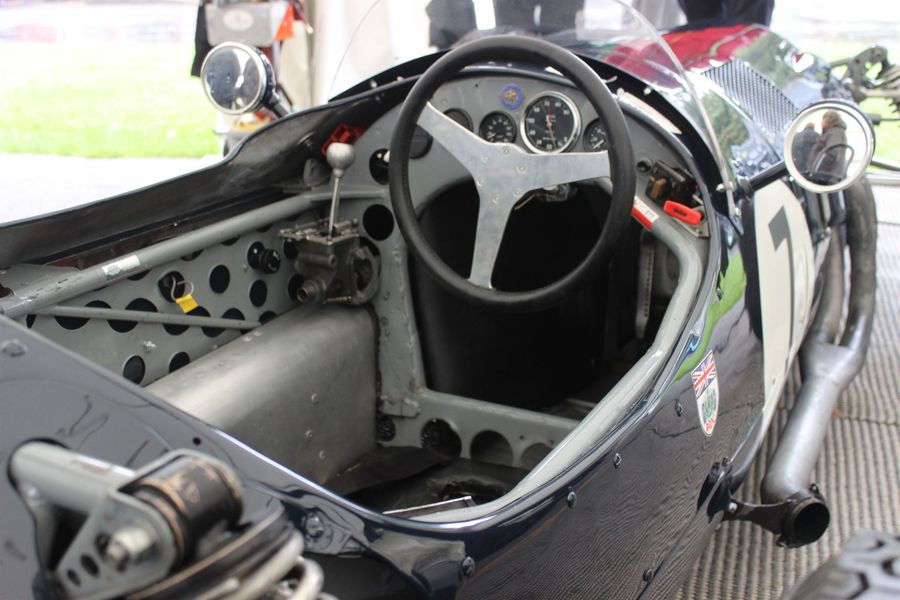 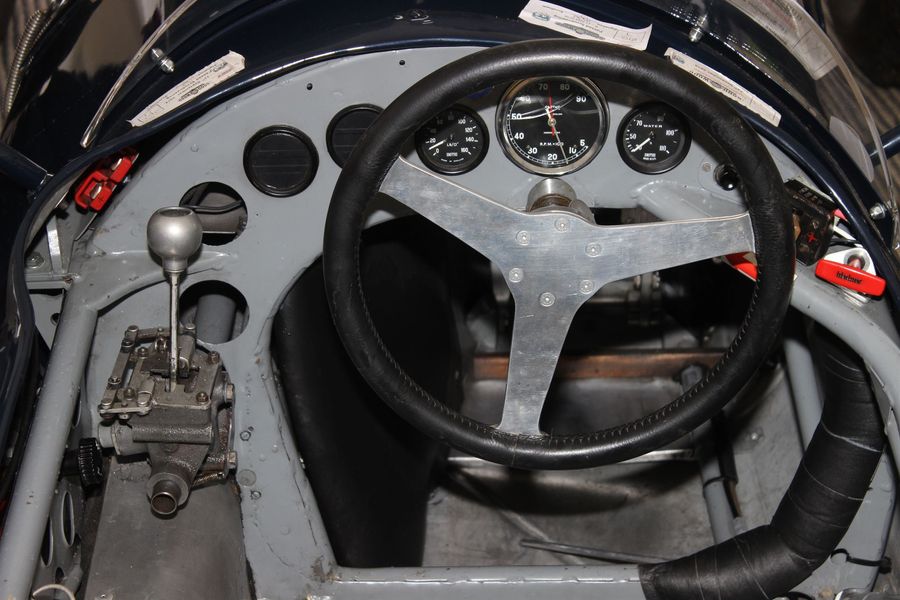 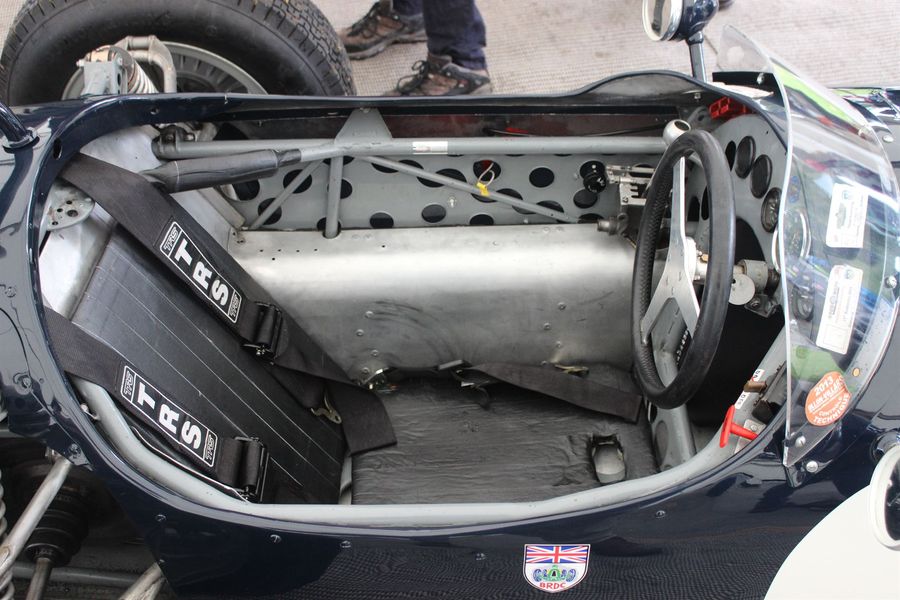 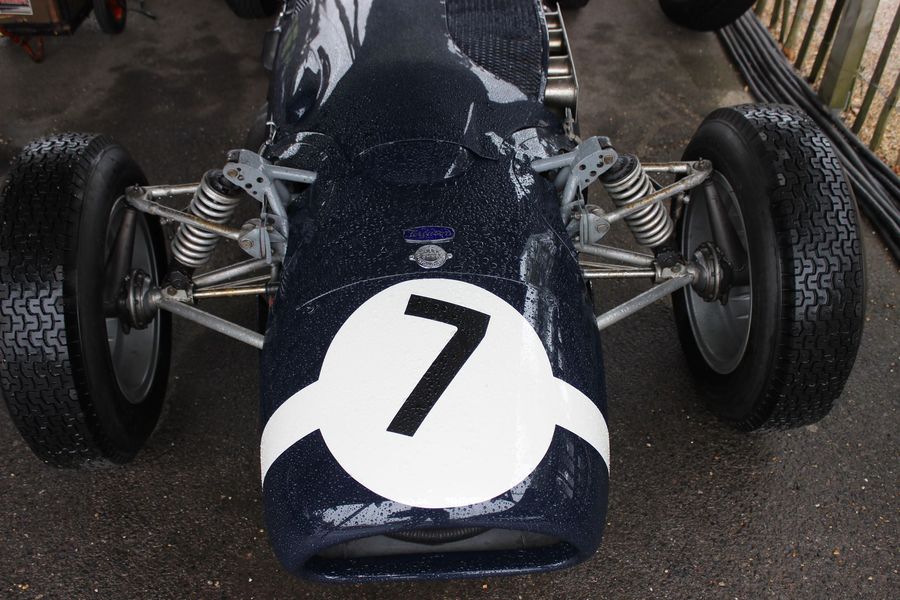 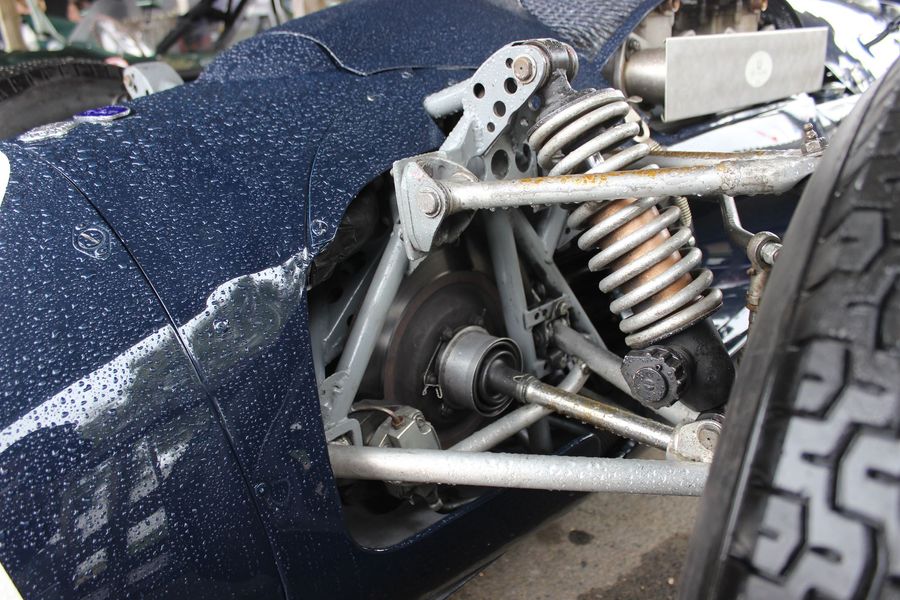 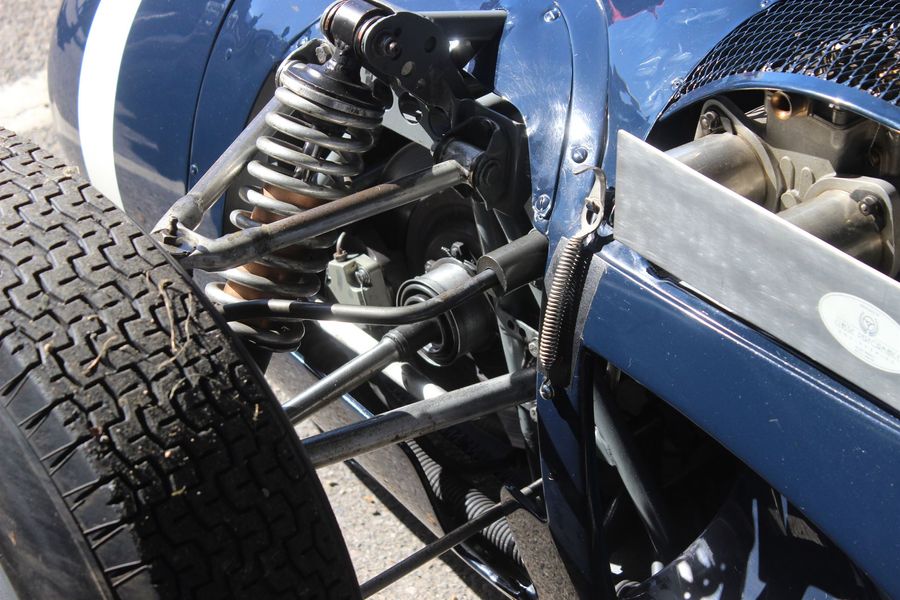 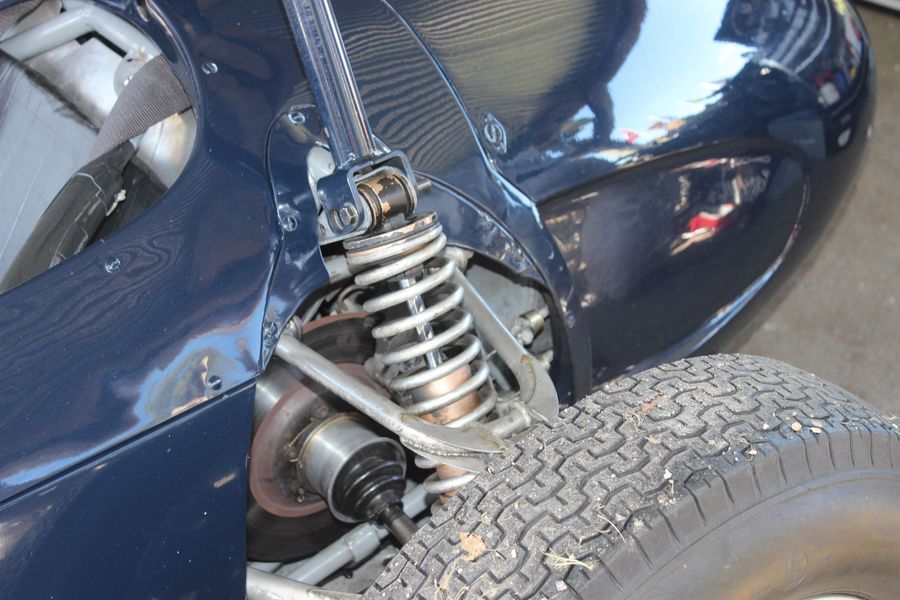 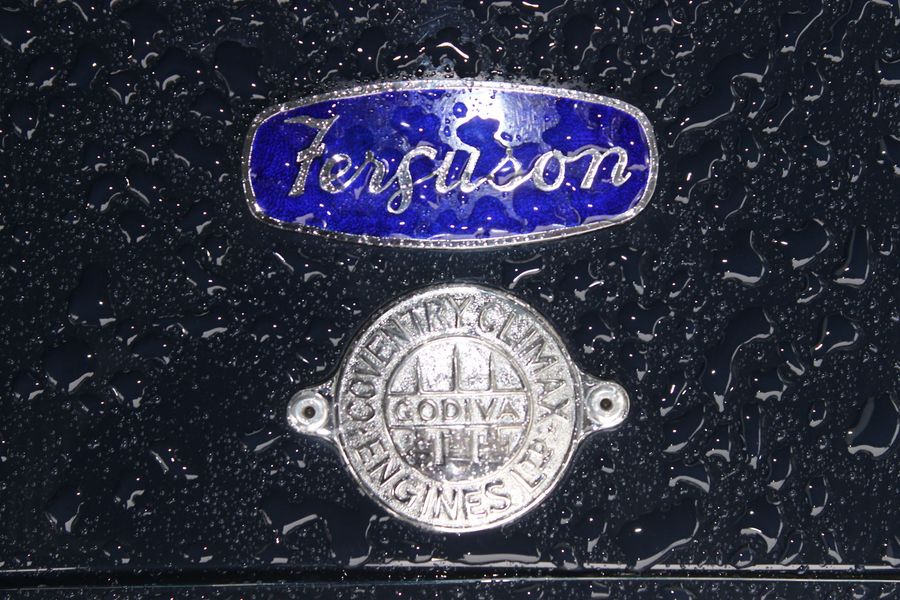 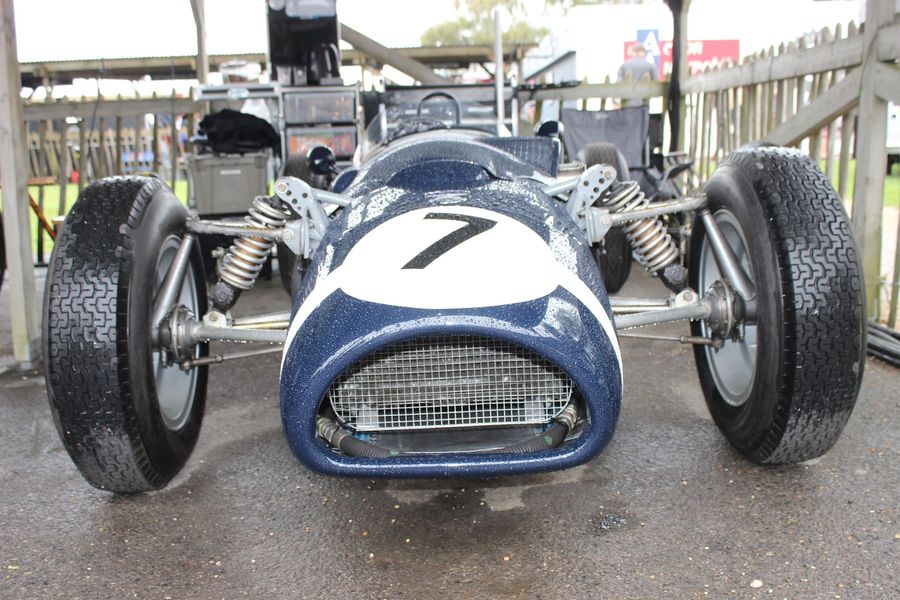 Click on the Gallery tab for pictures of the Ferguson P99, and the Video tab for the car taking on a hillclimb with Stuart Rolt behind the wheel.
A truly unique Formula One car is the Ferguson P99 from the early 1960s, built to show what four-wheel drive was capable of and remembered as the only all-wheel drive car to win a Formula One race, the non-championship 1961 Oulton Park Gold Cup.  Now a regular on the historic Grand Prix scene, the car always catches the attention of any Formula One fan with a knowledge of the history of the sport, and is raced as hard as any other historic with its superior traction paying off at race starts and in the right conditons!
It is currently owned by Stuart Rolt, son of Formula One racer, 1953 Le Mans winner, and gifted engineer Tony Rolt, and the Rolt family and the P99 have been linked for the entire history of the car, as Stuart told us at the recent Goodwood Revival.
“My father was Managing Director of Harry Ferguson Research,” explained Stuart, “which was owned by Harry Ferguson, the tractor king, and he had this vision of what cars should be like in the future. He believed four-wheel drive was the way ahead and they built the car to demonstrate what four-wheel drive could do.
“It was built at a time when front-engined cars were still competitive, but it got overtaken by the arrival of the rear-engined Formula One cars. The Ferguson family lent the car to the Donington museum where it stayed for many years, and then Jamie Shelden, Harry Ferguson’s grand-son, took the car out of the museum and got it running again.
“It started appearing at events such as the Goodwood Revival, and Jamie asked me if I wanted to buy it – and I have had it ever since. It has been in our family on and off almost all its life, with only two owners!
“The engine is pretty straightforward to keep running, it’s a 2.5 litre Coventry Climax and there are plenty of those around and people understand them. The rest of the car is unique, especially the gearbox, but we found a wonderful company Classic Performance Engineering up in Bicester, and they have looked after it for me as long as I have had it.
“Essentially if you need something you have to make it, but the car has been pretty reliable. We had an engine problem just after I acquired it, and put in a rebuilt engine, but since then it has been good. The gearbox internals are quite delicate but we have been fine there so far, and we have just had a couple of drive-shaft failures, and those can be manufactured.
“It’s lovely to have the car as part of the family. I love the interest people have in it, it looks great in Rob Walker’s colours, he was a great friend of my father and was the obvious choice to run the car for Fergusons.“
The P99 project was started by Harry Ferguson Research Ltd in 1960 when a team led by Tony Rolt and Claude Hill took on the challenge of applying a four-wheel drive system to a race car design. Not only did the resultant car have all-wheel drive, it also featured Dunlop’s Maxaret anti-lock brakes, which featured sensors that reduced the hydraulic pressure un the braking to the 10-inch inboard brake discs should a wheel lock up to optimise braking performance – though it is believed the car never raced with the anti-lock system activated.
The car was designed with a tubular spaceframe chassis with the engine and gearbox centrally mounted to give a 50:50 weight distribution. It could accept either the 1.5 or 2.5-lite versions of the commonly used Coventry-Climax race engine, with the powerplant canted at 17-degrees off vertical and angled in the chassis to minimise frontal area and allow space for a drive shaft powering the front wheels.
A five-speed gearbox was mounted behind the engine, which in turn fed a central Ferguson differential. The drive was taken from the left hand side of the differential with shafts feeding front and rear axles, passing to the left of the driver in a shrouded tunnel in the cockpit (see pictures in the Gallery) with constant-velocity jointed half-shafts to each wheel.
The car was loaned by Fergusons to Rob Walker’s race team and made its race debut in July 1961 in the British Empire Trophy race at Silverstone, though Jack Fairman retired the car which ran with the 2.5 litre engine. A week later Fairman and Stirling Moss both dove the car in the British Grand Prix meeting at Aintree, this time with 1,500cc power.
That outing set two records – the first time a four-wheel drive car competed in a Grand Prix and the last time a front-engined car did so. Moss took over the P99 after brake failure on his Lotus, but was disqualified as he had not practiced the car.
In September’s Oulton Park Gold Cup saw Moss again out in the P99, qualifying second on the grid behind Bruce McLaren’s Cooper. The intermittently wet and rainy conditions played to the P99’s strengths and Moss won the non-championship Formula One race by 46-seconds from Jack Brabham’s Cooper, still the only Formula One win for a four-wheel drive car.
The P99 contested Tasman Series races in early 1963 in the hands of Graham Hill and Innes Ireland, and then took the 1964 British Hillclimb Championship with Peter Westbury behind the wheel, the car’s traction paying off on the hills.
Video Ferguson P99 4WD Formula One Rolt Four Wheel Drive Gallery