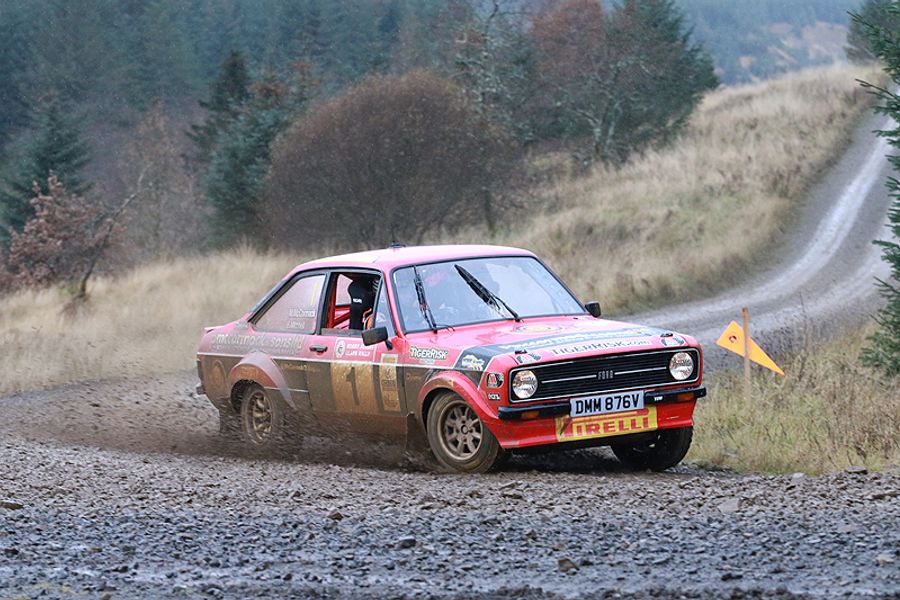 Marty McCormack and Barney Mitchell won the 2019 Roger Albert Clark Rally (21-25 November) after a fabulous battle with Jason Pritchard and Phil Clarke on the 13th edition of this unique rally.

During four and a half days, covering 300 stage miles in 31 special stages, McCormack drove faultlessly to take a 52-second victory after over five hours of flat out rallying. However, the result was in doubt until the very end as Pritchard never stopped chasing despite a puncture in Scotland on Sunday morning that proved a turning point in his rally. Both Ford Escort Mk2 crews thrilled the fans as they battled from Wales to Kielder and into Scotland.

McCormack made history by becoming the first driver to win the rally for a third time: “Absolutely fantastic! We’ve had a brilliant rally and fought hard from the start. Jason and Phil are great lads to race against and it’s been a tough battle all weekend.”

Into third after a supremely consistent performance came Roger Chilman and Patrick Walsh, while Wayne Sisson and Neil Shanks (Mitsubishi Galant) won their category as they ended the rally just one second up on the Pinto-powered Ford Escort Mk2 of Stuart Egglestone and Brian Hodgson.

Other notable performances included those of Dave Bennett/Alistair McNeil who were a Category 2-winning 10th overall in their 1600cc Escort Mk1 and veteran Bob Bean/Captain Thompson who won Category 1 in their Ford Lotus Cortina.

After the toughest and longest edition so far, a remarkable tally of 91 crews from 126 starters were classified as finishers and there were many tales of heroic efforts by service crews to keep cars running. This was a tough rally for the whole team and there was a fantastic atmosphere across the event.

Of course, no event of this scale could run without the volunteer efforts of many people, from organisers to safety crews and the all-important marshals. During the awards’ ceremony in Carlisle on Monday evening, rally manager Colin Heppenstall paid tribute to all those who gave their time to help the event run so successfully.