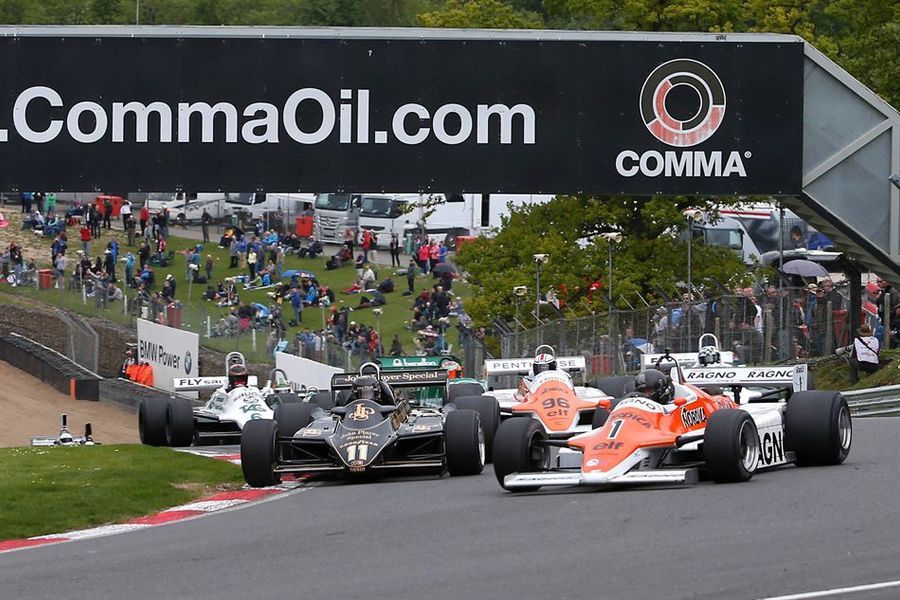 This year’s Masters Historic Festival at Brands Hatch is set to be a stunner if early entry lists are a guide. Formula One cars, sports cars, GT cars and touring cars all feature along with a celebration of James Hunt’s 1976 World Championship success, 40-years ago.
The FIA Masters Historic Formula One Championship features a superb early entry, with Christophe D’Ansembourg’s Williams FW07 squaring up against Mike Wrigley’s 1980 Williams, from Alan Jones’ championship-winning season. Rob Hall’s charismatic Ligier JS17 adds variety alongside Greg Thornton’s ex-Elio de Angelis Lotus 91/5, while James Hunt fans will be treated to James Hagan in the ex-Hunt Hesketh 308B from 1974. Philip Hall’s Theodore from 1978, the type that Keke Rosberg guided to International Trophy success, takes on Jason Wright’s Shadow DN8 and Simon Fish’s Unipart-liveried Ensign N180 will be at the sharp end of the grid as well.
Sports car fans will be treated to a tremendous spectacle in the FIA Masters Historic Sports Car Championship in which ground-shaking Lola T70s take on nimbler Chevrons and Coopers. Against the T70s of Jason Wright, Mike Donovan and Marc Devis comes Martin O’Connell in Sandy Watson’s Chevron B19, Michael Gans in his Lola T290 and local ace Nick Pink from Penshurst in his Lola T210. Real variety comes in the form of Coopers in the hands of Keith Ahlers/Billy Bellinger, the Dulon Dino LD10B of Keith Martin and the Porsche 911 RSR of Bruce White.
Touring car fans will be treated to a great spectacle as a capacity grid pits the V8-engined big bangers against the Austin Mini Coopers, notably the James Hunt tribute car in the hands of Mini ace Jonathan Lewis. The car, in its pseudo-Hesketh livery, is a real show-stopper and Lewis will be joined in the car by James’ son, Freddie.
With three-hours of action the Masters Three Hours caters for the Pre-66 GT, GTP and Touring Cars.  The grid boasts tremendous variety with Martin O’Connell’s Jaguar E-type a likely winner but he will be chased by Kiwi Roger Wills (Ford GT40), hoping to replicate his Donington Four Hours win from last July, and the AC Cobra of Chris Chiles. Jason Wright’s Ford GT40 takes on Rob Hall’s Cobra, while the beautiful Aston Martin DP214 is sure to be quick in the hands of Wolfgang Friedrichs and Simon Hadfield.  Tunbridge Wells father and son combo, Allan and Daniel Ross-Jones in their Triumph TR4 will add local flavour. They all face a tough challenge from an 18-strong Dutch invasion from the NKHTGT championship, making this a race to savour.
With Can-Am action, and the popular 70s Celebration grid all showcasing on the GP circuit, there is plenty of action to enjoy, but the James Hunt Tribute is set to be a show-stopper: Two of his Formula One Heskeths will be present, those of James Hagan and Rick Carlino, while Rob Hall will have his McLaren M23 from his championship-winning season 1976. Stuart Scott brings the Chevrolet Camaro that James drove on the Tour of Britain and Marc Devis the Gulf Mirage M6 that James co-drove to second place in the 1973 Kyalami 9 Hours. Add in the Retro F1 tribute Mini, his 1977 McLaren M26 and even his F3 Lotus 59, there is a tremendous way to remember a true British hero.
The Masters Historic Festival at Brands Hatch takes place on May 28th to the 30th.
Touring Cars Brands Hatch James Hunt’s 1976 World Championship Masters Historic Festival sports cars GT cars Formula One cars