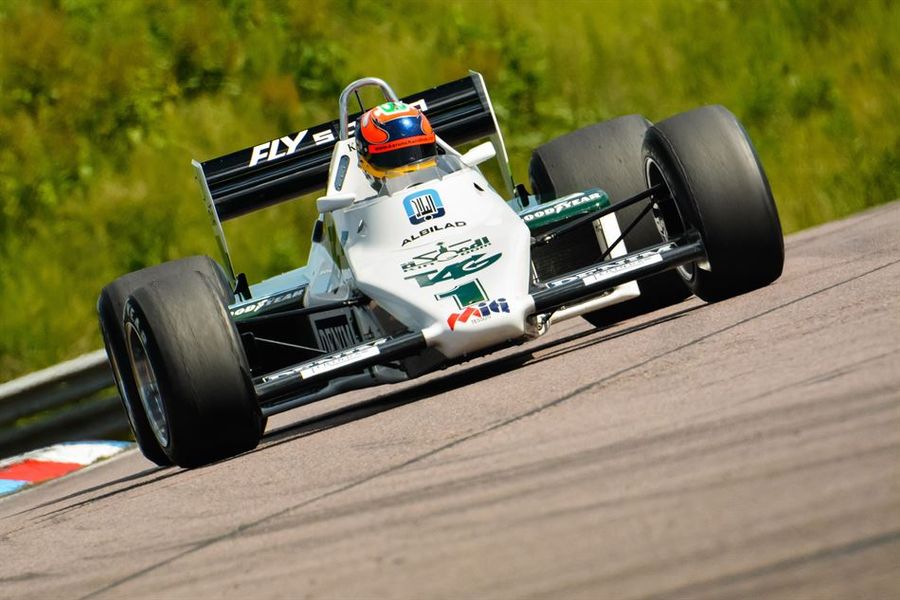 Thruxton Circuit marked its historic half-century in style over the weekend, serving up a feast of entertainment for an appreciative, sun-kissed crowd in the presence of some of motor sport’s biggest names.

The event was an opportunity to celebrate Thruxton’s past, present and future. The past was in evidence everywhere you looked, from the single-seaters, sportscars and GTs out on the track to the Williams F1 line-up in the paddock, including an ex-Keke Rosberg FW08C from 1983, Nigel Mansell’s famous ‘Red 5’ title-winner from 1992 and the last of the sport’s six-wheelers, the groundbreaking FW08B – a car so rapid it was banned before it got chance to compete in anger.

The Rosberg car took to the circuit in the hands of ex-Grand Prix racer and Channel 4 F1 pundit Karun Chandhok, whose last on-track appearance at Thruxton had been all the way back in 2003.

“I love Thruxton!” he enthused. “I remember competing here 15 years ago in Formula 3, and it’s still just as quick and still has plenty of character. I enjoy coming here because it’s different. A lot of other circuits all have the same characteristics, whereas because Thruxton is so fast-and-flowing, the racing is always fantastic with all the slipstreaming and it’s nice to go somewhere that’s got bumps and kerbs and camber in the road.

“Better still, I got to drive it in what is one hell of a piece of kit – and the first F1 car that Ayrton Senna ever tested. Its screaming DFV engine – pulling 9,800rpm in top gear – seemed to please everyone on the grass banks, and I certainly had a lot of fun!”

An ear-splitting Lola T70 and a raucous 1970 Chevrolet Camaro Z28 added to the dynamic demos in the blazing summer sunshine, while another ‘blast from the past’ was the appearance of Robs Lamplough – who contested the 1968 European Formula Two Championship race at Thruxton, an event won by future F1 World Champion Jochen Rindt. Similarly in attendance was Duncan White, whose association with the circuit stretches back even further to the very first meeting 50 years ago, when he campaigned an 1140cc Austin Healey Sprite. He now marshals at Thruxton.

Thruxton Group Managing Director Bill Coombs donned his racing helmet and overalls to climb into the cockpit of a March 733 – the car in which Ian Taylor clinched the 1973 British F3 Championship. Taylor founded the Ian Taylor Motor Racing School, which subsequently became Thruxton Motorsport Centre in 1998.

A new present and aglittering future were represented by the official opening ceremony for the new Thruxton Centre, a state-of-the-art hospitality facility that is set to transform Thruxton’s offering for racegoers and corporate guests. The honour fell to 1992 F1 World Champion Nigel Mansell and legendary motor sport commentator Murray Walker, both of whom were palpably delighted to return to a venue that holds many happy memories.

“It’s been a great privilege to be here at Thruxton with Murray – bless him, he still looks like he’s a teenager,” joked Mansell. “He’s ever the voice of motor sport and a great friend. It’s been a fantastic day for the fans, with superb weather and just a wonderful atmosphere.

“I remember Thruxton very fondly. It’s one of my favourite circuits, because it is very technical and a really demanding, ballsy place round the back with the bumps and the long corners, and the braver you are, the faster you can go. It’s one of the last circuits that has kept its identity, which is great.

“BARC have done a fabulous job to evolve, and I think the new Thruxton Centre is absolutely brilliant. What people don’t realise is just how much work has gone into it – it’s a great credit to the whole team, so congratulations to them all!”

“I enjoyed the day immensely,” echoed Walker. “It’s been lovely getting out and meeting so many people and seeing a lot of old friends. I first came to Thruxton in 1951, so I’ve got about 17 years’ advance on most people! They had motorcycle meetings back then, and I am a motorcycle man at heart and one of the greatest races I have ever seen was Geoff Duke on the works Norton and John Surtees on a self-built Vincent HRD Grey Flash battling for supremacy – the top man of international motorcycle racing against the young newcomer.

“Not only did I commentate here, but years later, I actually had Graham Hill in the box with me – you know, like a taxi driver that says, ‘I had so-and-so in the back of my cab’, I had Graham Hill and Colin Chapman in the box while I was commentating. Graham did a bit of co-commentating, and I was very pleased and proud afterwards when he said, ‘I didn’t realise it was as difficult as this!’

“Looking back, I can’t think of any other track that has changed as little as Thruxton has – it’s the same now as I always remember it, which is one of its great strengths. Not only that, but it’s in this glorious rural setting in Hampshire, you get mammoth crowds and the racing is always good and varied – I’ve seen trucks here, I’ve seen touring cars, Formula 3, Formula 2, Formula 3000, Formula 5000, even a few Formula 1 cars. It’s just a great circuit.

“This fabulous new hospitality building is what Thruxton has really needed, and now it’s here, I’m sure the venue is going to go from strength-to-strength. Sponsors will want to come here, people will want to hold events here and it will all add to the lustre of Thruxton because there’s nothing people like more than to be made a fuss of. To be brought to a building like this and shown such terrific racing like the British Touring Car Championship or British Superbikes is something, I think, that will guarantee a bright future for the circuit.”

Thruxton Group Managing Director Bill Coombs said he was delighted with the success of the milestone event.

“What a wonderful weekend to celebrate our 50th Anniversary,” he enthused. “Thruxton has earned a legion of fans over the decades, and it was fantastic to see so many of them – from Nigel and Murray to people like Robs Lamplough and Duncan White – back here again to join in the festivities.

“That said, for me – and, I daresay, the crowds enjoying the summer sunshine on the banking and in the grandstand – the cars were the real stars of the weekend, and to see Formula 1 back at Thruxton was a truly memorable moment. The awesome sound and spectacle of the Williams FW08C is something I certainly won’t forget anytime soon.

“While our Anniversary Celebration harked back to the past, our focus moving forward is firmly on the future and the new Thruxton Centre is a signal of intent as we look to continually enhance our circuit and its facilities for forthcoming generations to enjoy. Here’s to the next 50 years!”

As a footnote, finally, the second ‘Spirit of Thruxton Single-Seater Race for the Jochen Rindt Memorial Trophy’ saw Thruxton Circuit instructor Martin Bloss embody the spirit of going motor racing by claiming a brave fifth-place finish, less than 24 hours after rolling his FF2000 twice on the opening lap of Saturday’s contest.

Bloss’ mechanics worked through the night to repair the battered Van Diemen to enable its driver to make amends for his Saturday drama – proof, if ever it were needed, that the Spirit of Thruxton is still going strong, 50 years on.

Video: Round Thruxton in a Lotus Cortina!