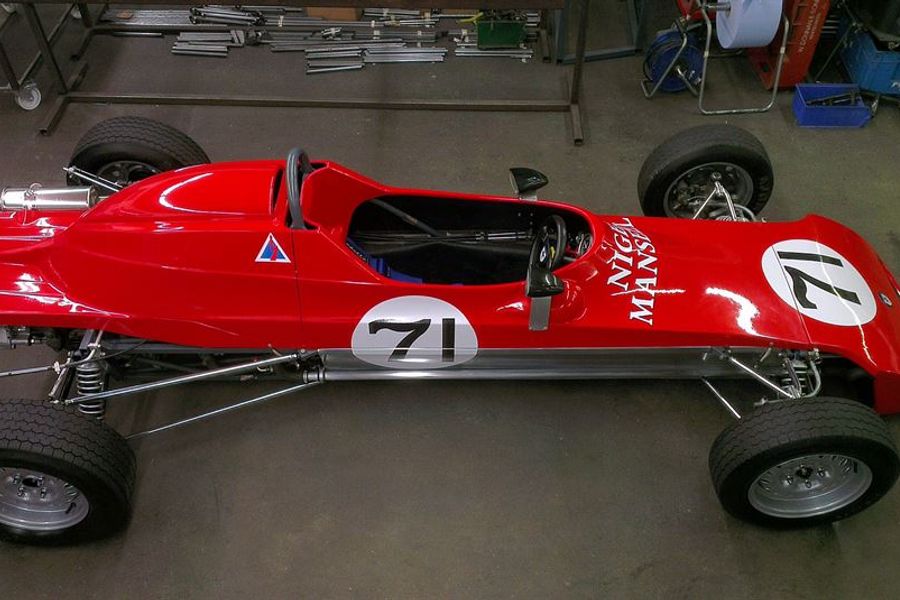 A Formula Ford single-seater, as raced by Nigel Mansell as he set out on the path to F1 and IndyCar stardom, will form the centrepiece of a special display at Historic Motorsport International. A Crosslé 32F in the colours which took Mansell to 27-race wins and  1977 British Formula Ford Championship will take pride of place on the Crosslé stand as the company celebrates 60-years of race car manufacture.
Founded in 1957 in Northern Ireland, Crosslé Car Company is the world’s longest-standing constructor of customer racing cars with almost 1,000 built to date. This year – 2017 – marks 60-years since the late Dr. John Crosslé MBE built and raced his first car, and HMI provides the perfect place to celebrate.
At HMI the company will display significant cars from its past, including some of the prettiest sports racing and Formula single-seaters from the sixties and seventies, alongside archive material from their days in top-level competition. The real excitement, however, will accompany the global launch of a new Crosslé for 2017. Inspired by iconic designs from the late sixties and developed for the Classic Racing School in France, the new single-seater blends period lines with modern convenience to appeal to a whole new world of historic motorsport enthusiasts.
Since 2012, the Crosslé Car Company has been owned by Paul McMorran. However the founding family is still actively involved with Caroline Crosslé as a director. Said McMorran: “Historic Motorsport International is the perfect event to celebrate our 60th anniversary and the special place Crosslé holds in global motorsport. HMI also provides the ideal platform to launch a new Crosslé that targets an unexplored niche in Historic Motorsport and fits perfectly with the ethos of this show. The new car represents a new direction for Crosslé that I think will generate a great deal of interest among show visitors, with simple logistics and an attractive price tag.”
Special features at the show also include the HSCC celebration marking-50 years of Formula Ford while Cosworth will be celebrating the golden anniversary of its all-conquering Cosworth DFV F1 engine.
An open forum on Thursday and Friday, the Historic Motorsport Conference Programme – hosted in the show’s Supagard Theatre by motorsport broadcaster Henry Hope-Frost – will debate a wide variety of topics including Scrutineering & Eligibility, Driving Standards & Safety and the Promotion & Marketing of historic motorsport, with many leading names and contributors set to be announced in January 2017.
Historic Motorsport International will be held alongside the London Classic Car Show, now in its third year and looking to build on the record 33,000 visitors who visited the 2016 event.
Crossle Historic Motorsport International Formula Ford Mansell HMI FF1600