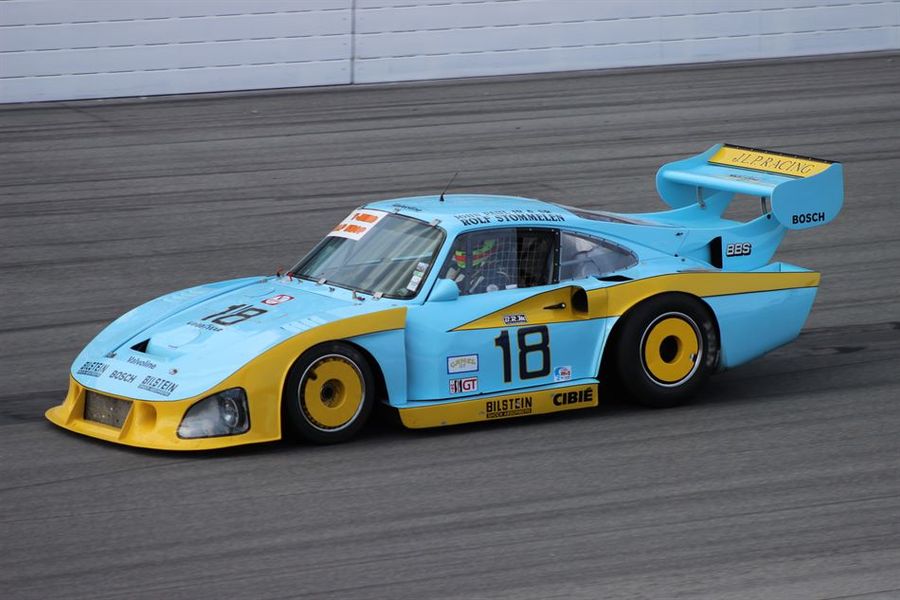 Cars were the stars at the second running of the Classic 24 Hour at Daytona (11th to the 15th November) with United Autosports playing a major role in the stellar line-up of cosmic proportions. Competing for the first time in the Historic Sportscar Racing (HSR) organised event at the famous Daytona International Speedway, the Anglo-American team left its mark on the event with its mouth-watering three-car roster amongst the spectacular 200-car, 300-driver entry.
United Autosports’ partners, Zak Brown and Richard Dean, shared the driving duties of the former's 1986 Porsche 962, 1981 Porsche 935 and 1985 Ford Mustang that had each left its mark on Daytona in their day. It had been intended that Danny Sullivan shared the driving duties but the 1988 PPG IndyCar World Series champion was forced to withdraw at the last minute due to a family emergency that necessitated Danny remained in California.
The Classic 24 featured six period-correct run groups rotating through 24 hours of racing on the 3.56-mile Daytona course. The run groups, which included various classes of similar-era racecourse, took to the track four times throughout the 24 hours. The competitors in each class covering the most total distance in their group’s four sessions were “crowned” Classic 24 at Daytona champions.
Dean cruelly missed out on winning Friday’s eight-lap qualification race when an oil breather pipe became dislodged on his leading Porsche 962, literally within sight of the chequered flag, causing a brief oil fire. Richard immediately pitted rather than taking the chequered flag and was ultimately classified sixth. In the same race, Brown netted 13th in the Roush Protofab Mustang after stopping early to swap in to the “JLP-3” 935 for the race that followed where he placed inside the top-10 – marking the first time that the Group CEO of CSM Sport & Entertainment had driven the legendary Porsche in anger.
On the advice of attending Porsche North America technicians, the team withdrew the ex-Dyson Racing Porsche 962 from further action on Saturday and recommended restricted lappery with the “JLP-3”. Both cars had received engine rebuilds at PNA since appearing at Monterey in August but both were still only in “interim” engine specification and essentially “running in” mode.
Brown lined-up the Porsche 935 ninth on the 23-car grid in the Group B race on Saturday afternoon, “JLP-3” being the first racecar to ever win both the Daytona 24 and Sebring 12 Hour races overall in the same year (1982), and ran 11th before stopping to preserve the new short-term engine. Dean started the Scott Pruett 1986 IMSA GTO Championship winning 1985 Roush Protofab Mustang in the first segment of the Group C race and had the audacity to challenge a Rothmans Porsche 962 for third place before the Ford threw its power steering belt. Richard ran the 935 in Sunday morning’s session for a five-lap systems check, nevertheless coming from the back of the grid in to seventh place before stopping.
“Being down to two drivers with three cars initially at our disposal,” explained Zak, “the Classic 24 became all about the taking part in what turned out to be a fantastic event, rich with heritage and staged at a world famous and fabulous venue in terms of DIS. We we’re essentially bedding in the two Porsches. But it’s been a great experience. Taking the start of the 24 hour race in the 935 that has such an amazing history here was awesome and something that I’ll always remember.”
“It was good to race at Daytona again,” said Richard. “The entry was huge and diverse. I was close to recording a ‘famous’ Daytona win but thought it advisable to pit when oil smoke appeared in the 962’s cockpit on the last lap which was a shame as I was only a couple of hundred yards from taking the chequered flag!
“Both Porches had engine rebuilds at PNA but it was only ‘interim’ work. We want to get both cars back 100% in the mechanical trim and parts that they raced in back in the day and with cars of their age, it takes time and patience. Having committed to the HSR in racing at Daytona, we didn’t want to let anyone down but unfortunately it meant that we had to be mechanically sympathetic to our cars resulting in the withdrawal of the 962 and restricting the lappery of the ‘JLP-3’. Zak wants both his cars to be around for a long time, they have a massive historical importance, and it just wasn’t worth the risk.”