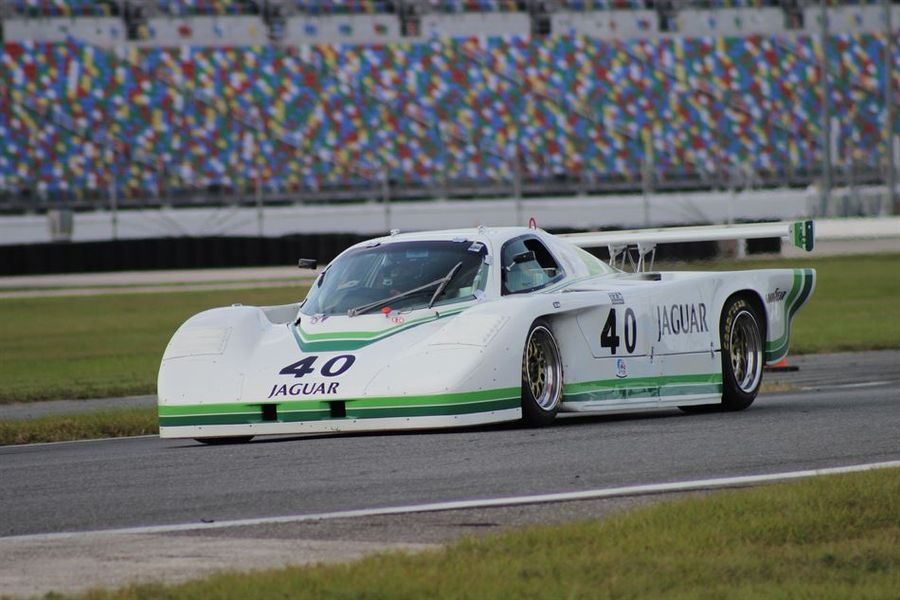 Picture: Group 44 Jaguar at Daytona (HistoricRacingNews.com)
With historic motorsport being one of the growth areas in the last decade, 2017 looks set to continue that trend with a host of major events and meetings and some significant anniversaries being marked at many of them. International highlights should include the second running of the HSR’s Classic 24 Hour at Daytona towards the end of the year, while in Europe Peter Auto have their usual calendar of excellent events as the core of a thriving historic scene and the UK is, as ever, host to a wide range of events.
The UK 2017 calendar has hopefully now settled after being in a state of flux after date changes in the FIA Formula One calendar saw both the Goodwood Festival of Speed and Silverstone Classic forced to change dates. Goodwood moved to avid clashing with the race in Baku to ensure it could still attract Formula One teams and drivers, while the FIA moving the date of the British GP back a week in turn saw the Silverstone Classic move – it taking more than one week to change the circuit from one hosting a Grand Prix to one capable of taking on many thousands of historic cars, both on the track and on display.
So – where would we like to be this year?
We are currently heading into the ‘show’ season, with Autosport International in Birmingham next week and usually offering a few historic gems tucked away for the discerning visitor.
In February in the UK we have the established Race Retro exhibition and the bold newcomer Historic Motorsport International – which due to some unfortunate timing are taking place over the same weekend. As this makes no business sense for either it was undoubtedly unavoidable, most likely due to HMI’s association with the London Classic Car Show which has had its Excel slot booked for some time. We aim to visit both, and will be interesting to see how they position themselves in future years to avoid further clashes.
The Goodwood Members’ meeting is always an early season delight, albeit one to wrap up warm for! In contrast to the circuit’s revival meeting the organisers can go out of context on the cars they invite – hence the recent Group C display – and as ever the meeting offers access to most of the cars being raced or displayed.
A goal of ours this season will be to attend more VSCC meetings, the popularity of the Vintage Sports Car Club’s racing and meetings stands as proof of the enduring appeal of their vintage racers. We are embarrassed to admit that Shelsley Walsh is a venue we have yet to attend – so the combining the two would be a delight.
The HSCC are one of a number of people picking up on the 50th anniversary of Formula Ford, and despite the age of some of the cars the racing at the front provides a fine reminder of the heyday of the 1600cc cars when over 200 would contest Brands Hatch’s season ending Formula Ford Festival. Their visit to the Kent circuit in July is on the full Grand Prix layout rather than the Indy version used for the Festival – but should still provide some great racing.
Looking further afield the Spa-Classic in May always provides great racing at a classic venue, and this year Peter Auto have added a meeting at the Hungaroring at the end of September to their roster which could prove interesting and may see some cars rarely seen at other meetings in action.
We visited Daytona in 2015 and greatly enjoyed the Classic 24 Hour at Daytona, a refreshing contrast to European meetings with the emphasis on the competitor’s experience as much as spectators – probably sensible as even 10,000 spectators would look lost in Daytona’s huge swathe of seating!
In fact, the longer we work on this piece the more places and meetings that spring to mind! The early season events in New Zealand and Australia always look from a distance to be well organised and provide a worthwhile reminder of the place in motorsport history of those countries, their thriving race scenes over the years and the drivers they have produced.
While we always enjoy the major set-piece meetings such as the Silverstone Classic and Goodwood, sometimes the lesser promoted meetings can provide quality racing in a more relaxed atmosphere. If you have the chance, take in the VSCC at Cadwell Park, or the HSCC’s contribution to the Oulton park Gold Cup meeting.
We are working on finishing our 2017 calendar – and will aim to provide reminders of what is in store as the season progresses!
Looking Ahead HMI Race Retro