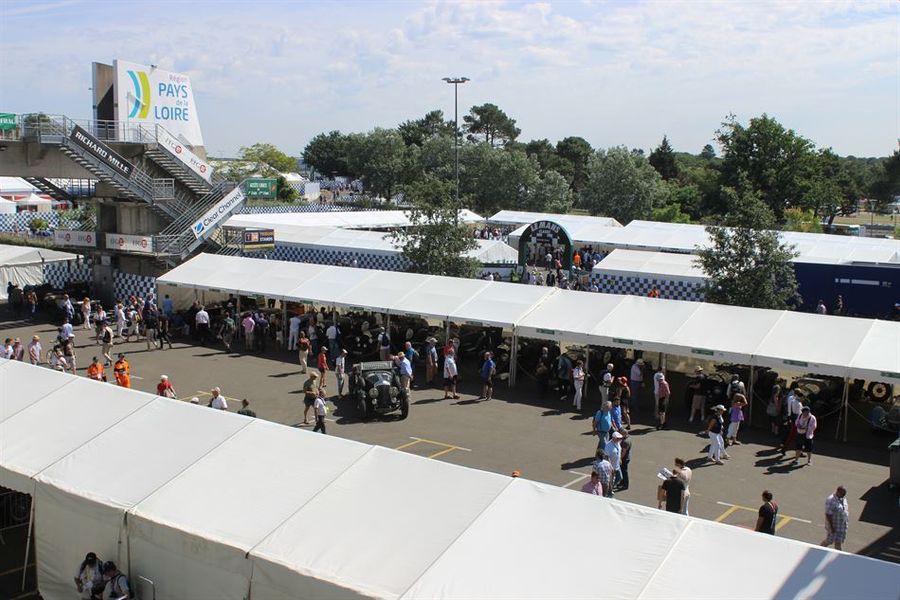 By any measure the Le Mans Classic is a big event. Even leaving out the impressive fields in the two support races, the six ‘plateaus’ of cars that actually provided the 24-hours of racing meant there were well over 400 historics out there racing covering a span from 1926 to 1979, providing something for any connoisseur of classic motorsport to enjoy.
The level of British involvement is strong, not only with many regulars of the British historic scene out on track but also in the large UK element in the crowds. Where once the annual exodus to Le Mans was for the 24-Hours itself, our ferry out of Portsmouth on Thursday night had a true Le Mans feel with some glorious cars checking in to make the crossing. The site of a laughing check-in girl trying to reach down from her booth to the upraised passport clutching hand of a Ford GT40 driver is not one you see every day.
Peter Auto’s slick organisation made signing as media straight forward but the first thing that would have hit anyone arriving at the circuit was that it was hot. Really hot. Trying to conform to the requested media dress code –shirt and trousers effectively – left us sweat-sodden wrecks before we have even hauled out kit up to the media centre above the pits. At least we had the respite of being to get some cover there, even though Sunday was cooler there were still a lot of people hunting down the shade all weekend.
The action on the track was also hot as in each of the plateaus the front-running cars racing hard. The format of the event, with a winner on cumulative time over all the races for each plateau meant any issue or non-finish would put a car out the running, but none of the racers chasing the win seemed to be playing safe.
The quality of the racing was underlined by the number of ‘name’ drivers out there. Former Le Mans and Daytona 24-Hour winner Andy Wallace claimed plateau two in a Jaguar D-Type, while triple Le Mans winner Marco Werner shared the lovely plateau six winning Porsche 936. The high profile of historic racing was emphasised by Romain Dumas, who had only won the 24-Hours at Le Mans three weeks before, being back at the circuit to drive a newly rebuilt Porsche 962 in the Group C support race (see our Romain Dumas interview in ‘news’).
A number of drivers raced in multiple plateau, and on entering the circuit on Sunday morning (yes…we sneaked back to our gite on Saturday night) we bumped into a very weary looking British racer who commented on being delighted he had a whole three hours to recover before being back out on track again. It was not uncommon to see a race suited figure being rushed by quad bike or similar from one plateau paddock to another to get back out in his next car.
You could quite happily have spent the whole three days of the event touring the paddocks, village and the over 180-car clubs present without seeing a car on track and still have had a great weekend. The Goodwood style paddocks meant few cars were tucked away out of site and virtually all were accessible and very visible, with many owners as ever delighted to show off their toys. The village offered everything from car models through team clothing to electric scooters, designer chairs, and a range of vintage rallies, and the efforts of Peter Auto to periodise the village with live music etc. added to the atmosphere.
The event broke its own attendance record with 123,000 spectators, and the variety of entertainment on offer meant that hopefully most of them went home happy. We managed to prise ourselves out of the main paddock area near the end and watched the final plateau six race from the revised Arnage viewing area, where the new spectator banks provide a view up the track of cars coming into Indianapolis, while the sight of cars twitching under power out of Arnage is always exciting.
The event was well put together and the evocative ‘Le Mans’ starts were exciting, though we did pity some drivers who seemed to be left standing on the side of the track for several minutes in multi-layered race suits and helmets under a blazing sun before being given the signal to run to their cars!
So, would we recommend the Le Mans Classic as a historic event? We have to say a very big yes. With cars coming together from across the world it was great to see many we had not encountered before (having first gone to Le Mans during the Group C era we like to think we know a bit about those racers, but there were at least two types of cars there we had not seen before).
If you have the opportunity to get to the next one in 2018 – go! You won’t regret it and the Le Mans Classic is certainly an event for your historic bucket list.
Le Mans Classic

Gallery: Look Back at Silverstone