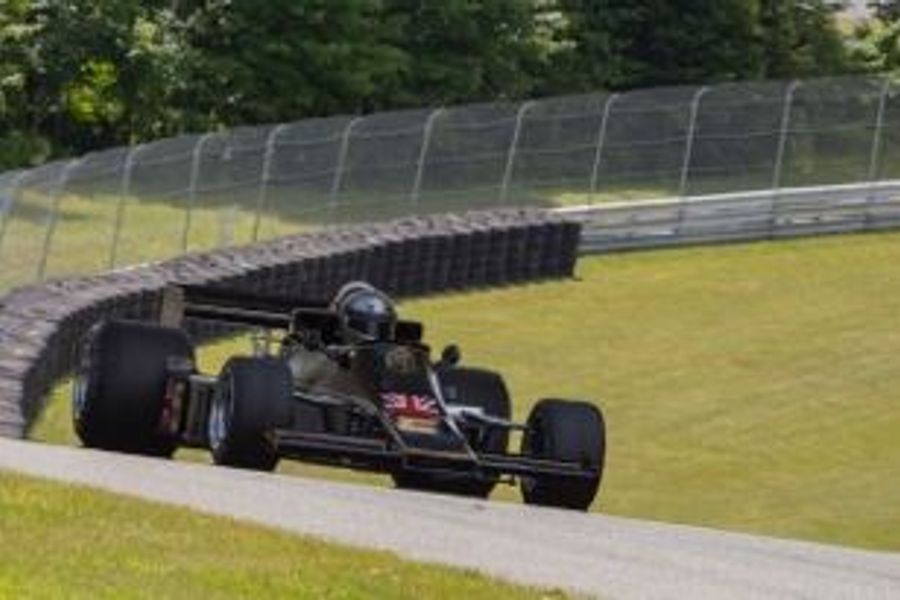 Chris Locke was the man to beat at Mont Tremblant at the weekend as the Masters HGP field made the second stop of its 2014 tour. A couple of the Masters European regulars made the trip to join a great selection of USA-based cars, including Bud Moeller's sensational ex-Gilles Villeneuve Ferrari 312T5, Doug Mockett's unique Wolf WR6, John Delane in Tyrrell 002, Chris Locke in the elegant Lotus 77, Howard Cherry's March 761, Charles Warner's ex-Jan Lammers Shadow DN9B, and the two orange Marches (one Beta, one Jägermeister liveried) of Robert Blain and Steve Cook. In addition, a rare sight was the unique BRM 207 of Brian Blain, in its pale blue Rotary watch livery and making rare music from its three litre V12, the final incarnation of the famous name under in 1977. Of the Europeans, James Hagan in his newly-acquired Tyrrell 011 looked the greatest threat to the Home Team. The Canadian fans were to be thrilled by the quality field, with practice, qualifying and Race One all happening in 25 degree heat under sunny skies, in this beautiful corner of French-speaking Canada. Chris Locke emulated Mario Andretti and qualified on pole in 1.33.694, from Moeller and Hagan, with Robert Blain, Howard Cherry and Doug Mockett not far behind. Steve Cook's Jägermeister March sadly fell victim to scavenge pump troubles, but he was generously loaned Bud Moeller's spare car, the ex-Derek Daly Ensign MN179 to start at the back was instructed to take care! Saturday's opener was run in hazy 29 degree heat, and behind a dominant Chris Locke, battle raged between Moeller and Hagan over the entire race, with the Irishman getting past a couple of times, including on the last lap, but the hugely experienced Moeller and the wailing Ferrari claimed second place. Behind them, Howard Cherry and Doug Mockett ran closely throughout with Steve Cook enjoying his ground effect baptism in the Ensign and gradually closing in on the fourth and fifth-placed men, but not quite close enough: the F1 cars made a fine and evocative sight at this great track. By contrast, Sunday dawned wet and dank, with occasional heavy rain, and these were not the right circumstances, it was decided, to run a formal second race. So, a number of hardy souls set off in the gathering gloom for a fast laps demonstration, which proved that Doug Mockett and his WR6 really do enjoy the wet!