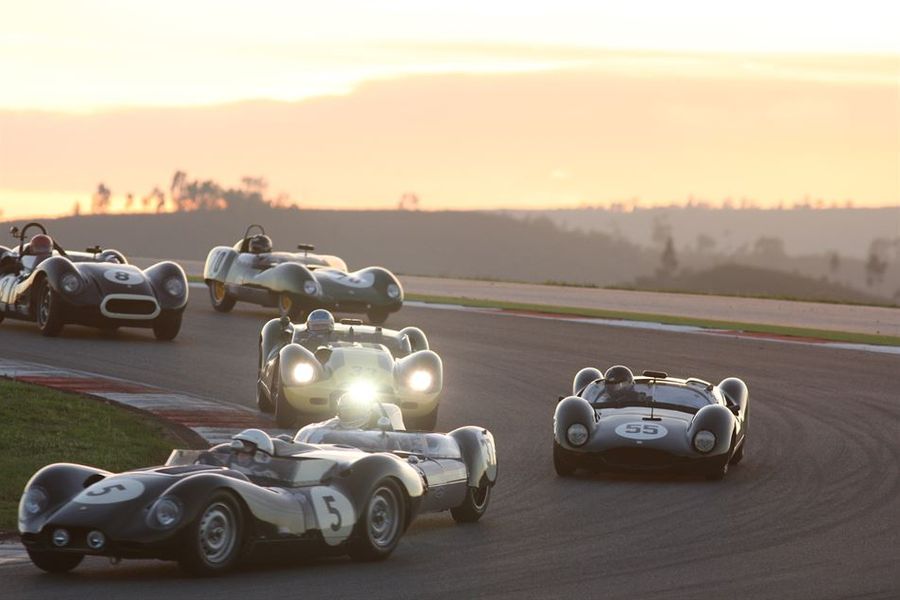 At their awards dinner in January Motor Racing Legends announced a ground-breaking scheme to certify race engines in historic cars in two of their series, and we spoke to John Hopwood, a key driver behind the scheme about the thinking behind it, how the idea involved and why he thought it was so necessary.
The scheme was unveiled by MRL Chairman Duncan Wiltshire who said in January: “The introduction of this certification programme is a major initiative in the battle to control over-development of engines in the Historic racing world.  We will be applying the certification scheme across our Touring Car and 50s Sports Car series. The announcement has been welcomed by competitors keen to see an end to over-sized engines.”
John Hopwood is a scrutineer of many years experience who devised the engine certfiation programme with Wiltshire and a man who has been deeply involved in historic motorsport with organising clubs and the MSA.
“In a current race car you will have much tighter regulations, probably also have a brand-new unmolested version of the car you can use as a comparison, and modern competitors expect to be checked and for you to go to the nth degree,” explained John. “ If you were to take the first three cars in any historic race, seal the engines, and say ‘we are going to strip those’ – they’d be up in arms, apart from the fact that you may be about to destroy an unobtainable head-gasket or something like that.
“I used to the eligibility scrutineer for the Ford Fiesta series, and we would usually seal an engine almost every round, which was how those sorts of series worked. Historic motorsport used to be for slightly eccentric gentlemen in oily cars who were out to have a good time, but it is no longer that sport. It is now another mainstream form of motorsport, we have preparers who have abandoned modern motorsport as they can’t make any money at it, and they can preparing historic cars. We also have some very wealthy, driven, successful gentlemen, perhaps not so good in the cockpit as they could be, who expect to be at the front of the grid and tell the preparers to get them there.
“I have heard stories now of cars having ‘qualifying’ engines that will only last three or four laps, with teams swapping engines before the race. I am told we have Lotus Cortinas revving to 9,500 and giving 190BHP, and I know that Jim Clark’s works car had about 140. There are some enormous differences to when these cars originally raced, dampers are better, oil is better, balancing is better – and that is something we can do nothing about and it isn’t illegal, but there are other things going that may be.
“We would hate to have to say we would take the first three Lotus Cortinas in a race and strip down the engines – but maybe that is where we have to be.
“I sat down with Duncan Wiltshire and we wracked our brains about what we could do and I came up with the idea of issuing an engine sealing certificate, we measure bore and stroke on homologated cars and valve sizes. This year it will be optional, but for next year we will make it compulsory, and if a car has had this done we would indicate it on the entry list and result sheets, so that could encourage people to have it done.
“We have had a fantastic response, people have welcomed it with open arms. We have had people happy to take heads off fresh engines, though we have also had people who have had new engines built and don’t want to do it – and to them we say ‘please don’t take the head off, at some time during the year we can do it or at season end’.
“We are not doing anything sophisticated yet like measuring conrod lengths – but that could come.
“I am sure we will see this happen in other areas of historic motorsport. The FIA have picked up on it and other organisers have looked at it. IT is so easy, the cost of certification should be as low as £25, you get your local scrutineer to turn up with a couple of seals, you seal the sump or front cover so you can’t take the crank out without breaking seals,. We don’t want people to seal heads on as that means you can’t change a gasket or something without breaking it.
“We are trying to make sure that what we have being raced now bears a relation to what was raced in period but also it is a comfort for the other drivers to know things are relatively even – now the guy who is getting thrashed can actually think ‘maybe it is just me!”.
John Hopwood MRL Engine Certification Motor Racing Legends