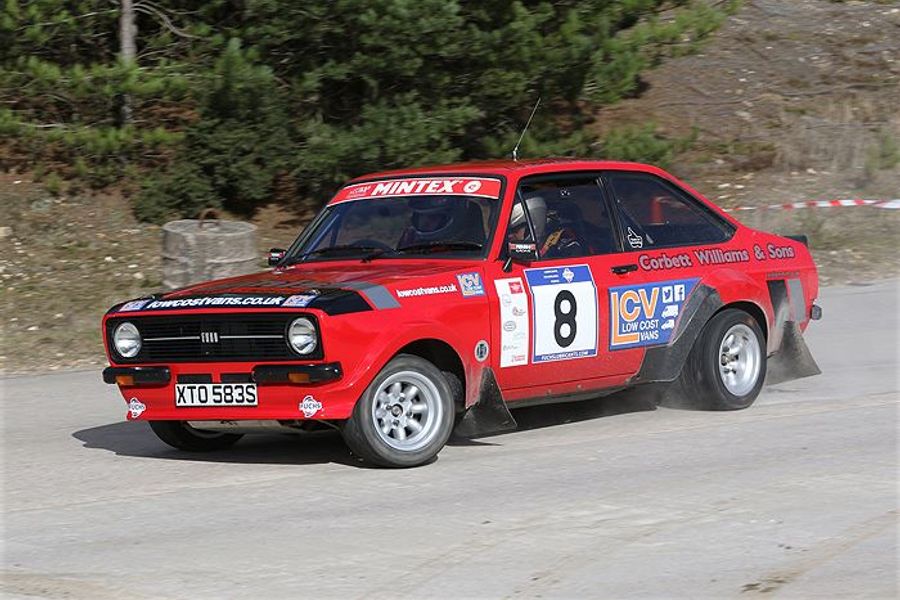 Local experts Neil Williams and Roger Moran head the contenders in the 2017 Fuchs Lubricants R.A.C. Historic Asphalt Rally Championship into round three, the Welsh Marches Mini Epynt Stages on Sunday 4th of June.
Both drivers have good knowledge of this challenging and spectacular venue and should set the pace among an excellent entry of 15-historics. The Welsh Marches Mini Epynt Stages is unusual in that it only uses the roads at the Western side of the Epynt ranges and the 10-stage event has already proved to be a popular addition to the Fuchs R.A.C. Championship.
The Fuchs Lubricants R.A.C. Historic Asphalt Rally Championship is organised by the Roger Albert Clark Rally Motor Club and is a dedicated asphalt championship for all categories of historic stage rally cars.
Williams and Peter James (Ford Escort Mk2) were winners of round one and will use their established Epynt pace to head the field but can expect a big challenge from the mighty BMW M3 of Moran and Keaton Williams. Excellent news is that a second M3 joins the championship in the hands of Paul Smith and Tudor Jenkins. Fresh from the previous day’s Severn Valley Stages will be the Escort Mk2 of Barry Stevenson-Wheeler/John Pickavance while another crew with prior knowledge of Epynt is Lyndon Barton/Simon Hunter in their Escort.
After a hefty accident on round two in Belgium, Graham Muter and Colin Watson revert to a 1600cc Escort Mk2, while Epynt ace David Kynaston fields his thundering Triumph TR7 V8.
Maintaining the variety that has become a feature of the championship is the Hillman Avenger Tiger of Ian Robertson/Andrew Scott in the Capital Construction Category 2. The Vintage Car Radiator Company Category 1 entry is capped by the Porsche 911 of championship pacesetters Dessie Nutt and Geraldine McBride, with the MG Midget of Bob Seager/Simon Hannam leading the chase.
Joining the field for this event are four crews staying over from Saturday’s Severn Valley Stages to get some Epynt mileage ahead of the Mintex MSA British Historic Rally Championship round on the Harry Flatters Rally at the end of July. Nick Elliott/Dave Price, Rudi Lancaster/Guy Weaver, Simon Webster/Jez Rogers and Ben Friend/Cliffy Simmons are all very rapid Ford Escort Mk2 crews and will be switching their cars to asphalt trim following Saturday’s gravel rally.