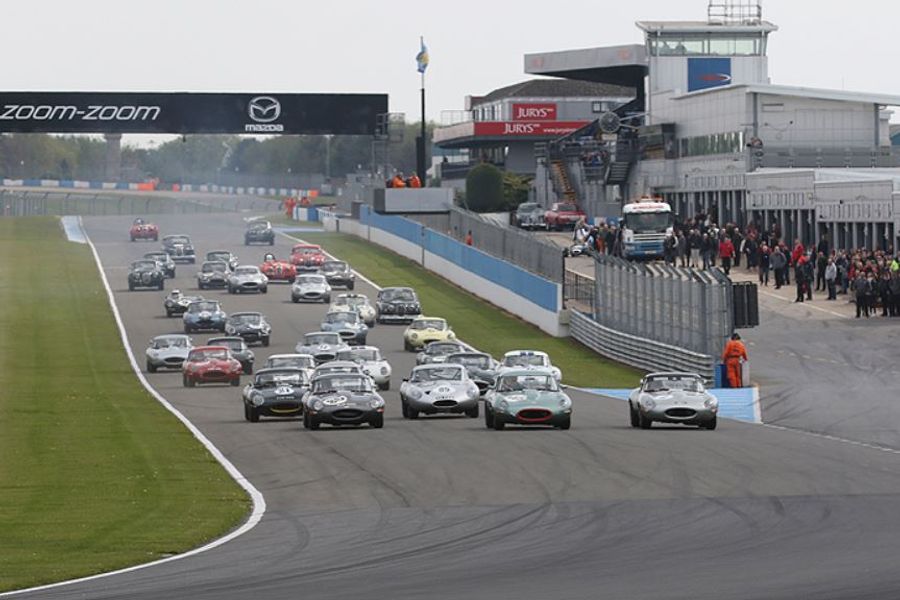 Four grids from the Historic Sports Car Club will feature at the Donington Historic Festival this weekend (4th-6th May) during one of Britains most important historic race meetings.

The opening rounds of the Jaguar Classic Challenge, Super Touring Car Challenge and Derek Bell Trophy will be joined by four races for the FJHRA/HSCC Silverline Formula Junior UK Championship.

Heading into its fourth season, the Jaguar Classic Challenge has drawn a superb entry for the hour-long race at the end of Saturdays race programme. The series is managed by the HSCC and is a fitting way to honour Jaguars outstanding sporting heritage. While the E-type is easily the most popular model, several earlier cars, including the MK1 saloons of Diane Osborne and Roger Cope and a clutch of XK120s and XK150s provide the variety.

However, the battle at the head of the race will be among a pack of quick E-types including the car of Jon Minshaw, who won the E-type Challenge in 2011. The highly experienced historic racer is also a successful modern GT racer and he shares the E-type with his GT co-driver Phil Keen to make a very strong pairing.

Ranged against the Minshaw car are two E-types from the stable of Scottish enthusiast Sandy Watson. The driver line-up involves Andrew Kirkaldy and Martin OConnell, so both cars will be right at the forefront of the action. So, too, will the car of 2016 JCC winner Julian Thomas, which he shares with Calum Lockie.

With more quick E-types in the capable hands of Alistair Dyson, Ian Simmonds, Paul Castaldini and Sheffield-based Jamie Boot, it is a superb line-up to get the 2018 series off to a flying start. The hour-long, pit-stop race, with the option of two drivers per car, should be a fitting curtain closer on Saturday.

Jason Minshaw (Volvo S40), James Dodd (Honda Accord) and Keith Butcher (Audi A4) are all regular front-runners in the series, while the crowd-pleasing John Cleland (Vauxhall Vectra) is a keen supporter of the series. The Scot was BTCC champion in 1991 and enjoyed a tremendous career as part of the works Vauxhall squad.

Jason Hughes is running in the new class for Super 2000 cars with the MG ZS he raced in the BTCC more than a decade ago, while the earlier cars are headed by the BMW M3s of Nick Whale and Mark Smith. Like Cleland and Hughes, Whale raced this type of car in the period BTCC.

New on the roster for the Donington Historic Festival is the HSCC Derek Bell Trophy and the powerful single-seaters will be the fastest cars of the weekend.

However, this is not just about the thundering F5000s as the best of the 2-litre cars will be snapping at the heels of the leaders. Local racer Steve Seaman (Ralt RT1) and Mike Bletsoe-Brown (Chevron B27) will be to the fore, along with sometime F5000 racer Mark Dwyer, who has switched back to his very rapid Formula 2 March 742 for the event.

There are two Formula Junior grids, with a total of almost 60 cars, forming rounds three and four of the FJHRA/HSCC Silverline UK Formula Junior Championship and the weekend marks the return of the category's Diamond Jubilee World Tour to British soil.

The tour started in 2016 in South Africa, followed by sectors in Europe, Australia, New Zealand and North America. The Tour concludes this summer with UK races at the Donington Historic Festival and Cadwell Park later in May before the grand finale at the Silverstone Classic in late July.