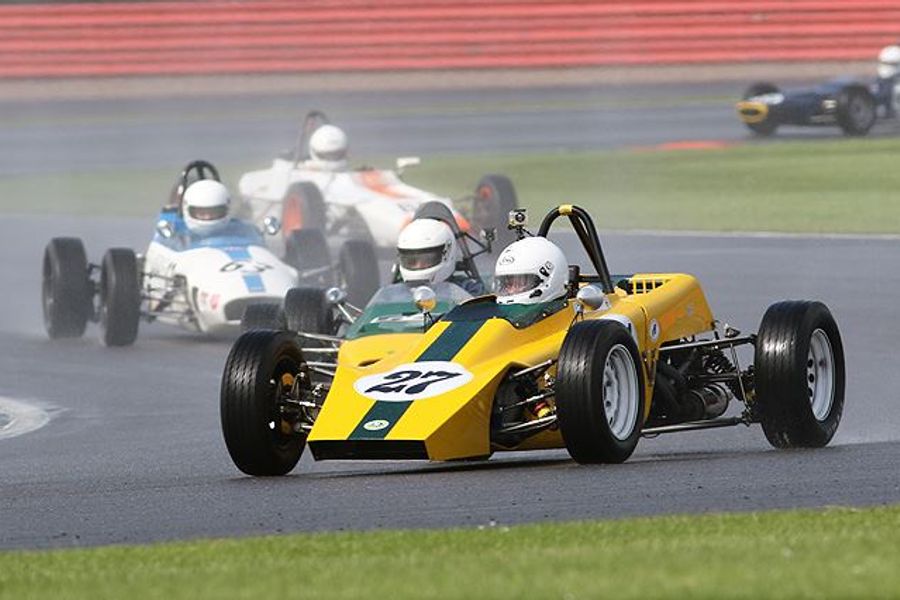 Four categories from the racing portfolio of the Historic Sports Car Club will be in action at the Silverstone Classic (July 28th-30th), the world’s biggest historic and classic racing festival. Historic Formula Ford, the Jaguar Classic Challenge, the Super Touring Trophy and Formula Junior are all on the schedule for the fabulous weekend on the Silverstone Grand Prix circuit the Club is also responsible for organising the racing element of the event.
An over-flowing grid of cars from the HSCC’s Historic Formula Ford 1600 Championship will feature prominently with two races, which are sure to deliver some of the weekend’s closest racing as the Club’s 50th anniversary celebrations for the category continue.
Though not a round of the season-long championship, all of the leading contenders will be there. The 54 places on the grid were filled immediately and regular championship supporters were given priority. There are currently 12 reserve entries hoping to get a place on the grid.
At the head of the action will be 2017 title contenders Callum Grant, Michael O’Brien, Benn Simms, Sam Mitchell and Benn Tilley as well as former F1 racer Tiff Needell. As with all Historic Formula Ford races this season, there will be tremendous battles all the way down one of the biggest grids in the 50-year history of Formula Ford in the UK.
The third round of the Jaguar Classic Challenge will be another highlight with the third of five 2017 races. While the E-type is far and away the most popular model on the grid, several earlier cars, including the wonderful D-type of Ben Eastick/Karl Jones and saloons like the Mk1 of Roger Cope, provide the variety.
The Julian Thomas/Calum Lockie E-type could well set the overall pace but can expect some fierce opposition, including from a pair of E-types entered by Sandy Watson. He will share the driving with Martin O’Connell and Andrew Kirkaldy, and both cars should be right in the mix.
Jason Minshaw shares the car of Martin Melling and will be firmly in the lead pack, and local racer John Pearson is another E-type racer with experience to spare. Jamie Boot and Mike Wrigley are both podium contenders, while model expert Jeremy Welch will share a car with Jean-Marc Rivet Fusil.
More fantastic single-seater racing is assured in a double-header for Formula Juniors. Although not a round of the championship organised by the Formula Junior Historic Racing Association and the HSCC, there is still a full grid and reserves from the cars built between 1958 and 1963. The global popularity of Formula Junior is remarkable and the category is currently building towards its Diamond Jubilee year in 2018.
The entry is packed with quality, both in the front and rear-engined classes and there is a gaggle of contenders for the overall podium. Sam Wilson (Lotus 20/22) has a fine record at this event but faces major opposition from the similar Lotuses of Michael Hibberd, Katsu Kubota and Martin Walford along with the Brabhams of Cameron Jackson and Mark Shaw and the rare De Tomaso of Westie Mitchell. Among the earlier front-engined cars, leading drivers include Will Mitcham (U2 Mk2) and Stuart Roach (Alexis Mk2).
The JET HSCC Super Touring Car Trophy has Touring Cars from 30 years of the BTCC for a double-header and, in a new development, the pair of races will feature split grids. First away will be around the Super Touring cars from the 1990s and half a minute later the Group 1 and Group A cars will be released.
Several star name entries will grace the field, including Gianfranco Brancatelli who will race the Eggenberger Ford Sierra RS500 he took to victory in the 1989 Spa 24-Hours with Win Percy and Bernd Schneider. Meanwhile, Australian touring car legend Jim Richards will be re-united with his 1985 Australian title-winning BMW 635 CSi.
Stand out among the Super Touring entries is double winner from Donington at the start of the season, James Dodd (Honda Accord). Other rapid cars from the 1990s include the Honda Accord of Chris Beighton and the Nissan Primera of Australian visitor Phil Mauger. Meanwhile, two Volvo S40s will race together as the car of regular UK racer Jason Minshaw is joined by the Lindsay O’Donnell car from New Zealand.