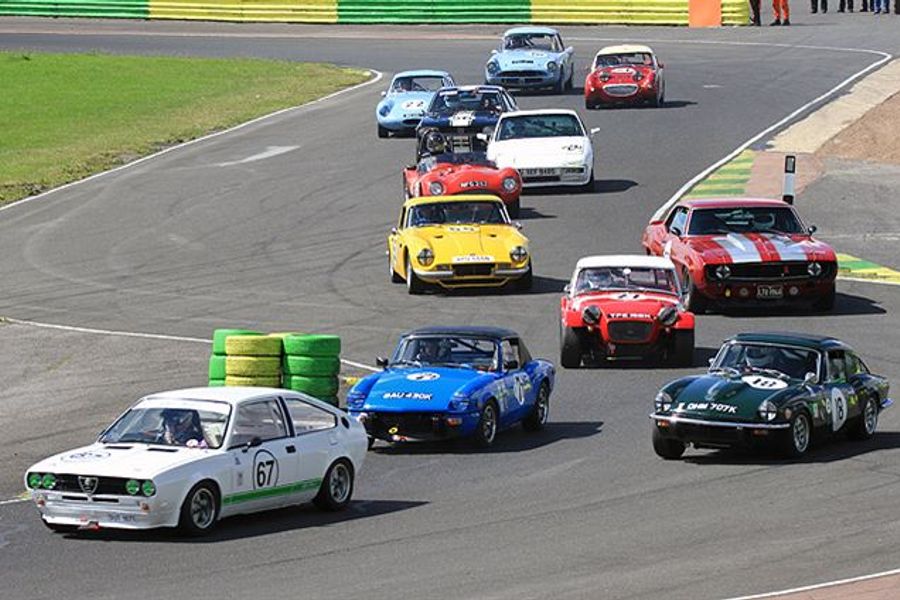 The annual Croft Nostalgia Festival (6th and 7th of August) was another hugely successful event in the Historic Sports Car Club’s 50th anniversary season with some great competition across 19-races.
The weekend was named in honour of one of the founding racers, Stephen Curtis, who raced in the inaugural Griffiths Formula race at Castle Combe in 1966. Remarkably, Stephen is still an active racer, half a century later.
Notable successes in a superb weekend of action included a double win in Formula Ford 1600 for Callum Grant, a 70s Road Sports double for Jim Dean and a provisional Historic FF2000 Championship title for Andrew Park.
The Croft weekend marked round five of seven for the Guards Trophy with a race on Saturday delivering overall victory for Hugh Colman in his Chevron B8 from the similar car of Charles Allison and Peter Thompson. The mighty TVR Griffith of Mike Gardiner and Dan Cox again topped the GT cars and took a fine third overall from a strong field.
A fabulous entry of Historic Formula Ford 1600s demanded four races to ensure everyone got to race at least twice and it was 2012 champion Callum Grant who was the class of the pack with two wins in the points’ scoring races. Rob Wainwright twice led the chase of the winning Merlyn Mk20 in his Elden Mk8 and then switched cars to score a double victory in the combined Classic Racing Cars/Historic Formula 3 races. Wainwright was at the wheel of a rare 1970 Crossle 18F Formula 2 car recently restored at the race preparation business he runs with his father Gerry.
Andrew Park took a win and a second in the Historic Formula Ford 2000 Championship to make him provisional champion, subject to official confirmation. With key rival Benn Simms absent following recent engine problems, Park was once more on top form in his Reynard SF81, although in the second race he was headed by the flying Andrew Smith (Royale RP27).
The Historic Touring Car Championship delivered more crowd-pleasing action and a double win for Mark Jones (Lotus Cortina) despite a major challenge from the Ford Mustang of Warren Briggs. In the second race Briggs lost a lot of time off the start and had to fight back up to second, dealing with impressive teenager James Clarke (Lotus Cortina) in the process.
Out-going champion James Dean won both rounds of the 70s Road Sports Championship in his Lotus Europa and kept Julian Barter (Lotus Elan) at bay in the process, while Kevin Kivlochan (Morgan +8) twice topped the concurrent Historic Road Sports despite a stern chase by the Ginetta G4 of David Boland.
Simon Armer’s March 703 headed the Historic Formula 3 Championship contenders to boost his title hopes with two maximum scores, while Jonathan Hughes (Brabham BT6) scored a weekend double win in the Silverline UK Formula Junior Championship. However, it was very close on Sunday as he beat teenager Cameron Jackson (Brabham BT2) by less than a fifth of a second. John Sykes made a piece of Formula Junior history by racing the rare Merlyn Mk2 for the first time and twice finishing as leading front-engined car.
Mark Charteris and John Harrison had two good battles in the Classic Clubmans Championship for the rapid front-engined sports racers, before Charteris was able to pull clear. Finally, James Dunkley took an impressive pair of wins in the Lackford Engineering Midget and Sprite Challenge from an excellent field.
The Croft weekend action was filmed by the SSTV team on behalf of the HSCC and an hour-long programme will be produced for Motors TV, with transmission dates to be advised shortly.
Historic Sports Car Club’s 50th anniversary season Croft Nostalgia Festival