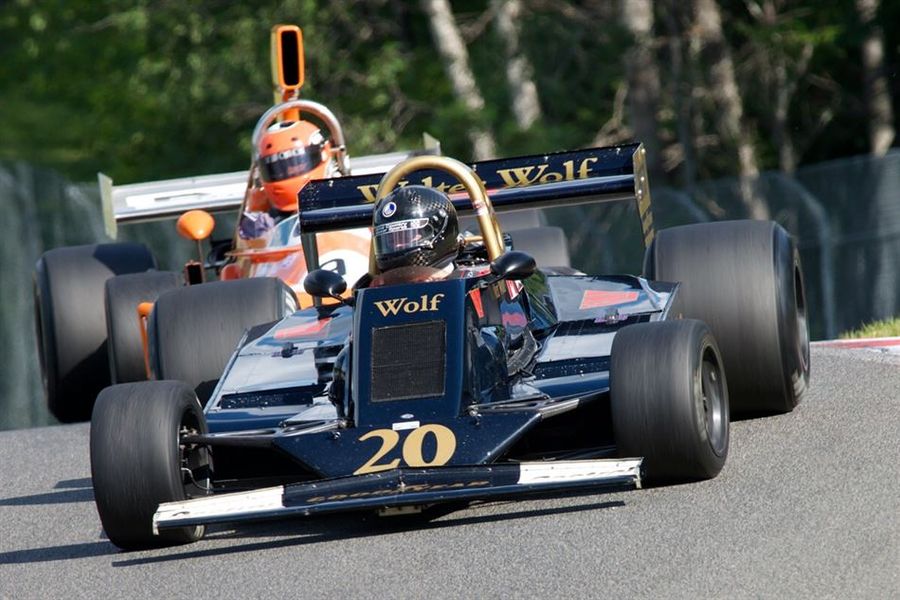 A clutch of Masters HGP’s drivers are heading back from taking part in the Masters Historic Formula One race in support of the Singapore Grand Prix in time for the annual CSRG Charity Challenge at Sonoma this weekend (October 4/5). Ten of the Masters HGP drivers tackled the testing heat and turns of the Marina Bay street circuit in Singapore last weekend. Canadian Keith Frieser and John McKenna were the North American stars as they headed back home, with Frieser’s in the ex-Jackie Oliver Shadow DN1 the best placed in race one, seventh, and McKenna’s Parnelli VPJ4 taking seventh in race two. Starting 15th on the grid for the opening race, Frieser charged through the pack on the narrow street circuit to take an amazing fifth place in the opener, while McKenna’s drive in the second stanza put him just over a second clear of nearest rival Tommy Dreelan (Williams FW08). Doug Mockett chased hard in his ex-John Watson Penske PC4 taking a brace of second places in the unofficial Masters HGP class, while Sean Allen took two top 10 overall finishes in his ex-Alain Prost McLaren M30. Chris Locke thrilled fans in his ex-Mario Andretti Lotus 79, taking an 11th and a 12th overall, while John Delane (Tyrrell 002), Rick Carlino (Hesketh 308C) and Harindra da Silva (Shadow DN3) all raced competitively. Sadly, Robert Blain suffered two retirements in his March 761 due to electrical gremlins and Danny Baker retired his McLaren M23 from race two due to a broken front upright after finishing 11th. As the Singapore explorers head home, they will be faced at Sonoma by Brits Larry Kinch (Ferrari 312T5), Nathan Kinch (McLaren MP4/1B) and Greg Thornton (March 761) in an entry 20-car entry that offers a snapshot of how F1 looked in the 1970s and early 80s. Said Chris Locke: “Racing at the Singapore Grand Prix was pretty cool. The Marina Bay is street circuit is very challenging and the crowds were massive and enthusiastic. It was an amazing experience, especially with the current F1 drivers and teams taking a big interest in our Masters HGP race. Sonoma is, of course, a completely different type of circuit but is also challenging, and it is a circuit well suited to Masters HGP cars, with fast, sweeping turns and elevation changes. This Charity Challenge event also serves a good cause, with proceeds donated to Speedway Children’s Charities, and it is always well-attended by enthusiastic fans. The fact that it is in California’s Wine Country with easy access to San Francisco also makes it a great destination – and a great finale to an incredible first season of Masters HGP!”