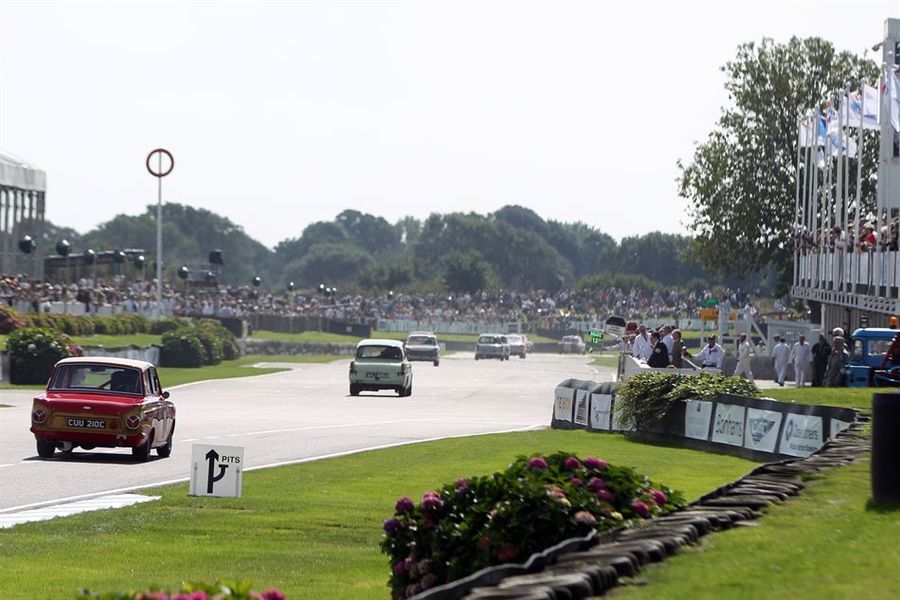 The 2016 Goodwood Revival opens its doors for business on Friday morning with yet again all the signs that the event will be a highlight of the historic motorsport year. The extensive race entry is littered with recognisable names and cars, while the two main themed tributes, which take to the track each day of the event, are enough by themselves to ensure the event was a sell-out long ago (though hospitality packages are still available!).
Full race entry: http://bit.ly/2cjQpSZ
This year’s tributes remember the great Sir Jack Brabham, triple Formula One World Champion, and look back at the ‘return to power’ in Formula One, when engine capacity jumped from 1.5 to three litres in 1966. Sir Jack was a fearsome competitor in an age littered with exceptional drivers. Goodwood has long links with the Brabham family and a range of cars spreading across single-seaters, sports cars and saloons associated with Sir Jack will take to the track, 50-years after he became the first driver to take the Formula One title in a car of his own construction.
Three of the Brabham-Repco Formula One cars that he campaigned so successfully in the mid to late 1960s are expected on track, as well as up to eight of the Coopers he had his early success in. A trio of Aston Martins, including a DB3S and a DBR1, remind us of his early sportscar days, while a might Ford Galaxie 500 will attest to Sir Jack’s saloon prowess, and a 1970 Matra-Simca MS650 should sound magnificent!
The Formula tribute reminds us that 1966 saw cars with a number of solutions to the jump in capacity and power, Ferrari opting for V12 solutions, while BRM produced the amazing three-litre H16 engine. An era where the cars looked elegant and largely sponsorship free, the whole game was changed in 1967 when Lotus produced the type 49 with the Cosworth DFV bolted on the back, and very soon cars had wings, logos, and money started coming into the sport.
Four Lotus 49s are expected, as well as Andy Middlehurst’s Lotus-BRM 43, which was demonstrated recently at the Oulton park Gold Cup meeting. A 1968 Ferrari 312 should provide V12 musicality, while cars from BRM, Cooper and McLaren should give a proper Grand Prix feel to the demonstrations
Friday is largely a day of qualifying for the extensive field, but early evening will see the first race of the weekend, the Kinrara Trophy, a 60-minute two-driver event for pre-1963 GTs. From then on the weekend is in full race flow with a constant stream of great track action, on two wheels as well as four, with the usual Goodwood dilemma of when to move from track side to enjoy the many other joys the meeting has to offer.
It is the sheer atmosphere of Goodwood that delights, the care that has been taken to ‘dress’ the circuit with a period feel, and the fact that cars are readily accessible in the wooden ‘stalls’ mean you can stand and stare at that car that entranced in your younger days. With the majority of visitors also adopting that period feel in their dress – it I easy to get a hint of how the track must have been in its heyday.
The event is as ever more than just about the cars, with the extensive village across the road well worth a visit for the stalls offering everything from a haircut through to a classic car, while we always enjoy a quick wander through the aircraft display that reminds us that as RAF Westhampnett Goodwood was a key World War II fighter base.
Matra-Simca MS650 triple Formula One World Champion Aston Martins Sir Jack Brabham DB3S Brabham-Repco Formula One cars 2016 Goodwood Revival DBR1

Fifty Years in Formula One for Sir Frank Williams!